An introduction from the Chairman and Team Principal

The Spanish Grand Prix is always a significant moment in the season. It marks the return to Europe and it’s the moment when the Formula 1 development race really begins. At Force India we have some upgrades to bring to the car in the coming races and I’m excited to see how things will unfold. 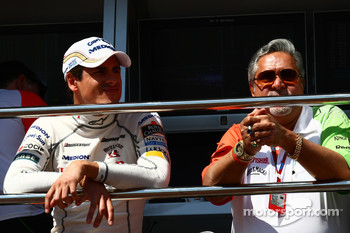 We started evaluating those changes at the last race in Turkey by running a new front wing during free practice. It was a shame that it was wet because it limited our test programme and we chose not to run those new parts for the race. We are now analysing what we learned and hopefully we can add this new package to the car either in Barcelona or Monaco, depending how things go. When our new aerodynamic developments are in place, I’m confident we can take a step forward in terms of performance.

As for the racing so far, I think the new rules have certainly achieved their objective. The races have been very exciting and the new Pirelli tyres and DRS have helped to add more unpredictability. I believe this close racing is great for fans of our sport, who can look forward to more of the same this weekend. Hopefully both Force Indias will be in the hunt and challenging for points.

A chat with Adrian

We quiz Adrian on the challenge ahead this weekend.

Describe the Barcelona circuit in three words... Fast, challenging and well known. Which part of the lap is most challenging? 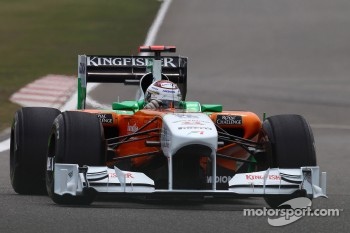 The first three corners are quite difficult. It’s a quick complex and it’s important to get turn one right to have the correct line through the next couple of corners. In qualifying trim, turn three could be taken flat.

What's the secret to setting a quick lap time?

The first and second sectors are high-speed and you need to have the right aero balance. But the final part of the lap is quite slow and the mechanical set-up is more important. The difficult thing is to find the golden middle.

Overtaking has always been difficult at Barcelona – will that change this year?

Yes, I think we should see some overtaking. There is a long straight and tyre degradation will be high. I’m sure the race will be a bit different to what we have seen in previous years.

How do you spend a free evening in Barcelona?

I like to go to the city centre, but that’s a bit far away from the circuit. So normally I just have dinner with my friends at the hotel or in a nice local restaurant.

Paul jots down his thoughts ahead of race number five. 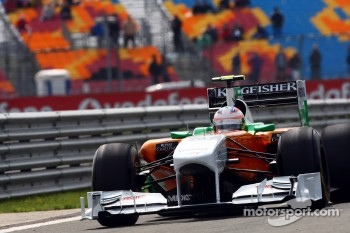 I’m really looking forward to this weekend because I probably know Barcelona better than any other track on the calendar. We did two tests there in the winter and I had four days in the car so I already feel quite well prepared. In fact, it’s a track that all the drivers know like the back of their hand and the teams have so much data already.

It’s usually a race where all the teams bring upgrades so we will need to take a step forward if we want to stay in the mix. We evaluated a new front wing in Istanbul and we hope to have more steps coming through in the near future. The team has been working hard on this new concept and everybody is quite upbeat about its race introduction, so that’s something to look forward to.

The aim for the weekend is to hopefully get back in the points. We’ve been pretty close to the top ten in all the races so far this season, so hopefully we can stay in the hunt.

1) It’s a nice city: there’s a lot to see and a lot to do away from the circuit in the city centre.
2) Beautiful weather: it’s usually very warm and sunny in Spain at this time of year.
3) Great restaurants: I always enjoy trying the Spanish food such as paella.
4) Crowded grandstands: there are always loads of fans, which creates a good atmosphere.
5) First ‘real’ European race: it’s always a special feeling when the European season kicks off.


There are always loads of fans, which creates a good atmosphere

The Force India F1 Team Academy burst into action last month as karting trials got underway across India in search of the country’s next driving superstar - quite literally a hunt for one from a billion. 100 of the regional finalists will advance to the National Finals in Goa this September before the ten most promising candidates will come over to Silverstone for the grand finale in October. The winners will be announced at the Indian Grand Prix and will enjoy the support of the team as they embark on a professional career in motorsport. For more details about the Hunt, please visit www.onefromabillion.com

Your survival guide for a weekend in Barcelona

Where to visit? Barcelona has some stunning architecture that is worth a look, mainly in the form of Gaudi’s inspiring and colourful creations that are scattered around the city. One of his most famous works is the Sagrada Familla Church, which Gaudi started in 1883 and became a lifelong obsession for him. Sadly, due to his untimely death, he was never able to complete the project. For those who like sport, a visit to the Nou Camp or the former Olympic site is a must. If shopping is more your thing, then pay a visit to The Ramblas, with the best shops the city has to offer.

Where to drink? Banker’s Bar at the Mandarin Oriental is situated in the heart of some of Gaudi’s most architectural showstoppers. It’s a contemporary hotel which previously housed a bank. Great location if you are looking for a chic and luxurious drinking place.

For something a bit more authentic try Boadas cocktail bar. Situated close to the Ramblas, this bar is one of the oldest in the capital. It’s small and cramped but it’s a favourite with tourists and locals alike.

Where to eat? The Ramblas area of the city has a host of restaurants and cafes. For some traditional tapas visit Taller de Tapas on Sant Josep Ond.

Venture to the outskirts of the city to the chic ABaC Hotel and you’ll find a two Michelin starred avante garde dining experience. This hotel was built around its restaurant and offers up delicious food and stunning architecture. A little further afield you’ll find one of Raymond Blanc’s favourite restaurants, Can Fabes, which serves up seasonal rustic Italian produce.

How it feels to…

F1 explained by the people in the thick of the action…

Ever wondered how it feels to be involved in an F1 pit stop? Facing an F1 car charging at you at 100 km/h. It’s something Chris Smith faces every other weekend when he operates the front jack during pit stops. And this year he’s busier than ever as the pit crew have clocked up an average of 5.5 stops per race. Here, in his own words, is how it feels to be at the centre of the action…

“You always feel a bit nervous before a pit stop, especially the first one of the day. When you see the car approaching, you think to yourself: ‘he’s never going to stop’, but the drivers usually hit their marks perfectly. Even so, I always stay light on my toes, just in case! As soon as the car arrives, I lift up the front end and my eyes are constantly going from right to left looking for two green gloves to go up. This means the gun men have finished fitting the wheels. When I see those hands, I drop the car and get out of the way as soon as possible.”

Pirelli Confident Ahead Of Spanish GP At Barcelona