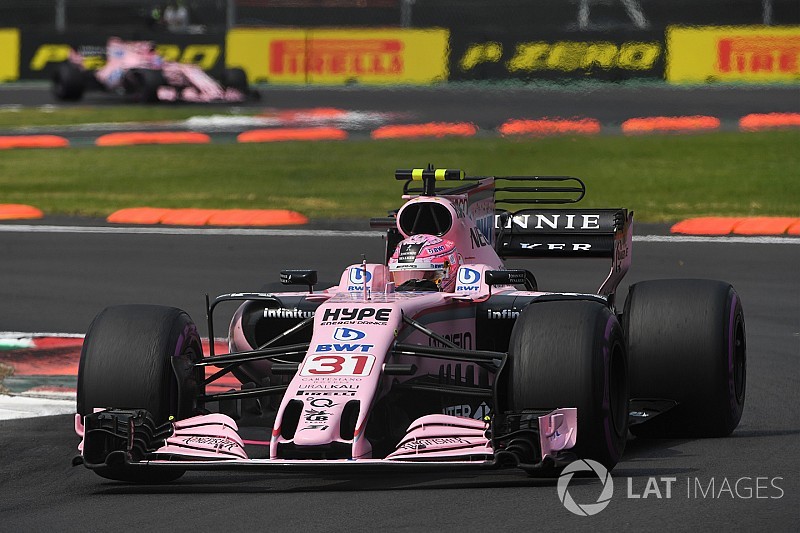 Force India deputy team principal Bob Fernley says his squad could have scored its first podium of the 2017 Formula 1 season in Mexico, had it not been for an ill-timed virtual safety car.

Esteban Ocon assumed third position on the opening lap of the race, with teammate Sergio Perez also gaining places to move up to fifth.

The Mexican, however, started coming under increasing pressure from Ferrari’s Kimi Raikkonen and was forced to make an early stop on lap 18. In doing so he set off a chain reaction, forcing Ocon to also pit two laps later.

But the strategy backfired when the VSC was deployed following Brendon Hartley’s retirement, essentially granting Raikkonen a free pit stop.

The Finn managed to leapfrog both the Force India drivers in the pits, with Ferrari teammate Sebastian Vettel also managing to overtake them after recovering from first-lap drama.

Ocon eventually wound up fifth, while Perez crossed the finishing line in seventh after falling behind Williams' Lance Stroll.

However, Fernley defended the team’s strategy, saying it had to do something different to chase a podium finish.

“We were going for a podium. Normally when we’re racing, we’re looking at not worrying about Ferrari, Red Bull and Mercedes because we can’t beat them,” Fernley told Motorsport.com.

“Here was an opportunity so we roll the dice, and in rolling the dice, it also comprises, when it goes wrong, the pace. It was worth doing. It was a good effort but in the end, we didn’t quite have the pace to hold back the Ferraris.

“In going for a podium, we pitted earlier to stop the undercuts. In the end, Raikkonen was that bit quicker. The [virtual] safety car threw everything out the window and allowed Vettel to come through."

Ocon could have been undercut by Raikkonen

While the decision to pit Perez was sensible, many were perplexed why Ocon was also brought in when he was so far up the road.

Force India COO Otmar Szafnauer revealed that his outfit was tricked by Ferrari into making a pitstop, with the Scuderia eventually deciding not to service Raikkonen’s car.

“Raikkonen was coming up behind us. His team came out of the pitlane with tyres ready to undercut us. And I think his instruction was to do the opposite of Ocon,” Szafnauer told Motorsport.com.

“So if you’ve got a naturally faster car, you can both undercut or overcut. And had we not did it Raikkonen would have pitted, come out in free air and then we pit one lap later cause he’s close enough to us and he gets us.

“We pit, he doesn’t pit and now it is us on fresh tyres and him on used tyres, which one’s faster? Does he get us or doesn’t he get us.

“As it turned out, what happened is that he stayed out so long that VSC happened and he gained about 12 seconds because when he pits under the VSC he comes out 10 seconds ahead.