Former drivers impressed by Raikkonen in 2012 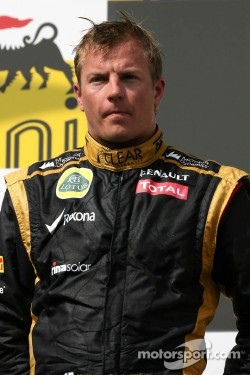 Aug.2 (GMM) Former F1 driver Karl Wendlinger has admitted he has been impressed with Kimi Raikkonen in 2012.

After sitting out two full Grand Prix seasons while he forayed in world rallying and Nascar, F1's 2007 title winner returned with Lotus this year and after the first half of the calendar is within reach of the top of the standings.

"He is at a very high level," Austrian Karl Wendlinger, who raced with Sauber in the mid-90s, said on Red Bull-owned Servus TV.

"After a two year break, to have a lot of podiums already is sensational. He is very fast in the races and again and again is going for the wins.

"I think everyone up to and including Raikkonen in fifth place can still fight for this championship," Wendlinger, also referring to Lewis Hamilton, the Red Bull drivers and title leader Fernando Alonso, added.

Wendlinger, now 41, admits Raikkonen is "quiet" and has not always had the best reputation in terms of how dedicated he is to his chosen sport.

But he insisted: "Kimi was not world champion for nothing.

"His lifestyle was maybe not the best, but whoever can fight in the temperatures we saw in Hungary until the last lap must be in good condition."

Martin Brundle, also a former Grand Prix driver and now a commentator for British television Sky, admitted he was impressed with Raikkonen's "face like a wet Monday morning" after missing out on the win in Hungary.

"It really impresses me that he takes that much pain on what by any standards is a very successful return," said the Briton.

Glock's nightmare form is back