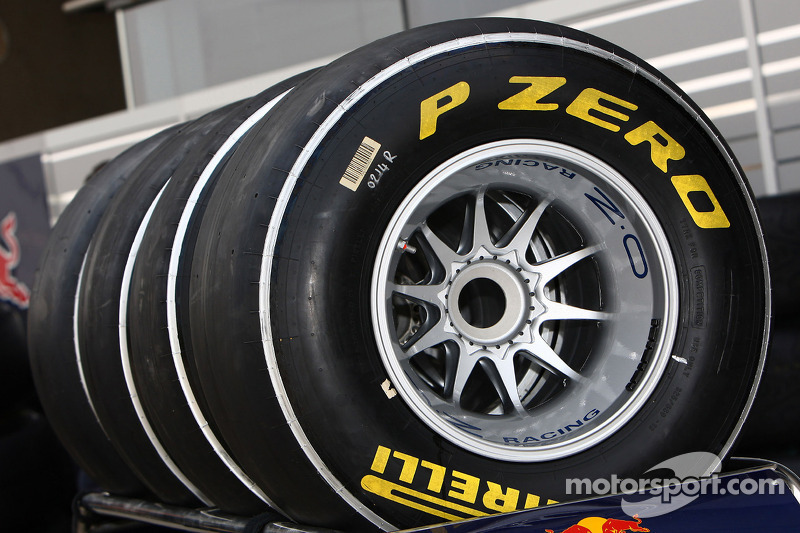 
Is Formula One tired of the Pirelli tyres

Just like last year, the Pirelli tyres are dominating Formula One, but now drivers start to wonder whether the rapid degradation is a bit more than they have bargained for. Several drivers have criticized the Italian tyre company for this year’s tyre compounds, and several teams have again huge problems getting the tyres to work on their 2012 contender.

Seven-times World Champion Michael Schumacher commented after the Bahrain Grand Prix, “I had to drive at a pace to manage the tyres to finish with tyres left over. We should question whether that should be the case. It's unsatisfying and not what a Formula 1 event should be." And he added, “If 80 or 90% complain, maybe Pirelli should think about it. I don't think it is right only one or two teams can handle it and the rest struggle so much.” 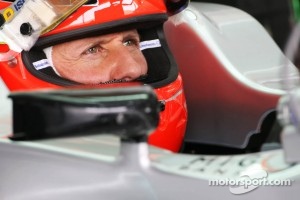 And Schumacher has a point, tyre degradation has never been so high, certainly in Bahrain, where most drivers had to take back the throttle to make sure they would make it to finish. “The main thing that I feel a little bit unpleased is I think everybody had to drive well below drivers’ and cars’ limit to maintain the tires,” Schumacher complained. What Schumacher is saying is that the tyres are too much a part of the equation, they should not play such a dominant role in a Grand Prix.

Pirelli was actually asked by the FIA in 2010 before they made their debut in 2011, to produce tyres that would improve the show, and Pirelli did that with tyres that would wear quickly, and spectators would therefore see more pit stops, which would lead to more action on track as drivers had to regain their position after a pit stop. The idea worked and Pirelli was praised by the complete Formula One fraternity, the media, and the fans as well. But now it seems Pirelli has taken it one step too far.

Schumacher isn’t the only driver to voice his concerns. McLaren’s Jenson Button also has his doubts. “Last year, we knew the tyres had high degradation but we understood them. This year, I don't really know what to make of the tyres,” but he said, “it's not an excuse because other people are doing a good job on them this weekend.” And McLaren Team Principal Martin Whitmarsh agreed, “He who understands the tyres first, will have a huge advantage in the world championship.”

Schumacher’s other argument that drivers cannot drive at the limit anymore also makes sense. Schumacher, Kimi Raikkonen and Fernando Alonso are drivers who always drive their car at the very limit, but they can’t do that anymore, driving three laps at the limit means the tyres are completely gone. Raikkonen proved it in China and Bahrain.

In China he was second with nine laps to go, but his tyres hit the cliff, the point where they start to lose grip, and four laps later he was in 14th position. On lap 43 he lapped the circuit in 1m41.794s, and on lap 49, after trying too hard, his lap time had dropped to 1m47.739s.

Lotus and Raikkonen did learn a lesson in China, in Bahrain Raikkonen was confronted with the same problem, when he had caught up with Sebastian Vettel who was leading the race, he had only one opportunity to overtake the German. He failed to do so and after that Raikkonen had to settle for second place as he knew another attempt might spell the end of the life of his Pirelli tyres. 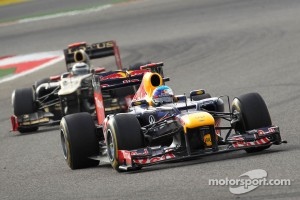 Of course everyone wanted to see a battle between the two, but the tyres didn’t allow it to happen. In this case Pirelli achieved the opposite, fans want more action on track, but spectators were deprived of what could have been another epic Formula One battle for victory. After all, the name of the game is “who gets to the finish line first” and not “who is world champion in preserving tyres”.

Pirelli Director of Motorsport Paul Hembery was disappointed by Schumacher’s comments, "I'm disappointed to hear those comments from someone of Michael's experience. Others were getting on with the job and getting their tyres to work. His comments during winter testing were that he was very happy with the tyres, and now he seems to have changed his tune.”

And Schumacher later replied, “If it was a one-off car issue, you could say it's up to us to deal with it. But basically it is everybody, with maybe one or two exceptions, and if it is 80% of the field that has this problem, then maybe the tyre supplier should think about that. I'm not happy about the situation, let's see what happens in future.”

Circuit of the Americas latest news

The Circuit of the Americas (COTA) is getting ready for the inaugural race on November 18, the work on the track goes according to plan, and it looks like it is finally going to happen, Formula One is on its way to Austin, Texas.

The circuit recently announced the installation of the Circuit Events Host Committee (CEHC), and according to the announcement ‘the members of the CEHC will serve as great advisors and ambassadors, and will keep us connected with the local community’.

“Host committees help large-scale events, such as the Super Bowl and the Olympics, maximize their positive impact for the local community,” explained Geoff Moore, chief marketing and revenue officer for Circuit of The Americas. “The members of the CEHC will serve as great advisors and ambassadors, and will keep us connected with the local community.” 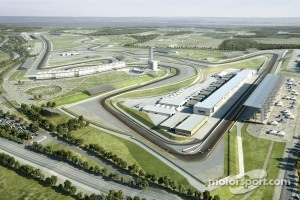 Artist's rendering of the Circuit of the Americas

According to the COTA members of the CECH include ‘leaders in business, government, nonprofit organizations, academia and the public sector’. The statement further read, “One important task of the committee is the creation of promotional events leading up to race week. These events will showcase some of the key elements and attractions associated and aligned with Formula 1, such as music, fashion, technology and celebrity involvement.”

Bob Lander, president and CEO of the Austin Convention and Visitors Bureau and member of the CEHC said, “With more than 100,000 fans and hundreds of broadcasters, journalists and photographers from around the world traveling to Austin in November, preparation is key.”

It is expected the Formula One Grand Prix will have significant impact on the local economy, and Casandra Matej, executive director of the San Antonio Convention and Visitors Bureau and member of the CEHC said, “With an influx of visitors to the area, we expect hotels in Austin to fill quickly, thus bringing many fans to San Antonio and other cities in close proximity to Austin. We are dedicated to supporting this world-class, memorable experience for these visitors, one that will make them want to come back year after year.”

Also joining the COTA is Italian tyre supplier Pirelli, together they will host the nationwide Formula One Show Car Tour, a display that will allow the public viewing of a Lotus Formula One show car, and also includes a driving simulator experience for the fans. The display can be seen in Austin but also in Denver, Chicago, Phoenix, Houston, Dallas, Cleveland and South Florida.

Both the COTA and Pirelli will also host the Formula One Experience, which will allow fans to ride alongside a Formula One driver in a special prepared 3-seater Formula One car, only four of these cars exist and two of them will be in Austin during the Grand Prix weekend. In this 3-seater fans can experience what it is like to be a Formula One driver, drivers will be Derek Hill, F3000 driver and son of 1961 Formula One Champion Phil Hill, former Indy Car driver Eric Bachelart; Red Bull Formula One reserve driver Jaime Alguersuari; and former Formula One drivers Paul Belmondo, Eric Van De Poele, and Tiago Monteiro.

FOM CEO Bernie Ecclestone has announced he will marry his now fiancée Fabiana Flosi. “We are officially engaged -- and it is not going to be a long engagement either,” the 81-year old Formula One boss said. Flosi, a Brazilian and 46 years his junior as she is 35 (there seems to be some confusion about her age so it could be a year less or more), has been seeing the billionaire after he officially divorced his wife Slavica in March 2009, to whom he was married for 24 years.

Together they have two daughters, Tamara (27) and Petra (23). His divorce with Slavica Radic as her maiden name is, a former Armani model born in Rijeka in Croatia, was the most expensive in British history, it is rumored the divorce did cost Ecclestone about 1 billion English pounds. 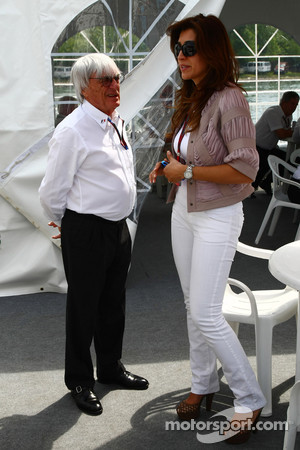 About Ms Flosi Ecclestone said, “We are so happy and it’s just a case of when we get married, not if, though we haven’t fixed a time or place yet. We have been together for two years and what makes it work is that Fabiana has a really good sense of humour – and when you live with me you need to have a sense of humour.”

Ms Flosi, a lawyer, sports marketing agent and model, is also Formula One’s vice-president of marketing in Brazil, and the two met in Sao Paulo during the 2009 Brazilian Grand Prix. Although Ecclestone after his divorce said he would ‘remain single for the rest of his life’, it didn’t take the beautiful Ms Flosi long to get the Formula One boss on his knees, well not literally, and ask her to marry him. It will be Ecclestone’s third marriage.

The couple has been living together for a while now, they unwillingly made the headlines when they were mugged outside the headquarters of Ecclestone’s business empire Formula One Holdings in Knightsbridge in London, where the couple has an apartment overlooking Hyde Park. Ecclestone was taken to hospital after he had been beaten up by his attackers, and according to reports £200,000 worth of jewels were stolen from the couple. His attackers have never been found.

Ecclestone is ranked in Forbes World's Billionaires List of 2011 as fourth richest person in the UK, his fortune being worth some $4.2billion.