BMW WilliamsF1 Team Principal, Frank Williams, talks about his memories of three-time World Champion, Ayrton Senna. Q: Frank, you offered Ayrton his first taste of a Formula One car very early on in his career in 1983. What made you offer him that ...

Q: Frank, you offered Ayrton his first taste of a Formula One car very early on in his career in 1983. What made you offer him that test drive, and how long prior to 1983 did he come to your attention? 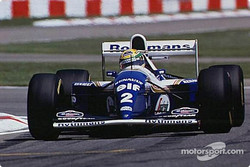 Frank Williams: Well it's difficult for someone in Formula One to follow all the Junior Championships in England, let alone on the continent as well. There's too much to take in, so you tend to look out for who's persistently successful in the results. Ayrton's background and his results list was impressive.

I met him at a Formula Three race and we talked a little bit. What impressed people about him was that he was just so determined to make it. And he was certainly clever, he spoke good English, he understood his car, and wanted to understand it better and better. In his case, he just pestered me and he pestered Patrick to give him an opportunity to try the car.

At that time, this was mid eighty-three, we were hesitant because we already had drivers signed up, for eighty-four as well. We clearly couldn't test him, or give him a race seat, so we were reluctant to give him an opportunity. At the end of the day, however, his persistence paid off and he demonstrated in just twenty-two laps at Donington, his first acquaintance with any Grand Prix car, that he had what it takes. Certainly a very remarkable performance.

Q: Can you put your finger on precisely what impressed you about that performance?

FW: Well our regular test driver at the time was Jonathan Palmer, who was known to be a pretty quick character, who had been to Donington around the same time and set a time which Ayrton managed to equal in eleven laps, I think it was, and bettered by about a second within twenty-two laps. Then he came into the pits and said "I think there's something going to go wrong with this engine, I'd better stop now" and then he went home. There was nothing wrong with the engine. Most of these guys want to hang on to their equipment as long as they possibly can in case they're never allowed back in it again. I think Ayrton was well aware of his destiny, and that confidence brushes off.

Q: Once he'd graduated to Formula One, what then made him particularly special as a driver?

FW: I didn't realise it at the time, but when he began to drive for us it was regrettably for a very limited period of time. But in the testing and in the driving he clearly applied his mind all the time. I also learnt to my cost in several negotiations that his business strategy was rather like that of a chess master. He had a number of moves and counter moves well planned before the engagement. He was always ready and they were always very impressive performances.

Q: How about his qualifying? Why do you think he was such a sensational qualifier?

FW: Well, you could always see it in his eyes, when he left the pitlane, they were eyes of total concentration. He showed no mercy and it was for good reason that the TV cameras would be glued to his car in these sessions. But concentration made his performances over a single lap the most compelling thing to witness on a race track.

Q: Did any of his qualities have a relevance compared to today's drivers?

FW: Absolutely, I think in many ways he defined today's Formula One. He was the first person to realise the importance of absolute superiority over his rivals in every aspect of the job, whether physically, or in terms of complete application and keeping an intensity of mental focus that moved seamlessly from a race to the next test and wherever next he could carve an advantage- he was always thinking. That awareness of absolute superiority was ahead of its time, I would suggest, and he was ruthless and relentless in the pursuit of that advantage. He introduced a whole new mindset to the sport in that regard, something you see Michael Schumacher using to great effect today.

Q: Senna showed his ruthlessness in his long standing rivalry with Prost. Do you think incidents like Japan 1989 clouded his reputation and threw the sport into disrepute at this time?

FW: The Senna/Prost rivalry was, I strongly believe, good for Formula One. It made the sport more newsworthy and generated welcome attention for Formula One which assisted with its business profile. The incident in Japan was bad for the team, bad for the drivers (certainly for Ayrton), but it was a sensational news story and the degree to which those two guys locked horns was absolutely compelling.

And yes, while a purist might pick through the record book and take issue with the manner of one or other of Ayrton's results, no one would ever question his singular commitment to win, and surely that is the very essence of a great sportsman? What I would say is that he was never dangerous in my view - a risk taker, certainly, but I feel he was taking racing opportunities that other competitors were not prepared to countenance.

Q: How would you characterise the difference between Ayrton and his great rival?

FW: I may be dubbed a heretic, but I've always suspected that Alain actually had a greater skill and I say that whilst remembering that Ayrton certainly pushed himself to the limit more than Alain did - Alain never explored the edge as consistently or successfully as Ayrton. Alain remained very calculated in his risk taking whereas Ayrton was more flamboyant in his style and certainly examined, and then drove, right on the limit. He took no prisoners, and was all drive and courage when he was in the car. But as many differences as they had, they also shared a great many similarities, and both were very cerebral drivers, great thinkers, but the manifestation of that mental control was somewhat different.

Q: Would you say he was one of the best?

FW: He's one of the best drivers ever, certainly, but it's difficult to say who is the best because there are different requirements in different eras. He certainly marked the new breed of highly focused, highly developed drivers that we know today, he created a new standard.

Q: What was Ayrton like away from the track, as a character outside of motor racing?

FW: Ayrton was confident, aware of his name, fame and success and was masterful at using his remarkable profile to a clear end, all driven by his habitual forward planning. His success on the track translated to business success and that is far from being common for sportsmen. Brazil was literally at his feet, he could call his price and he used his stature and reputation very successfully in the businesses he set up. He certainly had some critical mass, and who knows what he might have moved onto. Maybe politics could have been his end game, but I have to say, we never discussed such issues. He was a remarkable driver and a remarkable person.