The full extent of the void left by Lauda

Niki Lauda's death was always going to hit Mercedes hard, but it required an emotional address from Toto Wolff to lay bare the grief the team is experiencing after losing its non-executive chairman

The most poignant minutes of the Monaco Grand Prix week begin with an act that would be comedic in any other context. Shuffling down the side of a packed Mercedes hospitality room, team principal Toto Wolff hoists himself atop the counter, scooches himself round, and clambers down the other side.

Then he takes his seat, gets as comfortable as one can be in this environment, and faces a throng of broadcast and written media to talk about the death of his closest friend in Formula 1.

Facing almost 20 questions and speaking for nearly half an hour on Thursday morning, Wolff flitted between sombre thought, a furrowed brow, wry smiles and head-shaking laughs as he recounted his memories of Niki Lauda.

White Mercedes shirt adorned with a black armband, he starts with a look around the room and bids the masses "good morning".

What follows has the power of a presidential address with the sincerity and emotion of a public eulogy, and feels anything but scripted. Wolff pays a wholesome tribute, while still grappling with the reality that Mercedes' colourful, popular and (sometimes) controversial non-executive chairman is not by his side in Monaco - and never will be again

"As you can imagine, this is very difficult, very difficult for the team, for all of us, and most important very difficult as a friend," Wolff began. "It's not an easy situation to try to go back to racing, especially not in Monaco, with so much media attention, in front of all of you, trying to keep it together emotionally in speaking about a friend." 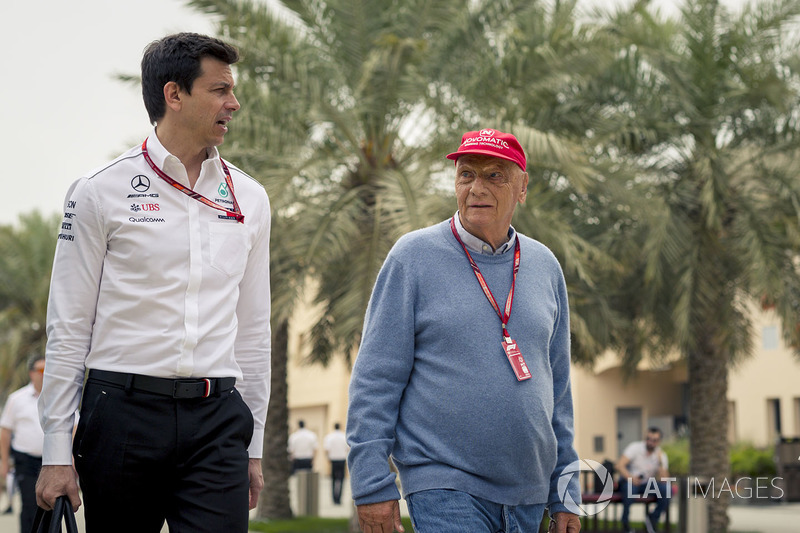 Wolff went on to say the last 48 hours had left him feeling like a "zombie". He talked about the hurt of "the world and the F1 community" losing "the biggest icon", but pointed out "that it is a totally different and much more difficult situation to have lost a friend".

Lauda joined Mercedes in 2012, with Wolff moving across from Williams the following year. After an early dynamic that proved challenging at times, the two gelled professionally - helped by a personal connection that stretches back to Wolff's first wife being Lauda's cousin - in a way that Wolff describes as developing their relationship "from respect and understanding to friendship".

"We have been missing Niki in every single race at the end of last season, when he fell ill, and at the beginning of this season," said Wolff. "But again, being faced with him not being any more among us, being faced with me personally not texting him any more, or speaking to him after the weekend, receiving his feedback, losing him as a sparring partner - [that] is the most difficult.

"We're trying to address all of you and your questions with this one press conference, and hopefully then you will accept that we can carry on with our racing during the weekend.

"There is nothing else that Niki wanted us to do [more], but also respect the emotions within this team, that it is impossible for us to comment and be reminded about the sad situation."

So, to prevent any knives being twisted, or grief being dragged out any longer than necessary in such a competitive environment, Wolff - who does not normally speak before Saturday - sat down an hour before first practice to field question after question. First, from German broadcasters. Then in English. Then English-speaking journalists, and a bit of German.

When did you find out? When did you last speak with him? What is your favourite memory? How is Lewis Hamilton's frame of mind? 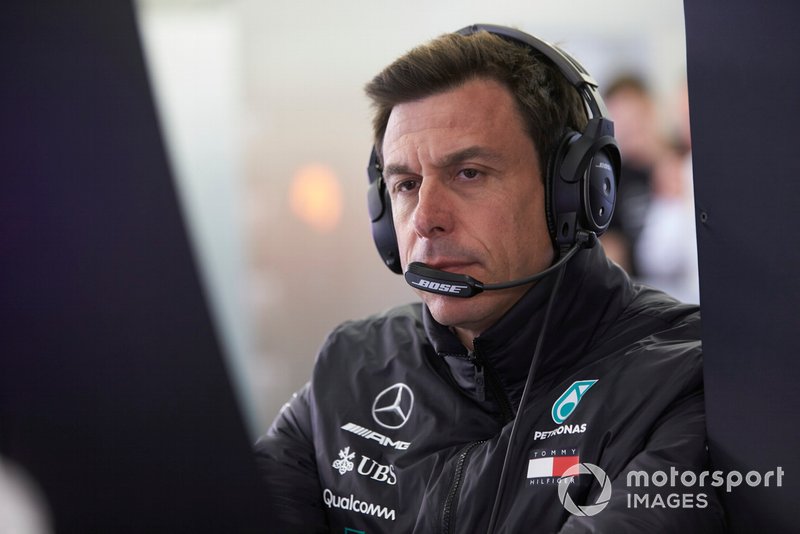 To his considerable credit, Wolff took every question with good grace and answered with considered thought. There were pauses as he considered supplementary thoughts mid-comment and at one point (probably unsurprisingly) an answer seemed to be caught in his throat. His eye contact was impeccable, his tone lower than usual, and his answers delivered at a slower pace.

The personal reflections ranged from the funny (Lauda telling Wolff his GT lap record on the Nordschleife attempt is "the dumbest thing I've ever heard" and "nobody cares anyway") to the "human" (when Lauda, during a title-winning grand prix for Lewis Hamilton, "out of nowhere folded his hands, looked up to the sky and said, 'Dear God, please this one time, help me!'").

Wolff is not the first to have spoken tender words in Lauda's memory and the paddock has not been short of amusing anecdotes to share. Sebastian Vettel spoke of how much he enjoyed Lauda's "very straight" humour, that the Lauda often seen on TV was exactly the Lauda that existed in private - and that he was so honest people did not think he was telling the truth.

"Sometimes you couldn't tell if it was just a joke or just a statement," said Vettel. "There's a lot of people that are not the way you see them on television. They are growing in numbers, quickly! But Niki wasn't one of them.

"He was who he was. He never pretended to be anything or anybody else. He was very outspoken, a true character, a true racer, passionate for the sport - a lot of things people respected."

Vettel spoke incredibly kindly of Lauda, stressing how much of a privilege it was to be a student of F1 history and hear Lauda's account of life at Ferrari, dealing with Enzo, and driving the cars of the '70s and '80s. He even changed his helmet to Lauda's colours in tribute, saying it was a way Lauda could "enjoy some last laps around Monaco". 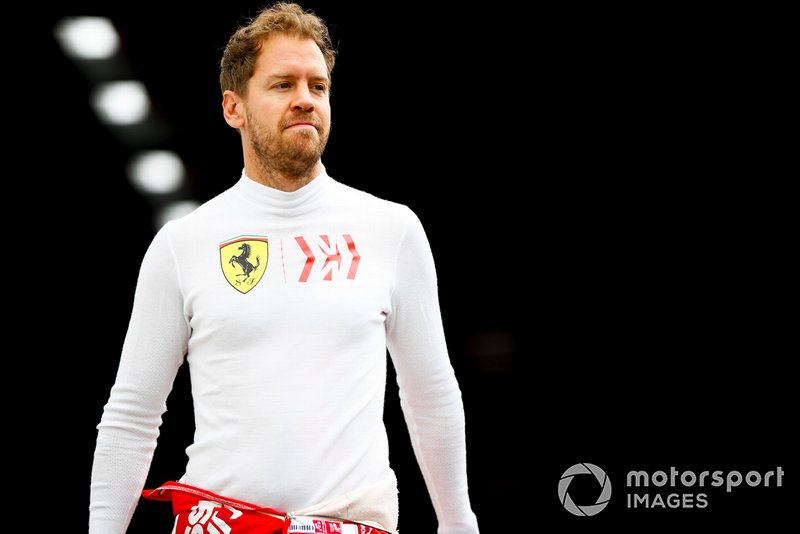 More importantly, though, Vettel spoke in such a way that his words act as a broad summary of almost every assessment of Lauda's character it has been a pleasure to hear this week: "You don't come across people like him very often, not just in F1 but in general. He was a unique person."

Many others have offered compassion and empathy, in written and spoken form. Helmut Marko gave Austrian media a touching interview on Tuesday, multiple drivers and team bosses have given their thoughts on the impact Lauda made on-track, off it, and away from F1 entirely - such as his dealings with the Boeing company after the horrific Lauda Air Flight 004 crash in Thailand in 1991.

Lauda's passing has triggered emotion and empathy in the Monaco paddock in a way seldom seen without the grim spectre of death. Agonisingly for those of an older generation, this is an all too familiar feeling this year. It's distressingly similar to the build-up to the Australian Grand Prix, although Charlie Whiting's death overnight in Melbourne was a much greater shock. But the knowledge that Lauda had been unwell for some time, and was nearing the end, hardly took the sting away from the end result.

"We knew that it was not going well the last days," Wolff said. "I got a text message from his wife on the Monday evening. I was in Paris. Since then, I'm not myself. It feels surreal to be in an F1 paddock with Niki not alive anymore.

"Although we could see it coming, when it happens it's so raw in front of you that you're not going to see him anymore."

That sentiment shines a harsh light on the regrettable events from the previous day, when Lewis Hamilton was booed in the Monaco media centre when it was announced he had been given permission to miss the press conference on compassionate grounds. No doubt that was fuelled in some way by the fact his Mercedes teammate Valtteri Bottas felt able to appear. But much as Bottas spoke eloquently and honestly, and paid his own beautiful tribute to his departed team boss, Lauda and Hamilton had a deeper, unique relationship. 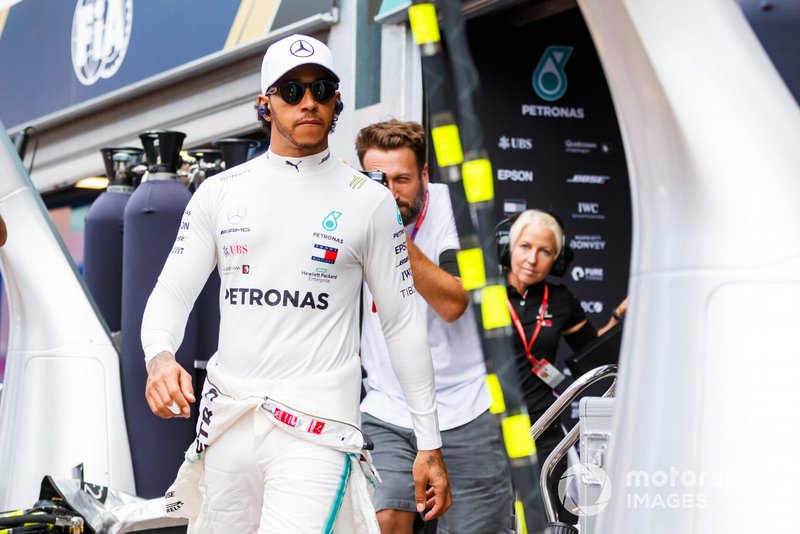 Out of respect for the situation, Hamilton's treatment in the aftermath of Wednesday's no-show (in media terms, anyway) was not broached in direct terms when Wolff spoke. But, whether by accident or design, Wolff touched on it nonetheless.

"Maybe we're in a similar frame of mind," said Wolff. "We've lost a friend and Bradley [Lord, Mercedes communications chief] and the team were so kind to let us off the hook yesterday. The FIA supported it, to not have Lewis in the press conference because of that fact. It's very difficult in our environment to comment 48 hours after you've lost a dear friend.

"Besides the friendship that we both had to Niki, there was an additional bond that Lewis had with Niki and that was the one of an F1 world champion. And the over-arching feeling is just sadness within the team, and that is valid for Lewis and others that were friends to him.

"We both got the message at the same time and spoke to each other right afterwards, and these last days. And everyone will have his own personal way of mourning and feeling the sadness, but I think to conclude, Niki would want us to concentrate on the race weekend and deliver on Saturday and deliver on Sunday."

In the hours after Wolff's address, Mercedes drivers Hamilton and Bottas made the perfect start to achieving that by topping Thursday practice. Enduring Mercedes domination may not be the most appealing prospect on most weekends, but circumstances make it a much less offensive proposition in Monaco.

Wolff says Lauda's death has cast a "huge black cloud". Perhaps the Silver Arrows can give it a silver lining. 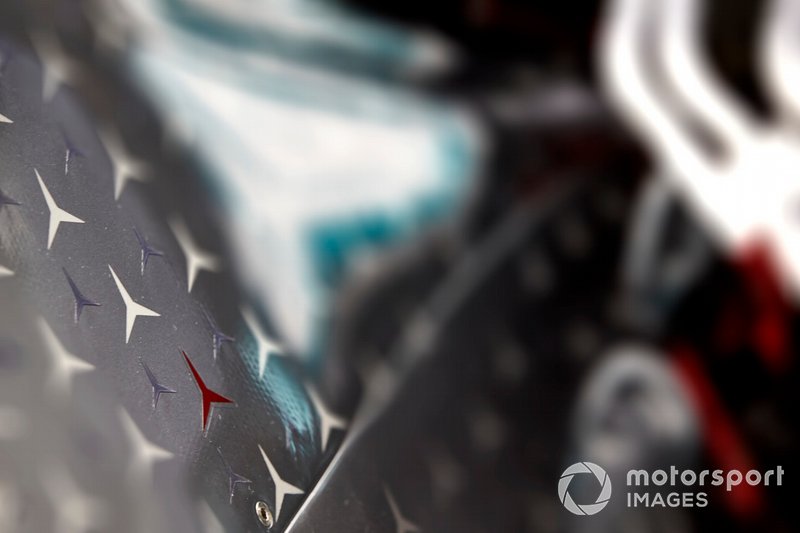 The engine cover on the car of Lewis Hamilton, Mercedes AMG F1 W10