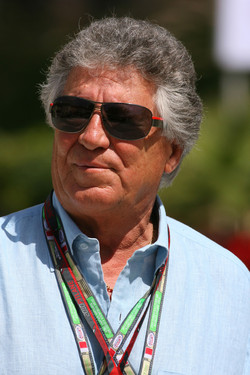 Two weeks ago, I spent an enticing forty-five minutes chatting to racing legend Mario Andretti. It was his 71st birthday and despite a heavy schedule - culminating with a private party at home with the family, the Italian-American was keen to talk motor racing.

In a career spanning five decades, he has seen it all, done it all and practically won it all. A four-time USAC and CART IndyCar champion with an abundance of victories in Sprint Cars and Sportscars, he remains, to date, the only driver ever to win the Daytona 500 (1967), Indianapolis 500 (1969), and the Formula One World Championship (1978).

His final year behind the wheel saw him compete in the 1994 IndyCar World Series for the Newman Haas team - part owned by the movie star Paul Newman. It was, not to put too fine a point on it, a disappointing swansong for the veteran and his relationship within the team was affected via the arrival of reigning Formula 1 world champion Nigel Mansell to the series the previous year.

I don't think anyone needs to doubt the commitment my family has for this sport.

The opportunity to race in America was only afforded Mansell after Andretti's son - 1991 CART champion Michael Andretti, resigned his race-winning seat at Newman Haas and decided to race in Formula 1 with the McLaren team.

Having enjoyed a record-breaking year en route to the title in '91, his stock value was high and with McLaren's star driver - three-time world champion Ayrton Senna, undecided about whether to race or not in 1993, team owner Ron Dennis needed a top line driver. With team sponsor Marlboro eager for a 'top name' to be announced, Dennis elected to sign Andretti on a multi-year, multi-million dollar deal. As a back up plan, a young Mika Hakkinen was hired from Lotus and was guaranteed a drive on the understanding that Senna would ultimately choose to take his leave.

Thus, the scene was set for North America's man of the moment to take the grand prix world by storm, but, as Mario made clear to me, there were numerous contributing factors behind Andretti's subsequently disappointing season - the main one being Dennis himself.

"There were many issues during that year that caused the whole thing to turn out so bad," Andretti confirms. "Ron hired Mika when it seemed Ayrton was going to leave and as Mika had been signed from Lotus, he was suddenly their golden boy; the future star.

"He was promised a drive at some point during the 1993 season so he was getting all the testing in preparation. Michael was very much put off because he was the race driver and needed the testing more than anyone because the governing body - FIA, had introduced a new rule that limited the number of laps you could run in practice and qualifying and so he needed all the seat time he could get and they gave it to Mika."

The first few races of the year were disastrous in terms of points for Andretti as he suffered mechanical issues with his MP4-8 car that was still in the early stages of development. Colliding with Gerhard Berger's Ferrari and Karl Wedlinger's Sauber in the second and third races of the year respectively didn't help either. Senna - who had elected to drive for the team on a lucrative race-by-race basis, won those races with a combination of stealth and genius. Collecting a second place at the first race of the season in South Africa, he sat atop the points table while his American team mate was the furthest point south, empty handed with no points and a mere three racing laps under his belt.

With Senna's decision to race, Hakkinen was forced to sit out the early part of the year and now, McLaren had a problem on its hands. The American had negotiated a very profitable deal for himself yet now Senna was demanding a cool $1m per race, and the team, quite simply, couldn't afford both men. 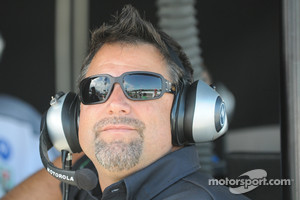 "The problem for Michael was that he came on with a strong contract with McLaren both driving wise and financially," Mario insists. "He was in a strong bargaining position when he negotiated his deal and there were a few variables that were unknown about what would happen with the team. They were trying to get the dominant Renault engines, there were question marks over Senna and whether Ayrton would be staying on or retiring. No matter what was said, Ron couldn't support having both of them and so when he got Hakkinen from Lotus for barely nothing - and promised him races, the writing was pretty much on the wall for Michael."

The press began making much of Andretti's decision to commute across the Atlantic from his home in Pennsylvania to all testing and races via the supersonic passenger plane Concorde. It was, they reported, a major reason behind his poor season and showed a lack of dedication.

"Firstly, I don't think anyone needs to doubt the commitment my family has for this sport," his father contends. "That whole thing about Michael traveling across the Atlantic on Concorde was a huge misnomer. He was so unfairly characterised. Michael had it all set to buy a home over there and despite all that was written about it, it was not an issue but for some reason it became one with the press over there but it was totally misinformed.

"It's always a personal thing you know. I always have travelled well and Michael not so well so he would have moved over there but there were a lot of factors we're talking about here."

At the time, Andretti had a wife; two young children to support and had enjoyed life developing his career in America. Despite his insistence that he was only three hours away across the Atlantic and fully focused on his Formula 1 career, it didn't sit well with the European press who began questioning his standing within the team and whether Hakkinen should be brought in to replace him.

"It was totally misconstrued in the press," Mario insists. "He showed he could drive - he just didn't have luck on his side in the early races. I remember the team stayed on at the Magny Cours circuit after the French Grand Prix in July. Well, the next two days after the race - Monday and Tuesday, both Ayrton and Michael tested with identical fuel loads and tyres and he set the same lap time as Ayrton. Both would have been right up the front of the grid with those laps and it just went to show that with time and patience, he would have been there, no question."

At the mid way part of the season, Michael had but three points on the board while Senna was gallantly trying to hang on to the coattails of his arch-rival Alain Prost who was beginning to run away with the title for Williams Renault.

By the time the grand prix circus reached Monza in September, murmurings regarding Andretti's standing within the team were reaching fever pitch and McLaren became increasingly reluctant to answer direct questions relating to its long-term commitment to the American. In point of fact, Dennis had already told Andretti that Monza would be his last for the team. In the race itself, he recorded his only podium finish of the year after taking third place behind Damon Hill's Williams and the Ferrari of Jean Alesi.

The next race was the Portuguese Grand Prix and with it came the official announcement that Senna's team-mate for the event and indeed for the remaining races in Japan and Australia would be Hakkinen. 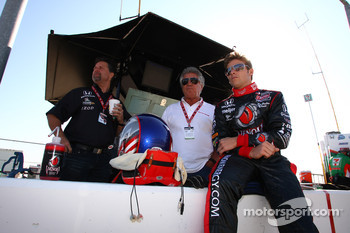 Andretti meanwhile, was back in the States, released from his contract but armed with a newly acquired, one-year deal to return to Indycars with Chip Ganassi's team.

Had he been shoehorned out by McLaren and Ron Dennis?

"Absolutely he was," Mario adamantly confirms. "Michael was the object of least resistance to get shoved out but he was told early on in the season that he may not get his contract renewed because they want to have Mika in the car to finish the year from Monza onwards. I personally begged Ron to keep Michael in the car at least for Monza and he did a really good podium there and he showed how good a racer he was by passing lots of drivers."

Upon reflection, Michael Andretti's foray into Formula 1 could and perhaps should, have heralded a golden moment in the sports history. The signs were there, the talent was there, yet ultimately, it proved that no matter who you are, or indeed, who your father is, if the results aren't forthcoming, you will be disposed of.

In the Formula 1 paddock, patience is not something available by the acre.

"Of course, Michael bears some of the responsibility," Mario concludes. "But if he had insisted he stayed when Ron told him he may not have his contract renewed or his option, it would have been a totally different story to tell about his F1 career. If he had stayed beyond 1993, he would have enjoyed a good time in F1 because to me, he sure as hell was championship-winning material.

"It should have been sweet; instead it turned out to be very sour."