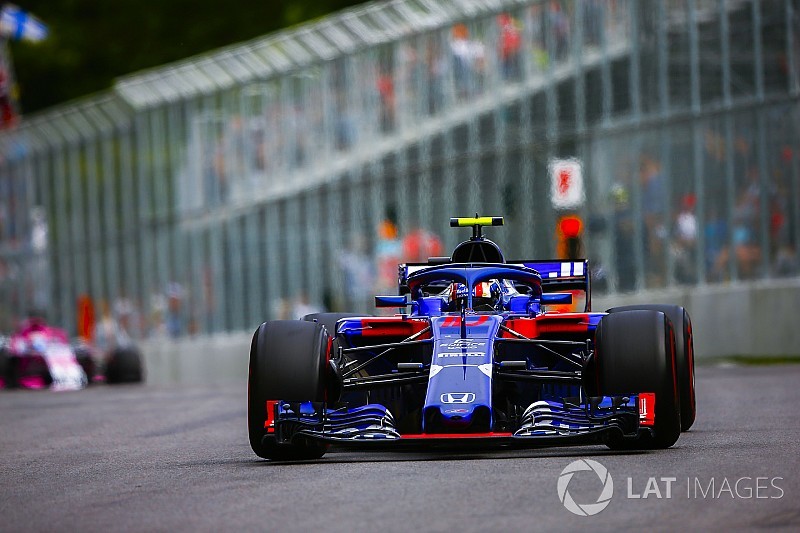 Honda brought an upgraded engine to Montreal, with Gasly using it throughout practice but having to then revert to an older specification.

After a poor qualifying, a fresh new-spec power unit was fitted on Gasly's STR13, demoting him 16th to 19th on the grid, but allowing him to recover to 11th place in the race.

Asked by Motorsport.com whether he could've finished as high by keeping the old power unit and avoiding a penalty, Gasly said: “No. We would've finished, looking at the race, behind [Sergio] Perez I think, so would've been 14th.

“It was the right choice [to change it], because with the other one [it] would've been not possible to come back even from P16.

“In the end it was the right decision, even if we started a bit further.”

Gasly was 15 th by the end of the opening lap, and was among the few drivers to gain positions in wheel-to-wheel combat during the race, picking off the Williams of Sergey Sirotkin, the Force India of Sergio Perez and the Haas of Kevin Magnussen in the opening stint.

“I overtook a Haas, I overtook a Force India on the straight, which is the first time this year,” he said. “For me [the new engine] is looking good. Promising.

He added that the new Honda unit was an improvement in every aspect: “Everything. Just more performance in general.

“In terms of battery as well, in terms of energy management is better. It's a really good step, yeah.

“They [Honda] told us 'okay we are working for an upgrade, which will be a decent upgrade, something that will make a real difference'.

“And clearly on the data we can see that it's a really good step forward.”

After making his only stop, the Frenchman put pressure on Sauber's Charles Leclerc for what would be the final points-paying position – but could not get past, with Sauber “really fast on the straight” and Gasly himself “damaging the tyre quite a lot” trying to keep up.

Asked by Motorsport.com what was possible without Saturday's problem that compromised his qualifying and then led to the grid penalty, he said: “I think definitely top 10, after it's difficult to know exactly where would've been.

“We didn't finish so far - I think [Esteban] Ocon was 10 seconds in front of Charles, probably would've been fighting with him. At least a point, a point or two would've been possible.”