Gasly thought he would hit wall in Perez fight at Spa 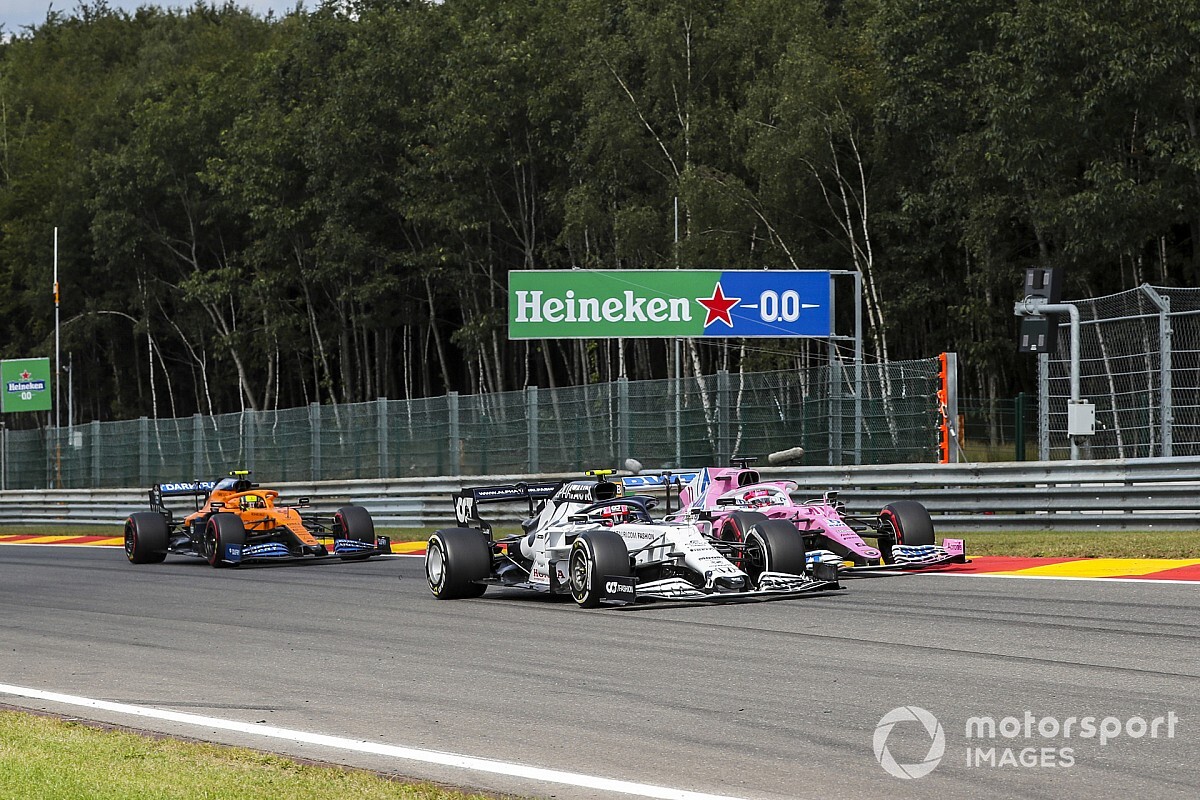 AlphaTauri F1 driver Pierre Gasly admits he thought "we were in the wall" when he pulled off a spectacular pass of Sergio Perez in the Belgian GP.

Gasly tried to pass the Mexican on the run down the hill from La Source to Eau Rouge, and just managed to squeeze through on the right as the gap between the Racing Point and the barrier closed.

The move was one of several that Gasly made during a charging race to eighth place that also won him the Driver of the Day vote.

He was the only driver to start on the hard tyres, and along with Perez was one of only two who opted to stay out when everyone else pitted under the safety car for the Antonio Giovinazzi/George Russell accident.

After the race, Gasly recalled the moment with Perez when shown a video by Sky F1's Anthony Davidson.

"Honestly I thought we were in the wall," he said. "I'm not kidding, I was inside, I was like I can't move more than that. And at that point we're probably going 280 or 300km/h.

"Sergio really squeezed me, which made me even more like I'm not gonna lift, I'm gonna make this work. And it was tight.

"Sergio is a hard racer, I knew it but there for sure. My heartbeat went slightly high when he started to squeeze me, but I was committed and I was like, there is no way I'm gonna lift, I'm gonna make this move work, and it was a great one."

"And that was borderline, but in the end was there was the space for one car."

Gasly also pulled off a pass on Ferrari's Sebastian Vettel, who locked up trying to stay ahead.

"I think they tried a lot of things this weekend with wings, a low one, high one, but I mean, it's even painful to see them that slow, especially when you see what they achieved last year.

"There's clearly a massive deficit, and they can't really fight. I mean, I'm happy to finish ahead of them, that's for sure. But they are having a tough time."

Gasly admitted it wasn't easy on the hard tyres in the opening laps.

"I must say it was a bit difficult initially compared to the other guys with the option [medium], so I tried to keep it clean, stay close to the guys ahead. I was happy to make these two positions on lap one, because we didn't expect that.

"We expected to struggle a bit like the first three laps, and it was the opposite. I felt great. I had quite a lot of pace compared to the other guys and then I straight away went for some moves."

Hamilton was "nervous" about repeat of tyre failure