Gasly: Start tyre choice kept me out of Spa pile-up

Pierre Gasly says the decision to start the Belgian Grand Prix on the supersoft tyre kept him out of the opening-lap pile-up triggered by Nico Hulkenberg.

Gasly, who qualified 11th but lined up a place higher on the grid thanks to Valtteri Bottas' penalty, was the only driver among those eliminated in Q1 or Q2 to select the supersoft for the start.

The Toro Rosso driver managed a solid getaway and challenged Red Bull's Daniel Ricciardo down the inside of La Source for ninth.

This kept him out of harm's way as Hulkenberg slammed into Fernando Alonso to his outside, the Spaniard's McLaren bouncing over Sauber's Charles Leclerc and catching Ricciardo's rear wing, with the Aussie later riding up over Ferrari's Kimi Raikkonen on the exit.

Gasly wound end up running to lap 25 of 44 on the supersofts, and ultimately finished the race in ninth.

Asked about the decision to start on the softest compound, he said: “[It gives you a] better start, and looking at Friday's pace we knew that our tyre life was really good compared to the others. We were not really scared that we could make the one-stop work with the supersoft and the soft.

“In the end I managed to be alongside Daniel and Kimi in Turn 1 thanks to that, probably with the soft I would've been taken away in the first corner by Nico and all the mess behind me.

“So [it] was a good choice. Clearly the best we could do today.

“Once again in these last few weeks I've been in the right place at the right time at the start – pretty lucky to not be involved in that crash and have a pretty nice race.” 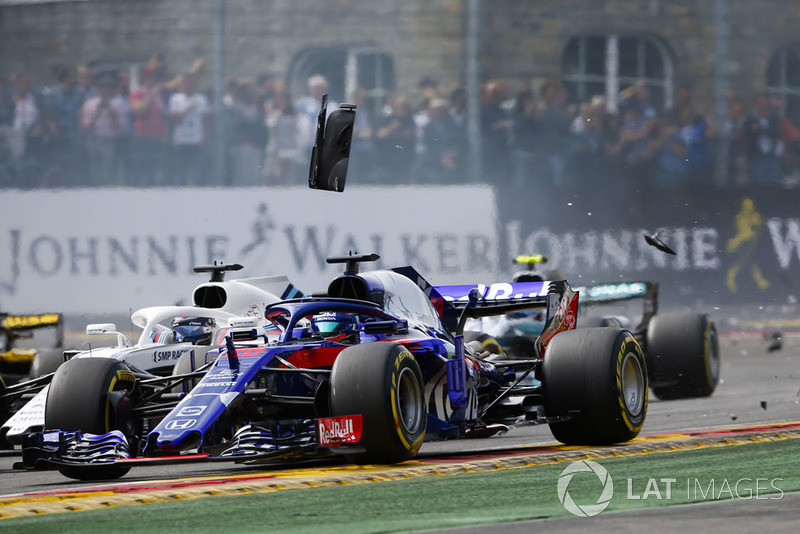 Toro Rosso teammate Brendon Hartley said his race was ruined as he got boxed in behind Ricciardo's damaged Red Bull.

“He lost the rear wing and I got stuck behind and both Williams and the Sauber ended up passing me before Eau Rouge. I lost out in the mix.

“So my race was already not looking good at the point.”

Hartley's first stint was the longest of anyone in the race, at 31 laps, and the New Zealander played a part in securing Gasly's ninth place before pitting – as he held up the chasing Sauber of Marcus Ericsson after letting the Frenchman, who had already stopped, through.

“Honestly it made perfect sense,” Hartley added. “Obviously I was going to let the other guy by, that's out of the question.

“And then I did my best to hold up Ericsson. I understood it was best for the team that I fight him.

“My race was lost at the first corner when I lost these three places when I was behind Daniel.”