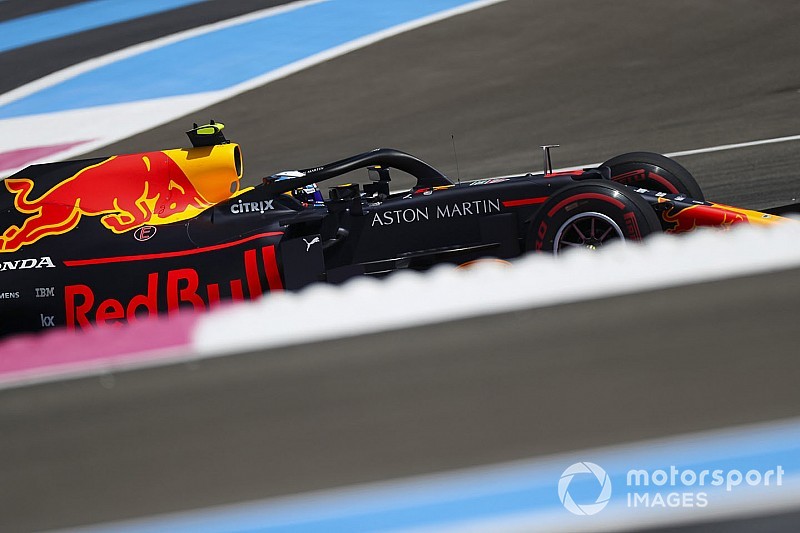 Red Bull Racing's Pierre Gasly says he went the wrong way on set-up for qualifying for the French Grand Prix.

Gasly added downforce after final practice, but in Q1 he found he had lost performance.

While most of the top contenders went for medium tyres in Q2 in order to avoid having to use the fragile softs for the start, Gasly opted to stick with them to help his passage into Q3.

He made it through and eventually qualified ninth.

However, only he and 10th-placed Antonio Giovinazzi are committed to starting on the softs, and with most of the drivers behind likely to avoid the softs both men risk being stuck in a no-man's land on a tyre that will not last long in the race.

"FP3 was decent, we were sixth," said Gasly. "And we made some changes we thought would be going in the right direction, but we need to analyse.

"We lost a lot of grip and lost a lot of pace, and in the end we could not really run the medium in Q2, so we had to put the soft and the overall pace was not great. It was quite a difficult qualy."

Gasly admitted that he could be in for tough Sunday afternoon on the soft tyre.

"It's too early to know exactly what we're going to do but tomorrow, for sure, they are planning a really hot day so it's not going to be easy with the soft set but we will have to find a way to make it work.

"The guys in front start on mediums, the guys behind I don't expect anyone to start with the softs. Maybe there's something we could do with the strategy, a bit different to the others, as we start on a different tyre.

"We need to have a look at everything. But first stint with this tyre is maybe going to be a bit challenging."

Gasly admitted Red Bull was surprised the chasing pack was so close, with McLaren in particular showing very strong form.

"We probably didn't expect to be that close from the midfield coming here with the upgrades we have," said Gasly.

"I think the others have also been pushing and we probably make a step but the others are also recovering and finding new parts and I think McLaren seem to clearly have made quite a step.

"I think it's difficult to say if it's this special track. We know the more technical it is - like Monaco, for example - the better it is for us, because Honda is doing a good job and recovering the performance but compared to the Mercedes and Ferrari engines, we are still losing quite a bit.

"Clearly, on our side, there was something we did wrong for this qualifying but looking at Max and the gap with McLaren, they are quite close so hopefully on other tracks we can have better overall performance. I don't have the answer now."