George Russell hopes the flexi-floor clampdown from the Formula 1 Belgian Grand Prix will bring Mercedes closer to the fight at the front against Ferrari and Red Bull.

In a move to restrict excessive car bouncing, the FIA will introduce measures aimed to halt the phenomenon by enforcing an Aerodynamic Oscillation Metric (AOM) that teams cannot exceed from the Spa-Francorchamps race.

It is also understood that the FIA is installing measures to outlaw tricks some teams are believed to have made in flexing their floors and planks to gain performance.

The measures have been met by resistance from some teams who argue the FIA shouldn't be involved in how squads set-up their cars, while others argue car development has seen the problem severely reduced in recent races.

While the full impact of the AOM will be realised at the Belgian GP, having been just an advisory measure in the races before the summer break, Russell believes it could prove beneficial to Mercedes against its frontrunning rivals.

"I think there is no doubt that Ferrari and Red Bull will have pushed the regulations in that regard and we've respected it as the regulation was intended," Russell told Sky Sports F1 after the Hungarian GP. 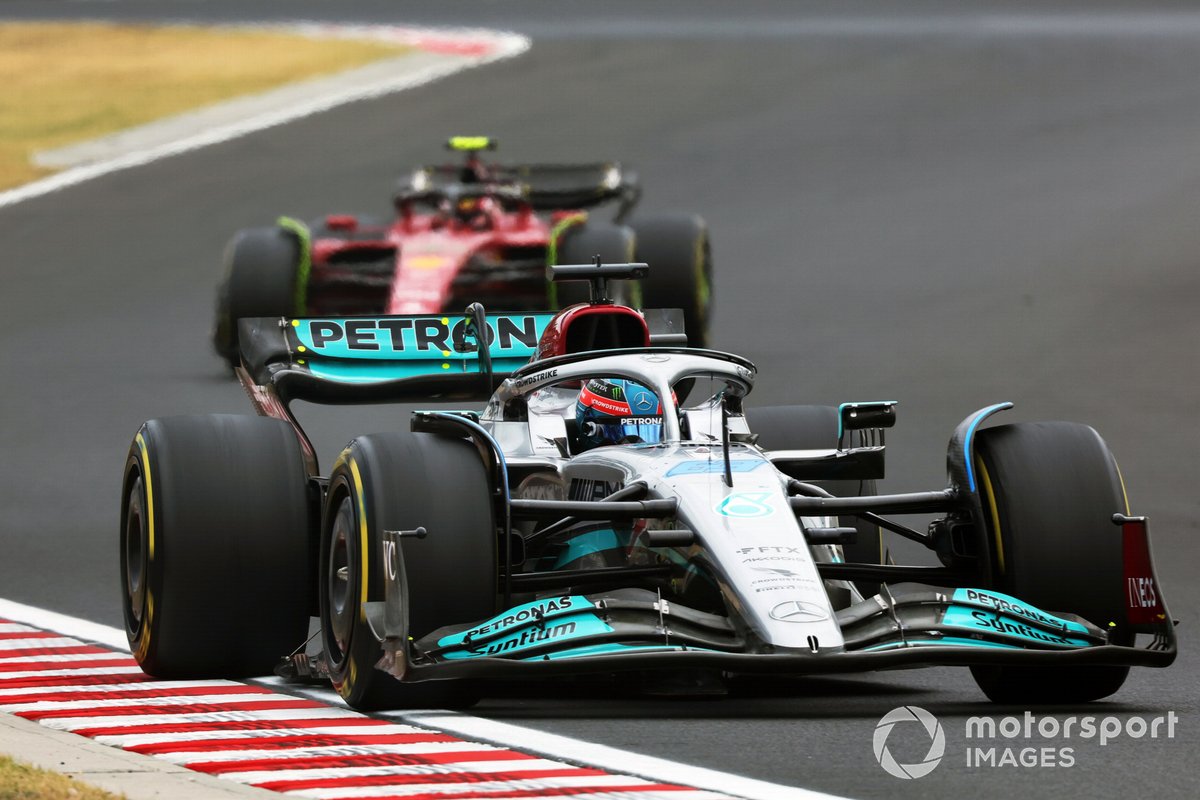 Reflecting on Mercedes' progress overall, Russell feels if the German manufacturer can get in range of the Ferrari and Red Bull pace then it can fight for regular podiums and possibly wins, having been impressed by the rate of improvement his team has produced with its W13 F1 car.

"Max and Red Bull are cruising," he added. "I think Max and Charles, they are on a similar level at the moment but I really feel for Charles because he is doing a superb job at the minute and he has been on the receiving end of a lot of bad luck.

"Max and Red Bull are just absolutely solid week-in, week-out. We've seen from the last couple of race weekends that they can just bring the car home and pick up the pieces but there is no doubt we are making progress.

"As a team we finished almost a minute behind the race winner at the start of the season but now it is 10 seconds in the last couple of races. So if we can continue on that path we will definitely be in the hunt.

"Spa is going to be interesting, there's going to be some changes to some regulations which may bring other teams towards us and I think we as a team have a lot of confidence in ourselves and faith that we are doing a great job and there is no reason we can't be in the mix."

Between June's Azerbaijan GP and last month's Hungarian GP, Mercedes saw at least one of its drivers on the F1 podium in the six-race stretch.

While in both France and Hungary Russell and teammate Lewis Hamilton finished on the rostrum together, with the younger Brit also taking pole position at the Hungaroring.