Giedo’s appointment to the F1 team is the natural step for the Dutch driver after he spent 2012 competing with Caterham Racing in the GP2 Series, combining his GP2 season, in which he scored six podiums and two race wins, with six FP1 outings for the F1 team.

Cyril Abiteboul, Team Principal, Caterham F1 Team: “Everyone in the team is delighted that we can finally confirm that Giedo will be racing for us in the 2013 FIA Formula One World Championship. He has been part of our family since early 2012 when he joined our GP2 team and was appointed as Reserve Driver for the F1 team. He acquitted himself extremely well in both his GP2 season and his six FP1 sessions, progressively improving his outright pace, technical feedback and his relationship with his engineers and mechanics, giving us the clear justification for promoting him to F1.

“This is the next natural step for Giedo with our team. We continue to grow as a team and we are committed to giving young talent across the motorsport industry the chance to grow with us and this is Giedo’s opportunity to show he deserves his place at the very highest level of global motorsport. He and Charles have been team-mates before so he is an excellent choice to partner Charles in what is going to be another very interesting season, and we are all looking forward to seeing Giedo continue to progress as he takes on the ultimate challenge of F1.” 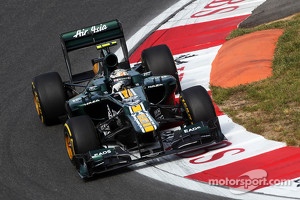 Giedo van der Garde: “I am absolutely delighted to confirm that I will be racing in the 2013 F1 World Championship with Caterham F1 Team. I want to thank Cyril, Tony Fernandes, McGregor and everyone who has worked so hard to make this happen.

“I know I am ready to take the step up to F1 and all the work I have done throughout my career, and particularly in the last year with this team, has brought me to my ultimate goal. Throughout 2012 I was able to fully integrate myself into the team, both through the FP1 sessions I ran at a number of tracks that were then new to me, and as Reserve Driver, fully embedded with the team throughout the season.

“Now I can continue to learn at the highest level of motorsport and show that I am ready for F1. I cannot wait to start work.”