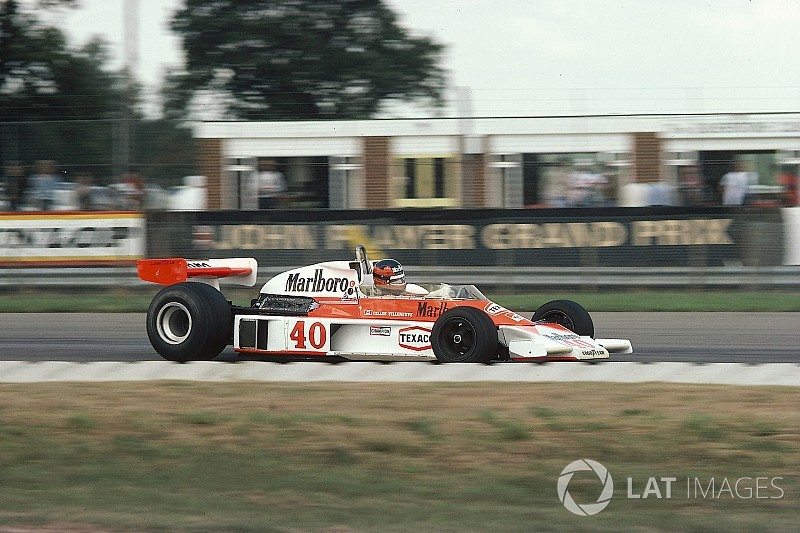 A few years ago, René Fagnan had the opportunity to chat with the man who attended the car entered by Team Marlboro McLaren in 1977 for Gilles Villeneuve who contested his first Grand Prix.

On February 21, 1977, Gilles Villeneuve signed a contract with McLaren while pursuing his career in North America, competing in the Formula Atlantic series against the likes of Keke Rosberg, Bobby Rahal, Bill Brack and F1 racers such as Didier Pironi, Jacques Laffite and Patrick Depailler.

The contract mentioned, “McLaren wants to enter the services of the Driver [Gilles Villeneuve] to drive a McLaren car in certain 1977 Racing Events”, without specifying the number of Grand Prix events that meant.

Finally, McLaren decided to enter a car for Villeneuve at the British Grand Prix at Silverstone in July 1977.

A talented mechanic at Team McLaren, Australian Leo Wybrott got a promotion in the mid-70s.

“My position at that time at McLaren was project manager,” Wybrott told me. “My responsibilities were building and testing the new cars, so I was no longer a member of the actual race team. When there were special events, Teddy [Mayer, the team director] would leave me and my guys to run that car. This is how we got to run Gilles Villeneuve in 1977 and Bruno Giacomelli in 1978.”

Getting to grips with the M23

Villeneuve had never driven a Formula 1 car before, and it was decided that he would race an older machine.

“James [Hunt] and Jochen [Mass] were to race their usual M26s,” Wybrott said. “The older M23-Cosworth we allocated for Gilles was chassis number 8, the newest and best M23 available. Gilles came to the factory for a seat fitting, and he got a tour of the place with Teddy [Mayer].”

Wybrott got help from Stevie Bun and John Hornby to run Villeneuve’s car at Silverstone. As there were too many entries for the race, the organisers held a pre-qualifying session for 13 drivers, including Villeneuve.

Only the seven fastest competitors were allowed to continue during the weekend.

“From very early on, from the moment he [Villeneuve] drove the car, there was a confidence and an ability about the person,” Wybrott recalled. “It's one of those things you come across. From the lap times he was setting, we knew he was very capable.”

It’s no secret that the Canadian pirouetted his McLaren on several occasions during the practice sessions.

“He spun two or three times during the pre-qualifying session, but emerged quickest [with a time of 1:19.48],” the former McLaren man said. “Then, in the first practice session, he had more high-speed spins, but he was getting to grips with the car. He was always bringing it back in one piece. He ended up 11th fastest. This is when people started to become aware of his performance.”

Wybrott added that Villeneuve was in full control of the car and wanted to change the set-up so it would better suit his driving style.

“We started to change the set-up of the car and he went faster and faster,” said Wybrott. “At one point, we were 4th or 5th quickest. He eventually qualified 9th [with a time of 1:19.32]. We did not qualify better because we had not access to the soft Goodyear tires.”

Wybrott confirmed that Villeneuve was almost as interested in the design and the construction of the car as he wanted to drive it to the absolute limits.

“He was setting the whole place alight,” he declared. “He was a joy to work with. Gilles stayed with us all nights, and he wanted to understand the complexity of the car. He stayed and talked to us. It was a genuine interest from his part to understand how the car was made and worked.”

Villeneuve made a good getaway and he completed the opening lap in seventh place, ahead of one of his teammate, German Jochen Mass in the newer M26. On Lap 10, the Canadian appeared in 12th place. One round later, he dived into the pits.

“We saw him take the pit road flat out and he stopped at his box at the other end of the pits,” Wybrott recalled. “The cars ran at extremely hot temperatures at that time, the water barely managed to keep the cars cool enough to run. But the moment you stopped the motor, the heat sunk from the engine into the water system without the pump circulating the water, and they just boiled instantly. The pressure cap on the header tank released the water through the bypass. And water poured from under the car. Gilles showed Stevie [Bun] the needle of the water gauge stuck at maximum temperature. Stevie looked at the water pouring from the engine and was ready to tell him to retire.

“I ran down the pit lane as fast as I could. Gilles was still in the car and he showed me the water gauge. I told him to watch the oil temp indicator – that will be a reliable source of information. The water temp did not matter. We quickly added some water in the system. We got the starter out and told him to fire the engine. He rejoined the race in 21st place, and he pushed really hard to finish 11th, two laps down,” Wybrott said. Villeneuve set the 5th fastest time of the race in 1:20.14.

Briton and fan favourite James Hunt had won the race in the leading McLaren, having beaten Niki Lauda in his Ferrari and Gunnar Nilsson in a Lotus.

The small team that ran the No. 40 McLaren was immensely cheerful with the result.

“We were all very impressed with him,” Wybrott concluded. “Whenever he and his wife Joann saw me afterwards, they both were very kind to me and came to talk a bit. Gilles was a true gentleman.”

How Ricciardo banished his Monaco ghosts in 2018

When Mercedes "screwed up" Hamilton's race in Monaco