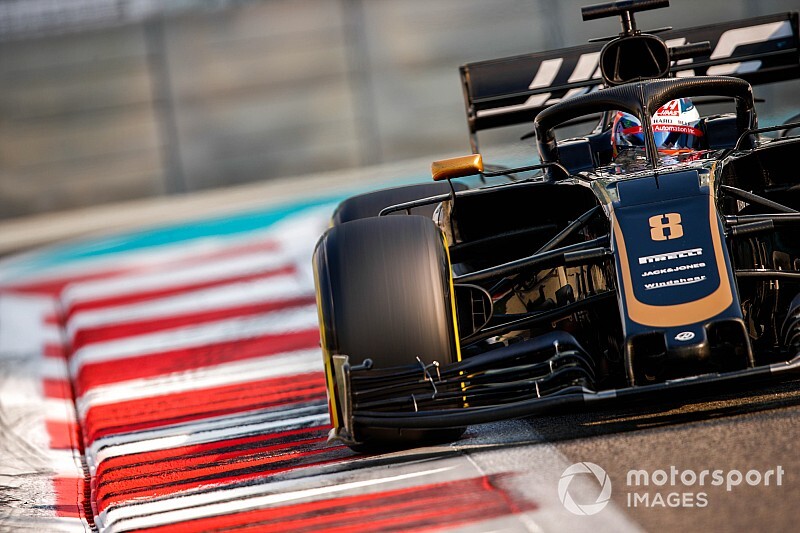 Haas Formula 1 driver Romain Grosjean has indicated he remains unconvinced by Pirelli’s 2020-spec tyres after sampling them in post-season testing in Abu Dhabi.

The new tyres’ debut during the United States Grand Prix weekend elicited a largely negative reaction from drivers and teams, leading to a proposal to scrap the 2020 version and continue with the current year’s specification instead.

Such a move would require the approval of seven teams or more, and the 2020 compounds’ performance in this week’s test is likely to prove key to the final decision.

Pirelli said it expected the two days to offer a “more representative” picture, thanks also to the lower prescribed tyre pressures.

However, as the sole 2019 regular speaking to media after the opening day of running, GPDA director Grosjean indicated that his opinion “stayed in the same line” as after Austin.

Asked which spec he would prefer to race next year, he said: “I don’t know. It’s too early to say. But it shouldn’t really be a question, should it?

“That’s where we are. If you ask me right now, I don’t know. Depending on the track I would tell you one or the other. [But] this is not going to happen.

“After one year of development, you would like to be saying ‘I am going to race the 2020, no question’.”

Pirelli has sought to deliver lower degradation, a wider working range and less overheating with its new spec, with it repeatedly stressing the latter target was due to the drivers’ wishes.

Grosjean said that his team ran many comparisons between 2019 and 2020 versions of various compounds on Tuesday, adding that “some were close, some were far”.

“They [the 2020 tyres] are different,” Grosjean said. “There are some positives and there are some negatives.

“They did a big change. Again, we need to look at how we’ve been running the cars and make sure we are on the maximum of everything, but if you ask me if I’m very happy about the new tyres, and [if] this is going to solve some of the problems – the thermal degradation, sensitive to following another car – I just have to tell the truth. And no, it’s not going to change that problem fully.

“The degradation on some compounds was better. Being able to run lower pressures also helps you. So those are the positives. But it’s not what you would dream of.”