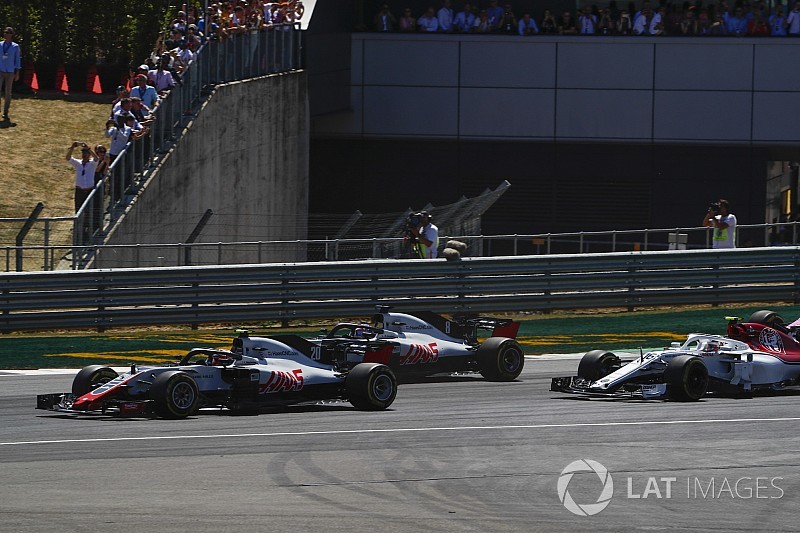 The pair were fighting for seventh place after the start and entered the Turn 3 right-hander at Village side by side, both locking up under braking.

Grosjean, on the inside of the corner, slid into Magnussen, hitting his teammate with his left front wheel and significantly damaging the floor of the Dane's VF-18.

Both lost track position as a result of the incident and couldn't recover fully, with Magnussen finishing ninth and Grosjean retiring after a fast crash with Renault's Carlos Sainz.

As the race concluded, a frustrated Magnussen radioed to his team: "Good job guys, but I'm not happy. [Censored]. You all know why. Not good enough. You guys deserve better."

Speaking to the media afterwards, Steiner reckoned Grosjean missed his braking point in the collision with Magnussen.

"Romain apologised to Kevin, I guess he waited with his braking a little bit too long.

"I think they recovered pretty good once they got the tyres to work, just to deal with that.

"The car wasn't really slow but we had quite big damage on the right-hand side of the floor, quite a big chunk missing."

The stewards investigated the collision between the Haas cars but opted to take no further action, ruling that the crash between Kimi Raikkonen and Lewis Hamilton, which happened seconds earlier at the same corner, "influenced both" Magnussen and Grosjean.

The collision between Sainz and Grosjean at the fast Copse right-hander, which ended with both cars in the gravel, also yielded no sanctions.

"The drivers gave clear evidence that agreed – Car 55 [Sainz] had a run on the outside of Car 8 [Grosjean] going into the very fast turn 9," the ruling read.

"While the driver of car 55 did slightly tighten his line towards the apex, the drivers agreed that this was not the entire reason for the incident.

"The driver of Car 8 explained that he had braked where he would not normally brake at the entry of the turn to avoid an incident, but as soon as his front wing was in turbulence from Car 55 he had a slight understeer and, as the cars were very close, they made contact and subsequently both cars crashed.

"It was a racing incident, and the Stewards determined that neither [driver] was wholly or predominantly at fault, and took No Further Action."