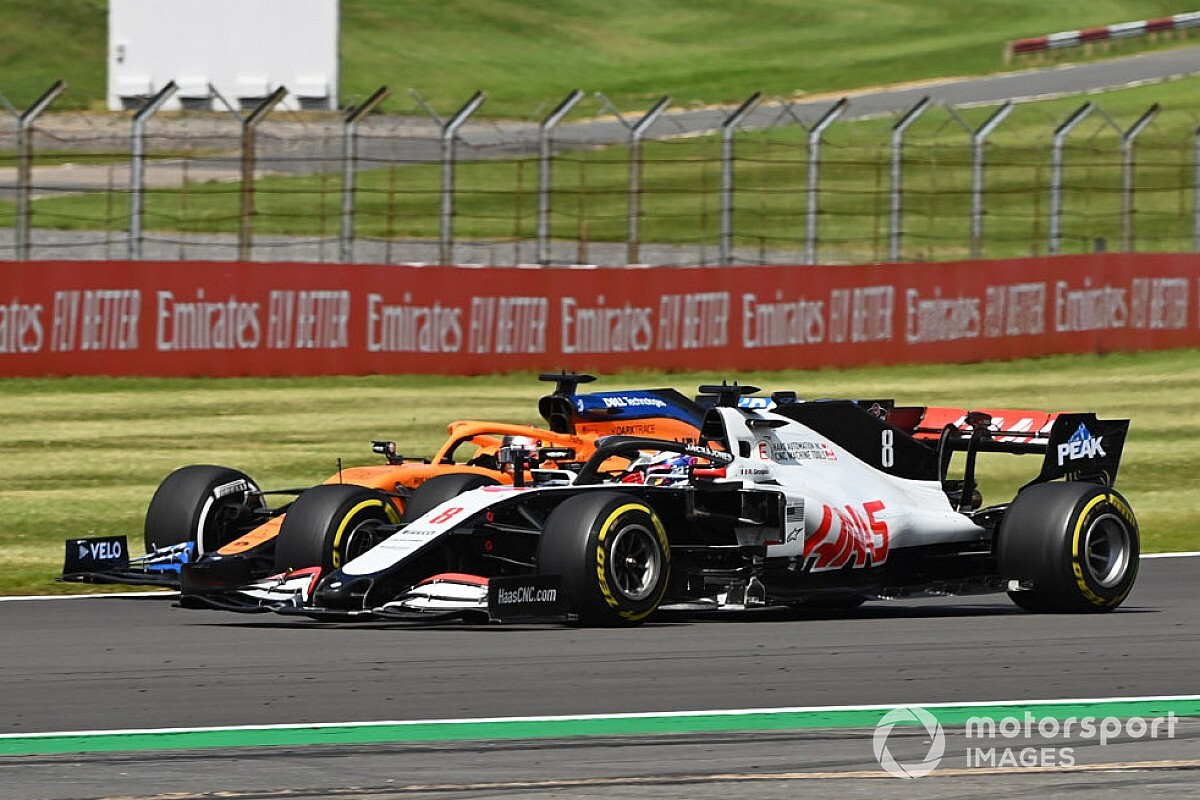 Romain Grosjean says he has no regrets about his robust defensive driving in the British Grand Prix – despite getting a black-and-white flag and a formal warning for his actions.

The Haas driver came under fire from Carlos Sainz and Daniel Ricciardo for some late defensive moves as they battled for position at Silverstone on Sunday.

And while he accepts that the two manoeuvres were on the edge, he is clear that he left enough space for his rivals – and did nothing that Max Verstappen hadn't tried out in recent years.

Grosjean said that the lack of any specific rules forbidding such late blocks, when Verstappen had got away with similar tactics, meant he felt he was entitled to drive in that manner.

"I think a few years ago we really wanted to put a rule in place that you can't move on the braking point after some of Max's defending, but there weren't any rules put in action," he explained

"So yeah, I pushed a bit the limit today, got a warning, but I don't regret anything. You know I tried to do the best I can."

Grosjean did not think his moves were as dramatic as others made out, especially because he was clear about how much track space he left both Sainz and Ricciardo.

"I think in both cases I moved a little bit late, but I always left the car width," he said.

"They want to clarify the fact that we cannot move that late, which I agree with, but there were no real rules beforehand and Max Verstappen used it a lot during his racing, so I thought why not?

"Why can't I take advantage of that? Because it's not everyday that we are running sixth or seventh in the race and I had to give everything I could to defend."

F1 race director Michael Masi said that he would discuss the matter with drivers at the next race, in a bid to ensure that everyone knew what was acceptable behaviour.

"This has actually come about following extensive discussions with the drivers throughout last year," he said.

"The stewards have given Romain the warning in accordance with the ISC side of it. And further to that, we've agreed that we will discuss it at the next drivers' meeting and go from there.

"But it's actually come about as a result of the drivers all requesting a crackdown in that area because they thought it was something that needed to be clamped down on a bit more."

Grosjean said he would welcome a formal clarification about what is and is not allowed when defending positions into braking zones.

"Having a bit of a clarification on that one would be nice, but also we don't want to push 'let them race' away from Formula 1, because you know, we want to have fights and we want to be pushing hard," he said.