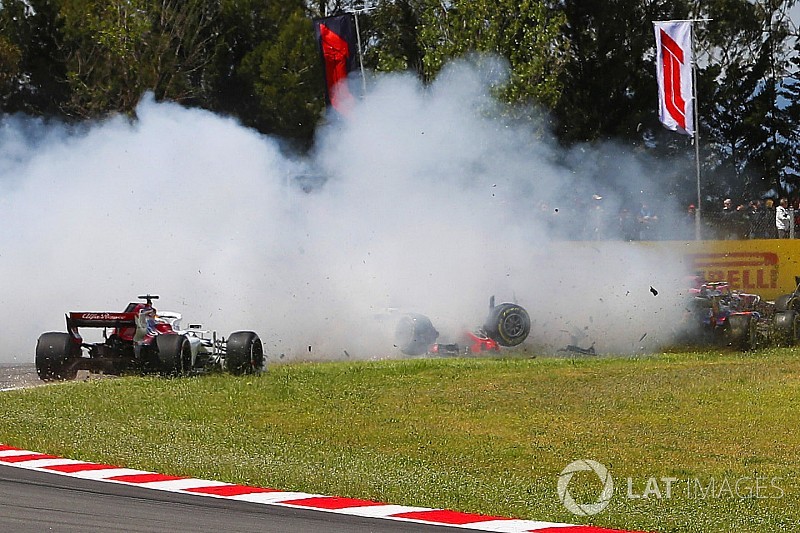 Grosjean lost control at the long Turn 3 right-hander on the opening lap at Barcelona and spun into the path of following cars.

He was collected heavily by Nico Hulkenberg's Renault and Pierre Gasly's Toro Rosso, putting all three out and causing a long safety car period.

The stewards' panel, which included ex-F1 racer Derek Warwick, gave Grosjean a three-place grid demotion and awarded two penalty points - taking his running total to five - as they felt he made the wrong decision when trying to recover from the spin.

"The driver explained to the stewards that he felt that his momentum was going to carry him to the center of the track, and therefore made the decision to apply power in an attempt to cross to the right side of the track and get out of the way of the cars behind," said the stewards' statement.

"The driver stated to the stewards that he made the decision to cross the track, trying to avoid the other cars and that he felt this was his best option.

"The stewards found that while it is speculation as to where the driver's car would have ended up had he chosen other alternatives, it is certain that while crossing the track in front of the following pack of cars, which he chose to do, that a collision occurred.

"Further, in reviewing the video, the stewards found that the car was following the line on the left side of the track and was almost fully off the track, when he made the decision to cross it."

Grosjean had earlier insisted there was nothing more he could have done to avoid causing the collision once he had begun to spin.

"I don't think there is much to do," he told Sky Sports F1. "If I'd braked the car would have slid the same way.

"I tried to stay on the throttle to spin it and not face everyone. It's quite a normal human reflex. Once the car started going forwards it was very difficult."

But Hulkenberg was unimpressed with Grosjean.

"He likes spinning a lot during the weekend but lap one is not a good time with all the cars around. He has to look at it and do some homework."

Gasly agreed that maybe Grosjean "could have braked and it could have ended up differently", and said it had been a frightening incident.

"I tried to release the steering, but the impact was pretty big."