Haas Formula 1 team principal Gunther Steiner has acknowledged Romain Grosjean will be "on thin ice" in forthcoming grands prix as he risks a one-race ban through accumulated penalty points.

Receiving 12 penalty points within a calendar year triggers a race ban, and Grosjean's two points for ignoring blue flags in the Singapore GP has brought his total up to nine.

One point will expire after the Mexican GP next month and another two after November's Brazilian GP, but he remains at risk for the next four events.

"He should be very careful but I think he knows that," said Steiner. "We are on very thin ice at the moment with that."

The point system was devised by FIA F1 race director Charlie Whiting after Grosjean himself received a one-race ban from the 2012 Italian GP following a series of controversial incidents culminating in the massive start crash in Belgium that year.

"It's F1, and we still need to deliver a good performance," he added.

"So I'll make sure that I don't do anything silly, but I'll still be pushing and racing and doing my job.

"When you look back at the points I got, some you can really explain, some others are more questionable, but there they are."

Grosjean called the penalty he received in Singapore "harsh" given that he was busy with his own battle with Sergey Sirotkin over 14th when leader Lewis Hamilton caught him.

"I'm sorry I blocked Lewis, it looked really bad because Sergey was bloody slow and we couldn't do anything. So we lost a lot of time," said Grosjean, who was also given a five-second time penalty that dropped him from 13th to 15th.

"It was a tricky situation I got caught in. Sergey was six seconds slower than everyone, I couldn't know at the time, so we were fighting and obviously the gap was big.

"I think it was 11 mini sectors before I let Lewis by. It cost a lot of time, but it was just the pace we were doing.

"Getting points there was harsh. I'm here to race, I'm here to get Haas into fourth position in the constructors' championship.

"So I'm just going to do my best for the team and try to avoid doing anything silly."

Asked if he would discuss the Singapore penalty with Whiting, Grosjean said: "I'll see him at the drivers' briefing, see if the drivers are bringing it up.

"Again it was not my intention to block anyone, we don't have any lights on the cars, so the mirrors in the dark, they are dark, the pace we were doing was completely off the pace.

"In the end it didn't change anything for the race. Lewis won and Max [Verstappen] was second. That's the main thing.

Steiner agreed that the Singapore penalty was harsh given the race situation Grosjean was in.

"We always talk about more racing, but as soon as they start to race we have to stop [for blue flags], because a rule comes out that you are not allowed to race," he said. "We want to have our cake and eat it.

"But ultimately he got the penalty and now he has to be careful.

"Fair or not fair, we couldn't score points anyway, so it doesn't really matter for us. It's just not ideal for Romain's penalty point account." 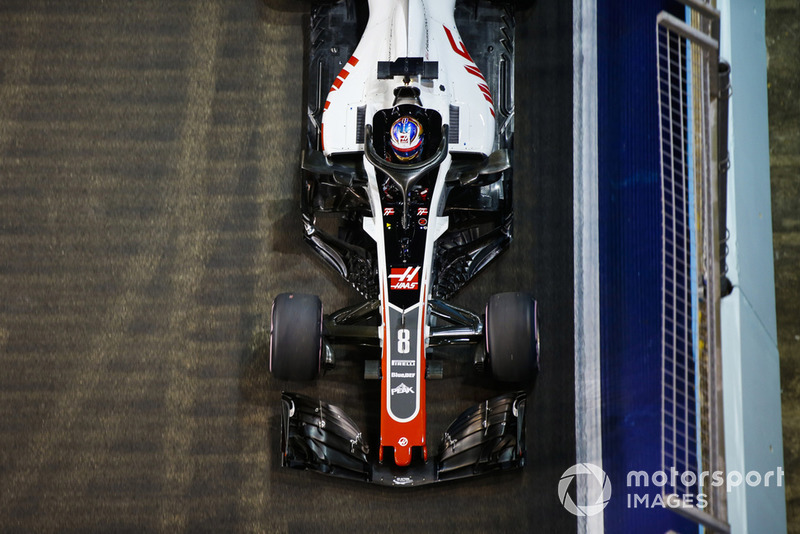 The F1 driver already racing for a 2020 seat