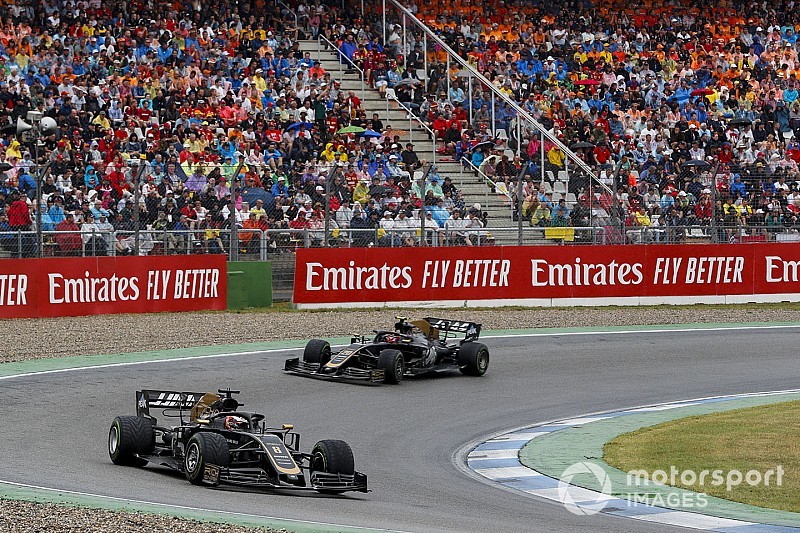 Romain Grosjean says he was more worried about getting dropped by Haas for under-performing last year than he is this time around for his collisions with teammate Kevin Magnussen.

Haas is poised to impose team orders to stop Grosjean and Magnussen racing each other from now on, in the wake of their latest clash at the German Grand Prix. It was the third time this season that the pair have come to blows, following incidents at the Spanish and British Grands Prix.

While team principal Gunther Steiner has said that dropping one of the drivers mid-season would be a desperate measure, there remains some uncertainty about whether the current pair will continue in 2020.

And while Magnussen has a firm contract for next year, any change would likely be at the expense of Grosjean whose deal runs out at the end of this season.

Asked ahead of the Hungarian Grand Prix about whether he was worried his future at the team was being put in jeopardy by the situation with Magnussen, Grosjean said: “I was more worried last year than this year.

“Last year there were a lot of reasons that I could have ended up this year at home. I did many mistakes that I shouldn’t have done with my experience. But I think since then I have recovered pretty well.

“I think everything we have been saying this year – the eye opener for the guys on reverting back to the old spec car, because I asked, shows that the experience is very important in Formula 1.

"Everything in the team has now changed. The focus is on the different parts and how we make sure we improve the car other than we just put upgrades without really knowing where we are.

“The races I’m happy with my performance. I think in qualifying I could have been better earlier in the year but now it’s back to where it was. As I said, last year there were many reasons, to be frank, to stay home. This year I guess there are many less.”

Both Grosjean and Magnussen are adamant that their relationship is better off track than it has appeared to be from their numerous incidents on it.

Magnussen said: "I think in the heat of the moment, we’re blaming each other on the radio and stuff like that – but what people don’t see is that we get together between the races and talk it through and try to be constructive and move on in a constructive way.

“Apart from those incidents on track, I feel that we have a pretty good working relationship. And actually, Romain is a cool guy, and we actually have a good time when we go to work.

"So, it’s being blown out of proportion a little bit. I know you guys love a bit of a conflict and stuff like that, so… but it isn’t as bad as it looks.”

Grosjean added: “I think the relationship, people could think that it doesn’t look good but actually the relationship with Kevin is really good. We phone each other once a week or so. We sat down and said, ‘what can we do better’, just to make sure that’s not happening again.

“Obviously we’ve got the same car, so it’s happening that we are side-by-side on track more often than with the Mercedes, for example. Yeah, there are things we can probably do better.

“I think the most important is that we always try to do our best for the team, and give our best and maybe just the cursor wasn’t well positioned on some of the occasions we had, and we just going to make sure we get better from there.”