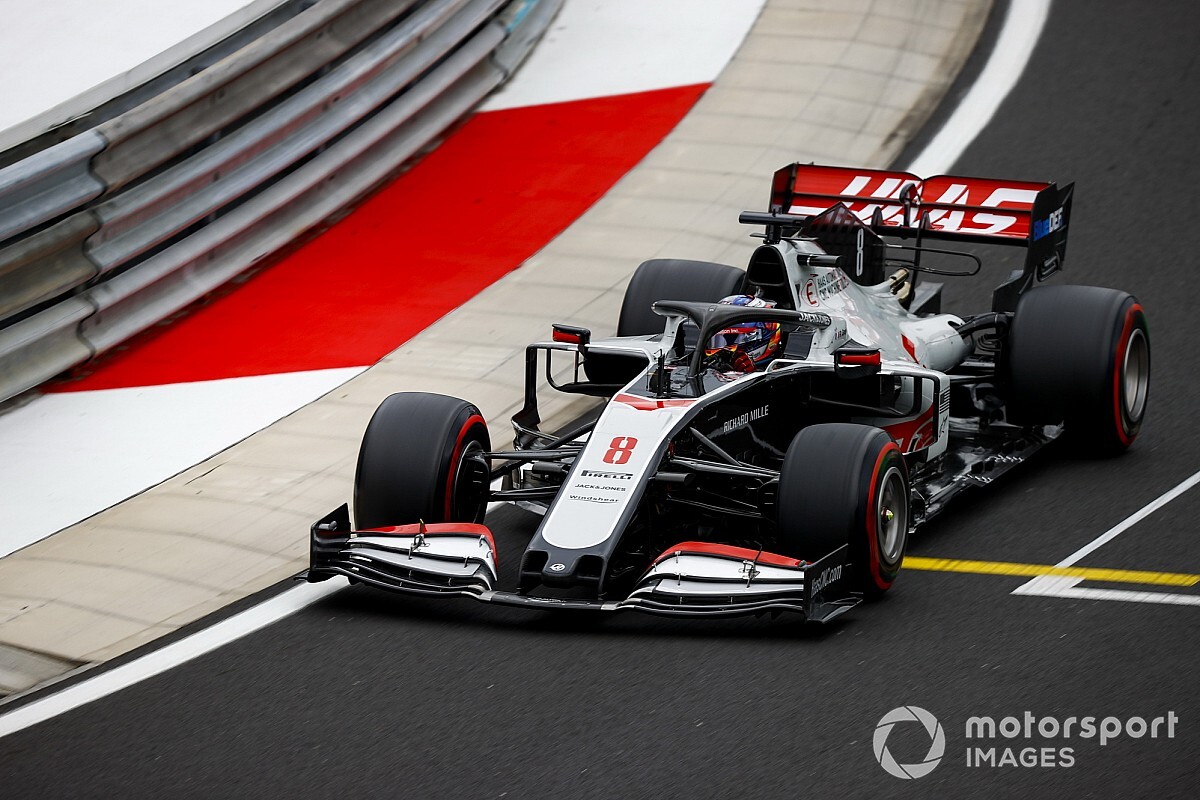 Romain Grosjean says Haas would "1000%" repeat its Formula 1 Hungarian Grand Prix call to change tyres on the formation lap, even though Grosjean and Kevin Magnussen were later penalised.

Both Haas drivers came in to change tyres before the start in wet-dry conditions at F1's most-recent race at the Hungaroring, boosting them up the order in the early stages as their slick tyres were quicker than the intermediates the rest of the field were running.

Although they slipped back later in the race, Magnussen finished ninth on the road to score the team's first points of 2020.

But several hours after the race, both Haas drivers were given a 10-second time addition for breaking Article 27.1 of F1's sporting rules that states F1 drivers must "drive the car alone and unaided" and means the only communication allowed on the formation lap concerns safety matters, with Magnussen dropping to 10th in the final results.

When asked by Motorsport.com if the team would make the same call again in the same conditions given how the post-race situation with the stewards played out, Grosjean said: "1000% [we'd do the] same thing. It was the right call and I was actually surprised that not more people did it."

Magnussen added: "Yeah, of course, but we would change the way we do it to try and not get a penalty."

The Danish driver said "it feels like these rules weren't really made to stop what we did in the race" and outlined his thoughts that the regulation – which relates to the clampdown on team-driver radio communication that came after it was deemed too prevalent from the 2014 season – should be updated.

"[The rules] were meant to stop us fiddling around with clutch settings and race start procedures, to try and make the race starts more random," said Magnussen.

"I don't think they were meant to stop strategic calls before the race, but it is what it is.

"And maybe they need to look at it for that – for strategic calls – because I think if we aren't allowed to do that that is going to take away from the show.

"I think it's exciting when you have these conditions where it's like right on the crossover that you can see these strategic calls.

"It would be good if they could allow that clearly in the rules, I don't think it was 100% clear.

"I didn't know [the team was in trouble] until I landed in Denmark after the race on Sunday.

"So I hadn't thought about it because in my mind we're not allowed to talk about any procedures – the guys aren't allowed to give us any instructions on burnouts and any driving aids on the formation lap.

"I wouldn't say it was completely clear – not completely straightforward. But at the end of the day it is what it is."