Haas team boss Gunther Steiner thinks Formula 1 should consider scrapping the blue flag rule altogether because it would help spice up the action. 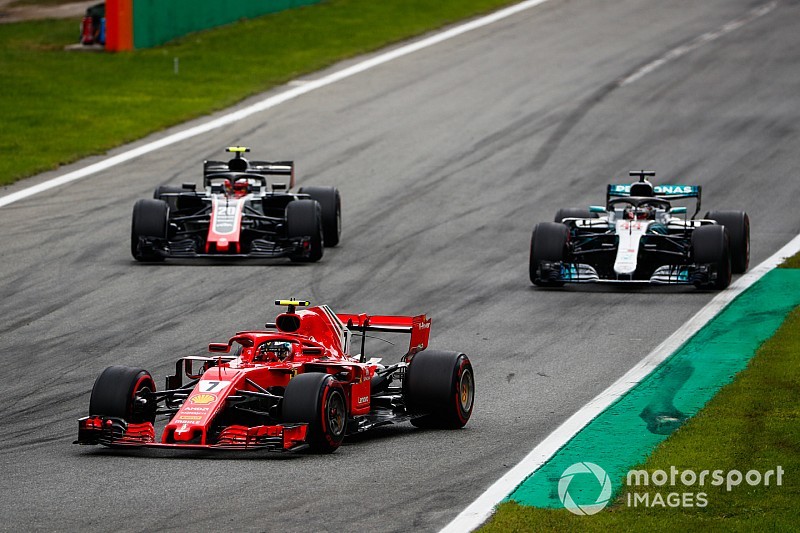 The issue of blue flags has been thrust back onto the agenda after the race leaders hit trouble with backmarkers in Singapore a fortnight ago.

Race winner Lewis Hamilton struggled to find a way past the battling Romain Grosjean and Sergey Sirotkin, while Valtteri Bottas lost time being unable to close up enough on Nico Hulkenberg in the closing stages to trigger the warning flags.

Although F1 race director Charlie Whiting said after Singapore that he saw no reason to change the rules, others have suggested that F1 would be better off forcing race leaders to find their own way past lapped traffic.

Such a radical shake up of the rules is something that Steiner would be supportive of.

"I would agree with that," he said. "It's part of racing, and for the general public as much as you can say 'I'm the leader I can do what I want' they always say they have no racing.

He added: "We keep on saying we need to get the field close, but what we are doing is saying the guy who has an advantage in front will get even more of an advantage by letting him through, so it's effectively all for the rich."

One of the biggest problems with Singapore was that it was hard for drivers to get within the 1.2 seconds of the backmarkers that they needed to for the blue flags to be triggered.

Bottas, who lost lots of time after being unable to get close enough to Hulkenberg, believed that the 1.2s rule was never going to work everywhere.

"Sometimes this new 1.2s rule is good and sometimes it's a bit tricky to get close enough to trigger the blue flags, like what happened to me in Singapore but it is also going to be a compromise, it's never going to be perfect," he said.

"In the end, for all the lead cars lapping, it is the same. Sometimes you get more luck with it, sometimes more unlucky and that's how it goes. For now it's fine."

The Finn's view was echoed by Fernando Alonso.

"I think [with] the cars we have now it's quite complicated to set a system that's okay for all circuits," said the Spaniard.

"Spa is quite easy to get close to one second to the car in front, in Singapore it's quite difficult. Just because of the nature of the circuits, and some different layouts we have in the championship.

"But it's probably more complicated to have a variable gap to show the blue flags. At the same time there are other series that don't have blue flags. You need to play your cards, your strategy, with those cars in front of you.

"There are opinions either way and F1 has been with this current system for I think for the whole history, so we should not be too worried about only one race problem."

Kimi Raikkonen reckoned that the difficulties with backmarkers would remain until the rules were actually tightened up to punish offenders more.

"As long as there are not really really strict rules that you get penalties straight away if you do not move over it will never really change," he said.

"I think there's too much freedom in many ways when you are lapped to wait a certain time, and we all know when it is because these things have been discussed in drivers' meetings pretty much every time."