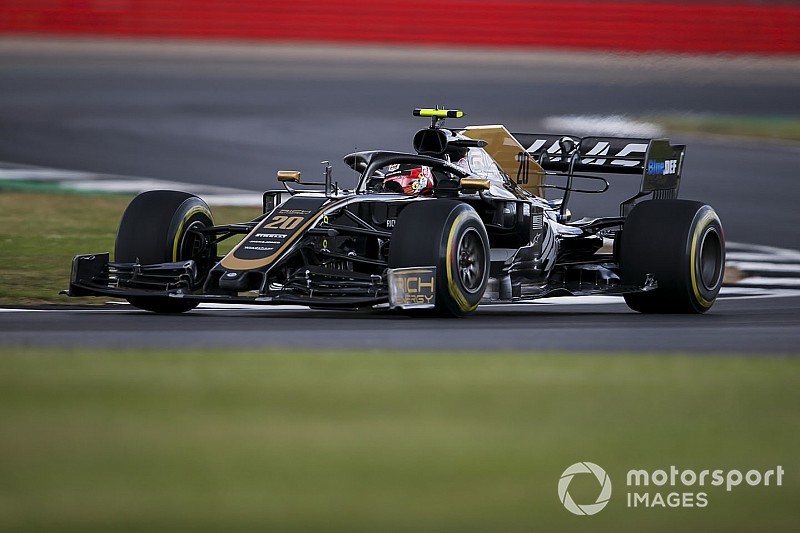 The Haas Formula 1 team has drawn no firm conclusions from running different spec cars at Silverstone – and the experiment looks set to continue at the next race in Germany.

Romain Grosjean reverted to the aerodynamic package used at the start of the season for the British Grand Prix weekend, while Kevin Magnussen has stuck with the latest spec, first seen in Barcelona.

Another update package is coming for Germany, which the team believes is quicker than the Barcelona update – so if there is another split for the next race, it will be between the new Hockenheim spec and the original Australian version.

Grosjean ended up faster of the two Haas drivers in qualifying at Silverstone, but both had difficult sessions, and the team says it needs more time to properly study the data from the last two days, as well as waiting for the outcome of the race.

“There are some big weaknesses on the old one that we were aware of in winter testing, and some of them were really addressed with the new package. But obviously the new package doesn't quite deliver in terms of laptime as much as it should.

“So where is it, what can we do better, what can we understand, what are the next steps? Those are the discussions we're going to have next week I guess and try to grow with the boys, and look piece by piece which one is doing the thing it should be doing.”

Magnussen added: “They need a bit of time to go through everything and I think we'll get more answers next week when they've gone through all the data and numbers. But from Romain's comments, he's saying the car feels better, the old car.

“I feel like he's been too close to me considering I have the upgraded car all weekend, and then in qualifying, he got ahead, but I think something must have gone the wrong way for us in our side of the garage between FP3 and quali.”

Team boss Gunther Steiner admitted that there was still a lot of work to do to establish which spec was faster, saying the team had been unable to come to a conclusion yet.

He confirmed that the choice for Hockenheim will be between the new spec and the original version, so the team won’t end up with three options in play.

“This [Barcelona spec] will be forgotten. And then we need to compare what we have got, because maybe that spec solves the issue, so there is no point to compare with this one, because this one is the one we are not the happiest with, or the drivers are not happiest with.”

Verstappen: Red Bull "not too far away" on the straights