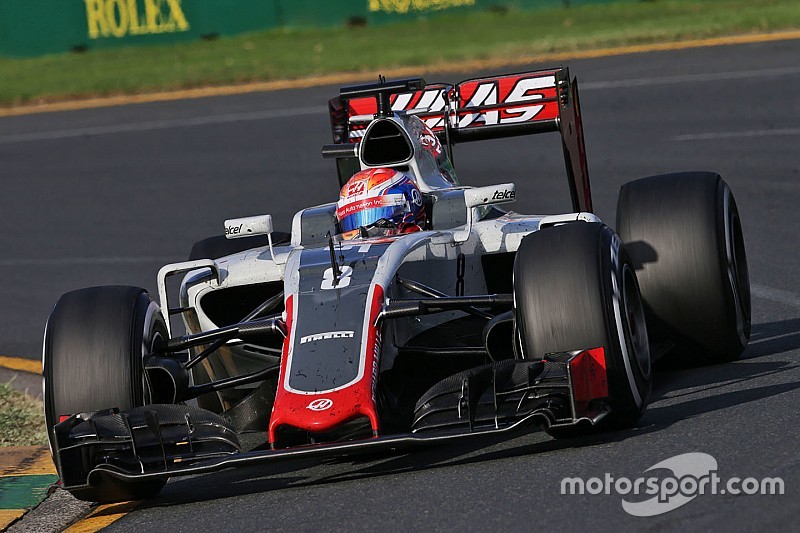 Haas F1 Team made history before and after the 32nd Australian Grand Prix Sunday in Melbourne.

After starting 19th, Haas F1 Team driver Romain Grosjean finished an impressive sixth, earning the team eight points in the constructor standings. The last time a Formula One team scored points in its debut race was in the 2002 Australian Grand Prix when Mika Salo finished sixth for Toyota.

The fortunate outcome was due in part by the misfortune of Grosjean’s teammate, Esteban Gutiérrez, who was taken out of the race in a spectacular accident involving McLaren driver Fernando Alonso. On lap 17 while entering turn three of the 5.303-kilometer (3.295-mile), 16-turn circuit, Alonso moved to the outside of Gutiérrez in an attempt to overtake. Alonso’s right-front wheel touched Gutiérrez’s left-rear wheel. The impact launched Alonso into the air and sent Gutiérrez spinning into the gravel trap. Alonso clipped the outside retaining wall and then sailed over the gravel trap. His splintered car ended up on its side against another wall, whereupon Alonso climbed out. Gutiérrez quickly came to check on his fellow driver, and the two walked away unscathed from the harrowing accident.

With debris littering the track, officials displayed the red flag. The field came to pit lane where the cars were stopped, and the only work teams could do to their cars was change tires. Opportunity knocked and Haas F1 Team answered.

After starting the race on the Pirelli P Zero Yellow softs, the team took advantage of the red flag and changed Grosjean’s tires to the Pirelli P Zero White mediums. While the mediums did not have nearly as much grip as the softs, they also did not wear out as fast. When the race went back to green, Grosjean was good to go the distance without pitting. His strategy was to outlast and outrun as many of his counterparts as possible. He succeeded, with only five drivers finishing ahead of him, all of whom belonged to race teams with decades of experience. The sixth-place finish was worth eight points, placing Haas F1 Team fifth in the constructor standings.

“A lot of people have contributed to this, so we have to thank all the people, starting with Guenther Steiner (team principal) who put all this together and kept pushing me to go out and try this. The Ferrari people have been excellent. They’ve helped us a lot. Dallara helped us build the chassis. We’ve got a great sponsor in Haas Automation. It’s all great.

“There’s a new F1 team on the block and it’s an American F1 team, so we’re real proud of that. But these other teams are pretty dang good at what they do. I wouldn’t sit here and say we’re going to be in front of them all the time, but today was a good day.

“Obviously, the chassis, aero, engine – they all work. That’s what’s really important. That’s why we took the extra year to work on that. The car is a very stable platform. We’ve kind of known that since (testing in) Barcelona. There’s been a lot of little gremlins and technical issues, but I think the fundamental chassis will be awesome for us.

“Grosjean had a heck of a challenge there. They made the decision to go on the mediums for 39 laps, so that was really pushing it. He basically didn’t chew up his tires initially, so he was able to get 39 laps out of them. I think near the end he was starting to pick up time on the person behind him. Tire strategy, saving your tires, those are the kinds of things that make a driver a legend.

“Grosjean just drove his heart out and did everything he could to keep it up there and it worked out. When (Nico) Hulkenberg was behind him I thought he might catch him, but he held him off and we actually started to make some time. He was saving fuel near the end, so I think once we got to the last few laps and we started to push a little harder, the car really responded.

“This is racing. It’s what we do for a living and, you know, it’s cool. But I’ll tell you, there’ll be some bad days too, so we’ll enjoy this one."

“A very good day at the office. This feels like a win. For all the guys who worked so hard over the last few weeks, this is unbelievable. We were unlucky yesterday, but got a bit lucky today with the red flag. Still, we were able to hold off the Williams (Valtteri Bottas) and the Force India (Hulkenberg). We didn’t have much set-up (time) on the car. It was a case of, off you go and see what happens. This is an unbelievable feeling. The guys did an amazing job and I told them, this is like a win for all of us. First race and here we are, P6. A happy day.”

“It’s not the race I was hoping for. However, the most important thing is that Fernando and I are both OK. The car was handling well and the results show we can be very competitive. Romain did a great job for the team. To achieve points in our first race is fantastic. I’m now looking ahead and focusing on Bahrain. I can’t wait to get back out racing.”

“First, the good thing is that Esteban and Fernando were not injured. It was unfortunate for our results, but I think a sixth-place finish makes up for it, and I’m sure Esteban will come back strong in Bahrain. Romain and the team did a great job and a big thanks goes to everyone for working so hard in the months leading up to our first race. Yesterday I said I was looking forward to the race, but to finish it in the points is a dream come true. Now we move forward and on to Bahrain.”