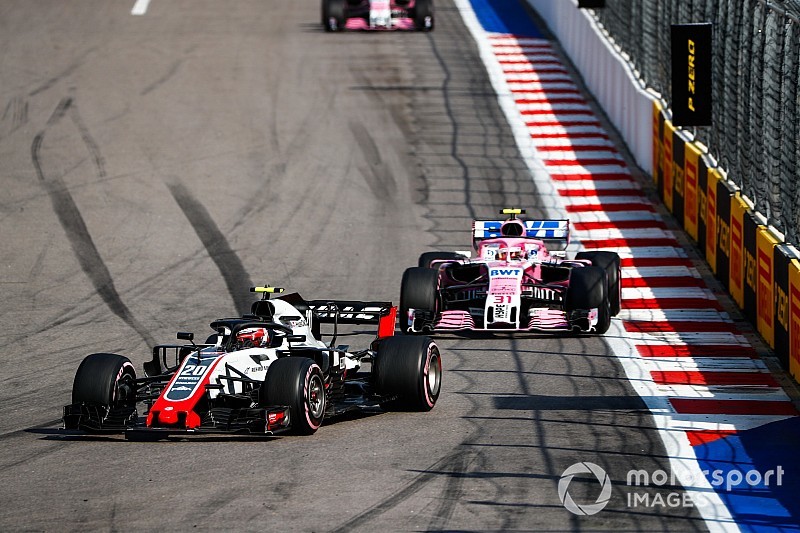 The Haas Formula 1 team has decided not to appeal the Abu Dhabi Grand Prix stewards’ decision to dismiss its protest against Racing Point Force India.

Haas alleged that the new Force India entry, accepted by the FIA at the Belgian Grand Prix after the original entity fell into administration, is not a constructor because it used a design from a different company and team.

The stewards dismissed the protest, asserting that Force India's entry is legal and that the current Racing Point team was allowed to race a car designed by the previous Sahara incarnation.

Haas submitted an intent to appeal that gave it 96 hours to make a final decision on whether it would go ahead fully.

This was to buy some time given the complicated legal nature of the stewards’ decision, which was a lengthy verdict produced mid-race weekend.

Haas has now elected not to appeal the decision.

Though this specific protest was over a sporting matter, the row is a legacy of a dispute of whether the new Force India team should be eligible for prize money.

Haas does not believe the team should be allowed to immediately qualify for ‘Column 1’ payments, which teams need to finish in the top 10 in two of three seasons to be eligible for.

It argues that, as Haas had to wait for those payments after it joined the grid in 2016, the new Force India entry should have to do the same.

Team principal Gunther Steiner explained over the Abu Dhabi weekend that he had received "no answer at all” from the powers-that-be, “so we decided to protest”.

He said Haas is “seeking equality for all the teams” but Force India team boss Otmar Szafnauer hit out at the “irony and hypocrisy” of that claim “when we are the definition of a constructor, and they aren't”.

The two teams first started rowing at the start of the year, when Force India hit out at Haas’s relationship with Ferrari and its use of non-listed parts from Maranello.

In their verdict over the protest, the stewards made it clear that Force India is a “new team” and a “separate and different legal entity”, and therefore “cannot be considered the same team as the former Force India”.

However, it is not known if this could form the basis of any fresh Haas push to stop Force India receiving Column 1 payments or allow the American team to attempt to regain payments it missed in 2016 and 2017.