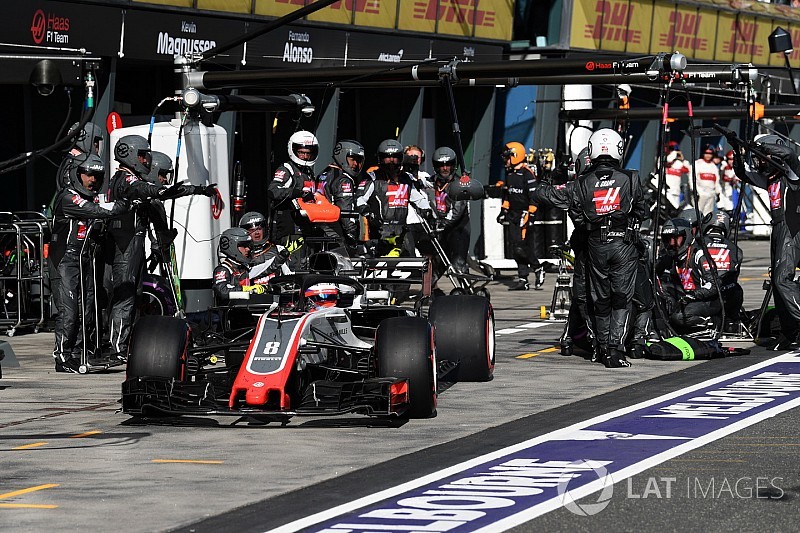 Haas has reshuffled its pit crew and introduced an extra fail-safe system to help prevent a repeat of its Australian Grand Prix tyre change blunders.

The American-owned team saw a decent points haul in Melbourne slip from its grasp after botched pitstops for both Kevin Magnussen and Romain Grosjean.

While the team blamed the issues on a lack of practice ahead of the Formula 1 season opener, it has made changes to its procedures from this weekend’s race in Bahrain to try to ensure there is no repeat in the future.

As well as moving one of the Melbourne wheelgun men to a new position, an extra person will be assigned to act as a secondary fail-safe to override its automatic release system should an unexpected problem crop up.

Team principal Gunther Steiner said: “We swapped a few positions, and the main reason is not because they did the mistake, but getting their confidence back.

“If you keep on doing the same and the guys are not confident, the risk that you have a mistake again is high, so we swapped positions.

Regarding the extra fail-safe system, Steiner said this team member would be in contact with the drivers to tell them to stop if a problem is detected in the release phase that has not been spotted at the time the car moves away.

“We put an additional person in, so that if it isn’t caught we can stop the car, push it back and put it right,” he said.

Steiner also said that the team would be going back to the levels of pit stop practice that it conducted last year – having not put enough effort in in Australia.

“We’re just putting in as much as possible – as long as the guys you can see they are physically comfortable to do it,” he said. “As soon as they get tired you don’t learn anything – except you wear them out.

“It’s for the team manager to decide when that point is reached. But we are going back to do it like we did last year, which we didn’t do in Australia.”