Haas says Renault should be "a lot better" 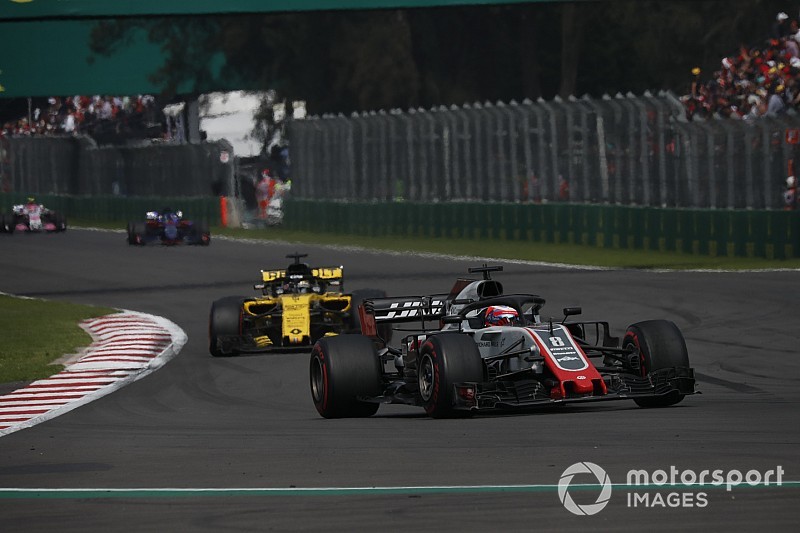 Haas Formula 1 boss Gunther Steiner believes Renault should be "a lot better" than fighting with the young American team this season.

Last week Haas lost its appeal against Romain Grosjean's disqualification from the Italian Grand Prix, which was triggered by a protest from Renault, its rival for fourth place in the constructors' championship.

The Italian GP result briefly lifted Haas above Renault but the DSQ knocked the American team back, while strong results for Renault across F1's United States-Mexico double-header has put the French manufacturer in a commanding position with two races to go.

Steiner has previously referred to Renault's protest as "a bit desperate" and the tension between the two teams remains, with Haas now 30 points behind.

"We're in our third season, we are fifth, we are fighting with Renault which should be a lot better," said Steiner.

"It shows how desperate they are because they are a works team, they have five times as many people as us and they are fighting with us.

"For us it's an honour. We know F1 is a very difficult place to race. It's not all about racing.

"Our team is doing a good job and therefore we're fighting for fourth. It's very difficult now [to finish fourth], but maybe miracles happen."

Check out our liveblog:

Fifth will still represent the best result in Haas's three seasons in F1, having finished eighth in 2016 and 2017.

Renault rejoined the F1 grid at the same time Haas entered F1, and was outscored by Haas in the first year before rising to sixth last season.

Steiner said his team would not dwell on losing its appeal, which would have left Haas only 20 points behind had it been successful.

"Next time we will make sure that what we do stands up in front of everything," said Steiner. "We move on. We're not dwelling on it. It's done and dusted and we go racing again."

Communication with the FIA played a key role in the confusion that led to Haas running an illegal floor design.

Steiner said he is "OK" with how the FIA operates in that regard but said it could still be improved.

"It's never good enough, nothing is good enough in my opinion – I wouldn't say 'You're fantastic, FIA' but I think they try to do a decent job," he said.

Grosjean and Kevin Magnussen have enjoyed high peaks this year but the team has also blanked in eight of the 19 grands prix, including the previous two events.

"I would rather have a weekend where we can show how good we are, like most of the season," said Steiner of his hopes for this week's Brazilian GP.

"If we can get into Q3 and get back to where we were before, I would be happy with that."

The verdict on F1's definitive 2019 regulations

Ocon turned down chance to race outside F1 in 2019