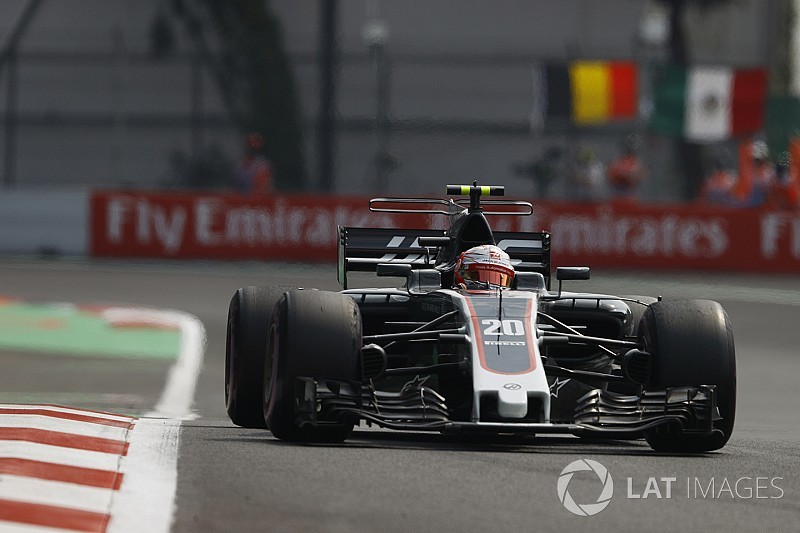 Haas boss Gunther Steiner says Kevin Magnussen delivered the "perfect" drive in the Mexican Grand Prix in bringing home an eighth-place finish on a weekend the team had been braced for the worst.

A lack of performance left Magnussen and teammate Romain Grosjean slowest of all in qualifying, and with little prospect of being able to move up the order.

But grid penalties from other drivers moved the duo nearer the front and then a brilliant first lap from Magnussen catapulted him into the points – which he held on to valiantly despite late pressure from Fernando Alonso and Lewis Hamilton.

Asked how he would score Magnussen's drive, Steiner said: "Ten out of 10. He couldn't do any more, with our car, to keep Hamilton and Alonso behind. That is the highlight of it, but all race he didn't put a foot wrong.

"We didn't luck into it, we earned it, we were in the right place at the right time obviously. But if the opportunity is given he could go the speed… his times were very respectable so it wasn't like we got lucky. It was a fantastic drive."

Steiner said Magnussen's commitment in the race showed why it was important never to give up in F1, even when it looks like all hope is lost.

"No one gave up and you saw that today - starting with the driver which didn't give up," he said. "If you go to the start of an F1 race as a beaten man, you will never get points.

"I think we got an opportunity given to us and we took it. He did a fantastic job. You can't do much better than that.

"The car was a little bit better in the race than in qualifying - obviously because we were last in qualifying!"

Magnussen said his eighth place finish came as a surprise after the Haas duo were slowest in qualifying.

"You can hope all you want but nobody would expect that," the Dane told Motorsport.com. "We didn't have the pace and we qualified last.

"I had a decent start, and a good first lap, and then good pace compared to qualifying. I was in that position the whole race, I knew that one Ferrari and one Mercedes were behind me and they were going to get back but eventually only the Ferrari came back.

"A day like today shows what the team is made of, showing that no one gave up after yesterday, which was a tough day for everyone. It was a brilliant team effort."

Asked about keeping Hamilton behind he said: "I didn't care who he was, I was just happy to be in the points."

Analysis: Formula 1 at "a crossroads" over future direction