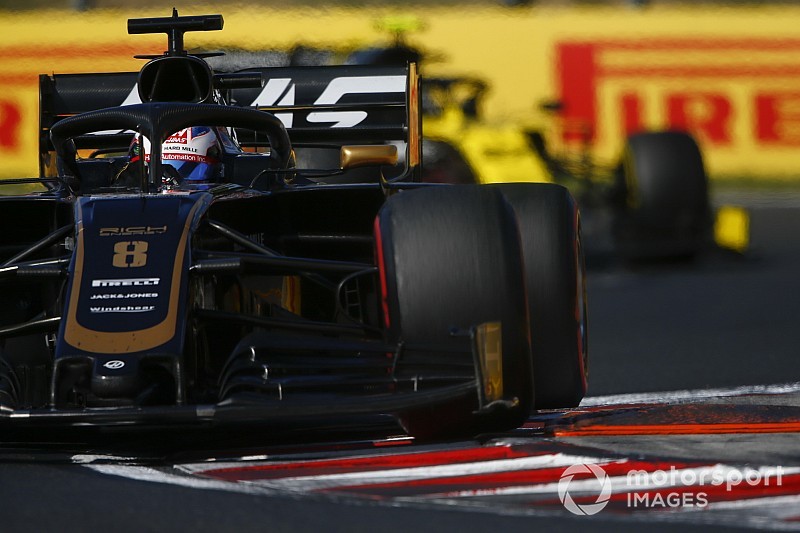 Haas will end its split-specification experiment at the Belgian Grand Prix, where both of its Formula 1 cars will run refined upgrade packages.

Splitting the aero packages across the two cars had begun at the British GP, where Romain Grosjean returned to the set-up he started the season with and Kevin Magnussen continued with an upgrade package introduced in Spain.

Magnussen then gave the team's latest spec its debut in Germany and ran those parts again in Hungary, while Grosjean continued with the initial design.

For this weekend's race at Spa, Haas will commit both cars to a "refinement" of the upgraded spec Magnussen used before the summer break.

Grosjean had been expected to move away from his Australia-spec package for the upcoming races in Belgium and Italy because the circuits requires low-downforce packages, and Haas's versions of these were being tailored to its updates.

"For Spa we will go with the upgraded car, which we ran at Hockenheim," said team principal Gunther Steiner. "We've learned quite a bit out of it and tried to improve the car by changing some of the components.

"Both cars will be the same spec, and hopefully we can still learn more about it."

Haas's troubles this season have been rooted in the 2019 Pirelli tyres, although unlike other teams struggling in this area Haas's problem has been its race pace rather than one-lap performance.

Pirelli is seeking to widen the working range of its tyres next year, which Steiner has previously said gives Haas confidence it does not need to drastically change its car design.

Steiner has now confirmed that the team's design focus has "partly" switched to the 2020 car although he has not ruled out further updates for this season.

"We need to see what we can come up with in the wind tunnel, with the small developments we do there for the 2019 car, and if we bring any upgrade kits," he said. "We don't know yet."

Haas's difficult first half of the season means it is only ninth in the constructors' championship, but lies 17 points adrift of fifth-placed Toro Rosso in a tight midfield battle.

Grosjean said: "We're going to do our best but on paper things are a bit more complicated than they were last year.

"With a good summer break and a good understanding of our issues, we could be back on target for a really good points finish, just like Austria last year where we scored 22 points in one event."

Honda admits gap to leading F1 engines is "still there"