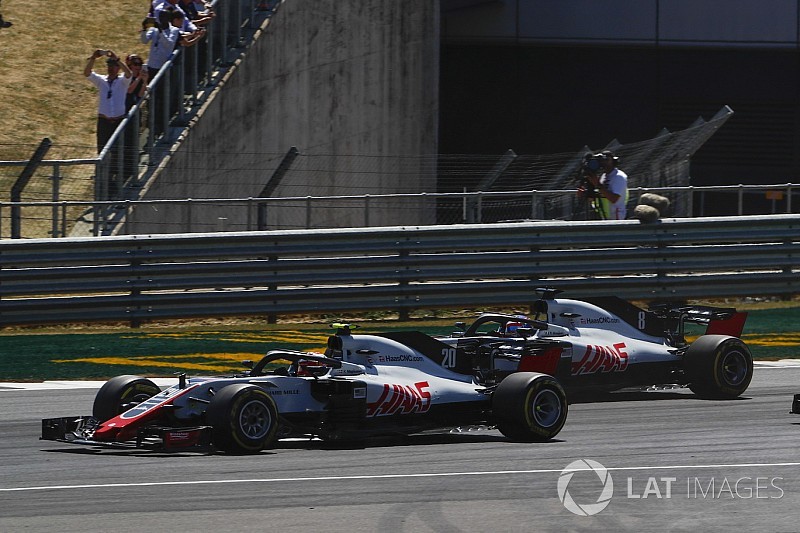 Haas Formula 1 boss Gunther Steiner says the team must stop throwing away points after Romain Grosjean collided with Kevin Magnussen on the opening lap at Silverstone.

The two Haas drivers came to blows at the start of the British Grand Prix as Grosjean made contact with Magnussen at Abbey, dropping both well down the field and leaving the latter with floor damage that compromised the rest of his race.

Helped by two safety car periods, Magnussen recovered to finish ninth, while Grosjean subsequently retired after making contact with the Renault of Carlos Sainz at Copse.

Steiner said Haas had the pace to finish best of the rest behind the top three teams – which would have meant sixth and seventh places – but instead was left with only two points as a result of the first-lap contact.

Renault, which Haas is chasing in the battle for fourth in the standings, managed to score eight points by virtue of Nico Hulkenberg’s sixth-place finish.

“I’m not happy,” said Steiner about his two drivers clashing. “[These things] can happen, but they shouldn’t happen. We need to be better than that, that’s the conclusion. We need to stop losing points.

“Today the guys behind us [in the constructors’ championship] closed up and the guys ahead got further away.

“It’s just always hard work, we should be putting our hard work into scoring points instead of getting up again.

“We should be up and trying to hit high but we are using a lot of energy just to get out of the dumps – always chasing, instead of trying to move ahead.”

The clash comes after Grosjean’s breakthrough fourth-place finish in the Austrian GP, which ended a long point-less run for the Frenchman.

Steiner said he remains supportive of Grosjean but admitted the “tipping point” of patience with him may not be too far away.

“I need to be [supportive of Grosjean] because we want to succeed as a team,” he said.

“I don’t know where the tipping point is, I’m not there yet, but at some stage we need to stop losing points.

“We cannot keep on doing this, we are now through half of season and we’ve lost a lot of points because of our own mistakes and that is actually not acceptable.”

Steiner was more reserved about the incident that ended Grosjean’s race, apportioning some of the blame on Sainz – who attempted to go around the outside at Copse.

“I don’t want to jump to conclusions, but I think it’s also Carlos’ fault,” he said. “He’s gone by already and he was closing [towards the inside line].

“I don’t know exactly who did what, I didn’t see the [overhead] view. I just saw the two in-car [cameras], I don’t want to jump to conclusions on that one.”

Inside Line F1 Podcast: Points For Everyone? No, please!