Haas is still chasing an answer on whether a floor upgrade it delivered at the Belgian Grand Prix is better than its older version.

Despite a double points scoring finish in Belgium, it still does not know if the floor tweaks it trialled were a success.

And, with the team locked in an increasingly tight fight with Renault for fourth in the constructors' championship, with just six points now separating them, finding an answer on the upgrade is essential to help its cause.

After a difficult Friday practice in Belgium, Romain Grosjean reverted to the older version for qualifying and the race, while Kevin Magnussen stuck with the new parts.

Although Grosjean qualified and finished ahead, team boss Gunther Steiner said that there had been no clues from either driver feedback or car data to pinpoint which version was better.

Asked if the race pace had delivered an answer, Steiner said: "No. We need to look at the data. I think none of the two is wrong. We have to see which gives us the better data, but we haven't done that yet."

Haas is hoping it can find the answer imminently, with the next race taking place in Italy this weekend.

With Renault struggling for straightline speed and Haas's Ferrari engine setting the benchmark in F1, this weekend's Italian Grand Prix will deliver a good chance in the American-owned team's fight with Renault.

Asked by Motorsport.com if he felt Monza was a good opportunity, Steiner said: "I know it is an opportunity, I don't know if it is a good one. I tell you that one after Monza!

"There are a lot of things to be done until we do it, but for sure we try as I always say. Renault, they are a good team. They will fight for it. They will not hand us over the fourth position.

"They had a downer here [in Spa] like we will have a downer until we get to the end of the season, so they could be strong at Monza like they are normally are. So it will be a harder battle.

"But I don't know how Monza is for us. You just know your own car with low downforce, I don't know what the other ones cooked up for there. We will see on Saturday."

The Haas updates in detail 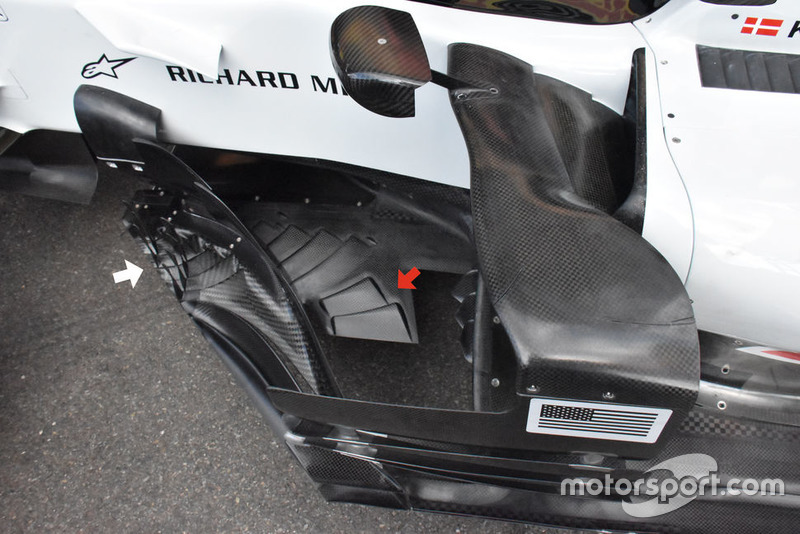 The Haas updates were focused around a new floor, which featured changes in numerous places that all work together to form a more cohesive unit.

This daisy chain effect started on the bargeboard's footplate, where the slots which cut into their surface were reorientated (white arrow). 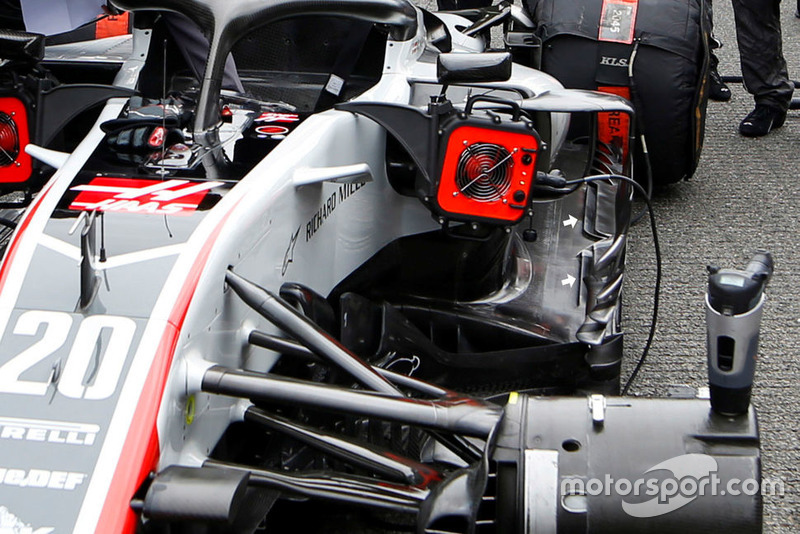 Meanwhile, on the edge of the floor the team added two elongated floor gills, much like we've seen deployed elsewhere up and down the grid in the opening part of the season. 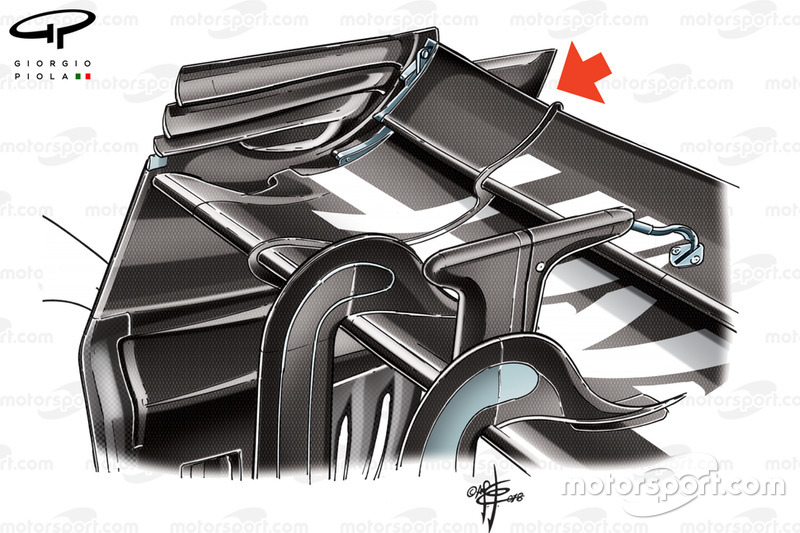 The Belgian GP was not just the chance to introduce general car updates, because Haas had to focus some of its development programme on track-specific elements too.

The disparate requirement of low drag for sector one and high downforce for sector two and three at Spa-Francorchamps mean that compromise must be sought, with most teams often bringing wings that try to cater for both options.

In the case of Haas this came in the form a bow-tie shaped wing, with a more slender central section (for downforce and drag reduction) and broader outer section (for balance and downforce).

This was in contrast to the rest of the grid, which pursued 'spoon' shaped rear wings for this scenario. The move suggested Haas felt that overall car balance was more important than out-and-out straightline speed.