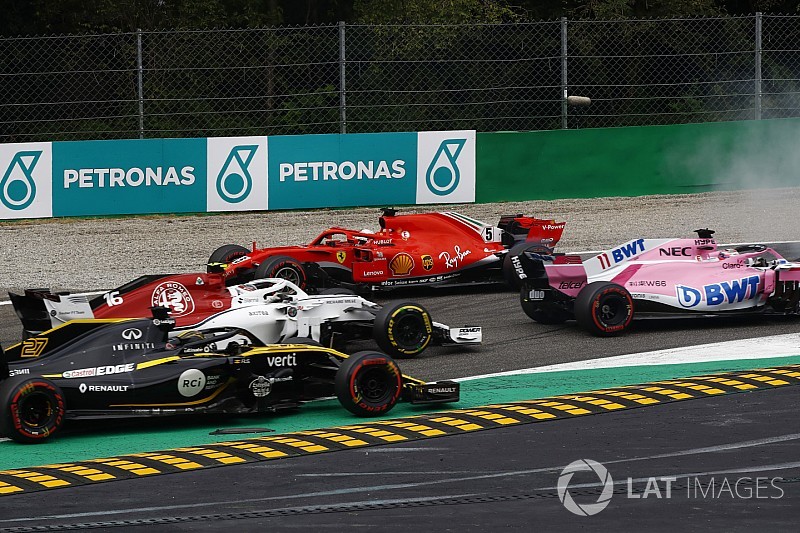 Lewis Hamilton is adamant that he left “enough space” in making the move that resulted in his Formula 1 title rival Sebastian Vettel spinning on the opening lap at Monza.

Hamilton qualified behind the Ferrari pair of Kimi Raikkonen and Vettel, and remained in third place after going through the first chicane.

But with Vettel boxed in behind Raikkonen on entry into Variante della Roggia, Hamilton moved ahead on the outside line.

The pair clashed exiting the first part of the chicane, and Vettel spun, leaving Hamilton free to attack Raikkonen and eventually win the race.

Vettel, who finished the Italian Grand Prix in fifth and now trails Hamilton by 30 points, laid the blame on Hamilton for the incident after the race – but the Mercedes driver was confident he had done nothing wrong.

“I think we all got to similar starts and I got wheelspin and went to Turn 1, and I was surprised that Seb went to the left.

"We got to Turn 1 and there was a small touch between us all and powering down to [Turn] 4, again a bit surprised Seb chose the inside and not going to the outside of Kimi.

"And that was my opportunity, I stuck it down the outside and made sure I was far enough alongside, I had the experience a few years ago of being on the inside and it didn’t come off too well.

“I think there was enough space between us. I am guessing he locked up, we touched, it was a brief moment, damaged the car a little bit but I could continue.

“The rear moved around a lot [after that], which made it a little bit more difficult but not impossible.”

Ferrari led Mercedes in every practice session and qualifying segment this weekend, and Hamilton admitted he did not see himself winning the race.

“I definitely didn’t expect it,” Hamilton said. “I started third on the grid, looking at pace of last race and pace here, I didn’t know where we would be here.

“I was to stay within 1.5 [seconds], I thought 'this will be a serious uphill battle', and throughout the weekend there was so much pressure on us all to deliver, a lot of pressure from team, sponsors and myself.

“I never expected to win but I prayed. I went in with a clear goal, but you never know – sometimes they pulled away like the last race [at Spa].”

Hamilton said he was wary of taking too much risk in passing Raikkonen, as his title battle against Vettel was the priority.

“Yesterday I was trying to figure out how aggressive you can be because my race is not with Kimi, it is with Sebastian.

“I was trying to get past Kimi at the same time. I was just telling him he did a fantastic race, he drove incredibly fairly and I respect him so much. I really enjoyed racing with him.

“But, yeah, getting past Seb at the beginning was clearly a massive turning point.”