The Vodafone McLaren Mercedes Formula One team has been working on their latest creation since September 2007. Now it has been revealed it to the world at the Formula 1 team's headquarters in Woking, England. Lewis Hamilton and Heikki ...

The Vodafone McLaren Mercedes Formula One team has been working on their latest creation since September 2007. Now it has been revealed it to the world at the Formula 1 team's headquarters in Woking, England. 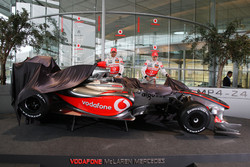 Formula One World Champion Lewis Hamilton and teammate Heikki Kovalainen had the honor of uncovering Vodafone McLaren Mercedes new baby for the 2009 F1 season. The new car, called the MP4-24 takes up the mantle from its highly successful predecessor the MP4-23 and the aims are clear, to win the drivers and constructors titles.

"The arrival of a new car is always an emotional moment for any racing driver - and the unveiling of MP4-24 is even more special for me, not only because the car looks absolutely stunning but also because it carries the world champion's number one," Hamilton smiled at the unveiling.

McLaren Group Chairman & CEO Ron Dennis commented, "Last year was immensely satisfying for everybody at Vodafone McLaren Mercedes, but our intense focus ahead of '09 gave us little time for celebration.

"The regulatory changes have only increased our ambition to remain at the competitive vanguard and, for this year, our target is clear: to win both world championships if possible. Lofty aims, I grant you, but we exist to win."

The McLaren is a striking car and looks to contain more of the developments we can expect to see on the full race car, although Chief Engineer of the MP4-24, Pat Fry, indicated that there is much still to be added. "We are still bringing so much performance to the car, and the fact that the car you see before you today will bear little resemblance to the one that races in Melbourne," he said.

The car at the launch is actually the second chassis produced by the team, the first is already at the testing track in Portugal ready for the attention of test driver Pedro de la Rosa, demonstrating at least, the early beginnings of the project which has given McLaren a positive start.

The car itself carries a more complex front wing with a two-section flap on the side. The narrow drooping nose cone sports winglets on the sides but no vanes on its underside in the wheel area but it has a large floor level scoop extruding from under the cockpit area. The side pods are a divergence from the designs seen to date with McLaren opting for a straighter profile compared to the heavily undercut designs from Ferrari and Toyota. 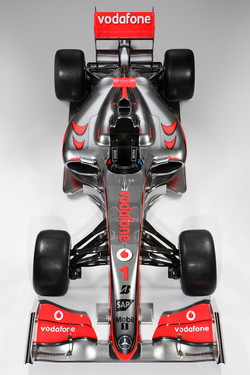 The side pods are also positioned further forward as compared to the Ferrari design, more like the Toyota. This will give the MP4-24 more space to accommodate cooling radiators and the KERS battery system, although the floor still extends forwards of the side pods and to the rear of the car back to the wheels. The air scoop for the engine on the upper bodywork features a similar undercut design to the 2008 car and the small narrow rear wing contains similar slotted end plates.

Beauty is said to be in the eye of the beholder, and Hamilton is clearly quite taken with his new steed, commenting at the launch he stated, "Well, obviously, I haven't driven it yet. But there's an old saying in motor racing that says a beautiful car often turns out to be a quick car. And all I can say is that I hope that's right, because I reckon the MP4-24 looks simply sensational. Really beautiful, in fact."

In recent years the cars had been sprouting all sorts of horns, wings and slits on every available surface and the cars as seen in launch trim under the new regulations do look less cluttered, at least at this stage.

The engine development freeze means that the McLaren keeps the same powerplant that served them so well last year in terms of performance and reliability, with just the maximum engine revs reduced from 19000rpm to 18000rpm. The KERS in the McLaren already has two years' development behind it and now the team can concentrate on optimizing its integration into the chassis, all positive stuff for the Woking outfit.

Martin Whitmarsh, who will be stepping up to take over the team principal role just before the start of the racing season, was pleased with the efforts by everyone at the state of the art technical centre. "The new regulations for 2009 are the biggest changes to Formula 1 for many, many years and are expected to significantly affect every team's competitive parameters," he said. 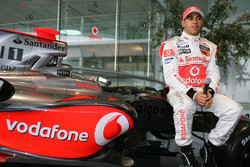 "As such, this year's world championship could well be won through strength in depth, resourcefulness and sheer ingenuity. And the reality is that we feel very well-equipped to fight in every single one of those areas."

Kovalainen was just as excited about the unveiling today as his teammate. The Finn commented: "I'm fortunate enough to have watched behind the scenes as this year's car has taken shape and I've been amazed at just how hard everybody in Woking. Brixworth and Stuttgart has worked. Over the winter, I also feel like I've had the opportunity to prepare fully for the year ahead: I've been busy training and working with my engineers to ensure we start the season as strongly as possible. With so many new rules, adapting quickly will be essential and I feel more prepared than ever for the new season."

The McLaren MP4-24 has had a well resourced and lengthy development process, from a team who have a proven track record They are aiming for both titles this year and with a further years experience gained by both drivers they may just do it.