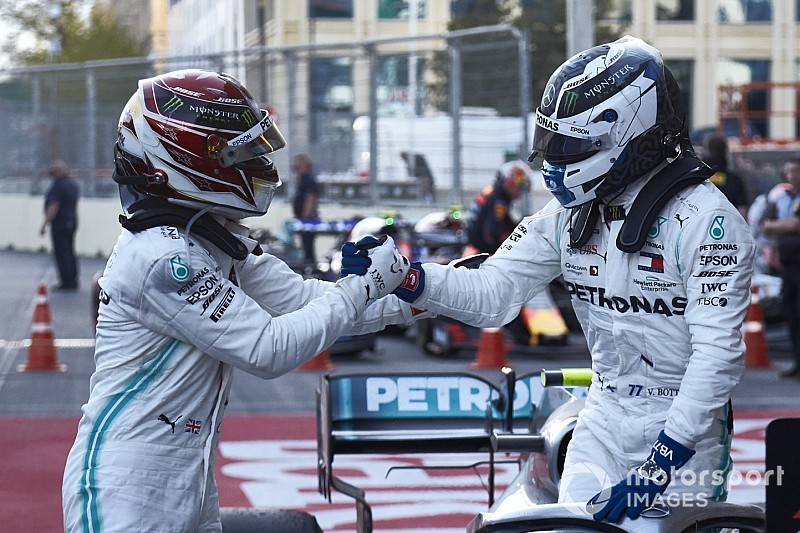 Lewis Hamilton expects the "respect" he and Mercedes Formula 1 teammate Valtteri Bottas have will prevent a repeat of the fallout he believes Nico Rosberg triggered in 2016.

Bottas leads the championship after winning two of the first four races, a scenario that led team boss Toto Wolff to admit to seeing a glimpse of the battles between Hamilton and Rosberg from 2014 to 2016.

Hamilton clashed several times with Rosberg on track and off it during their exclusive fights for the world championship.

However, Hamilton has enjoyed a much more constructive relationship with Bottas, who has not yet mounted a full-season challenge since replacing Rosberg in 2017.

Asked why he is confident of avoiding the flashpoints between himself and Rosberg, Hamilton said: "There's things that happen in the background that you won't know about. I don't feel it's the place to really talk about it.

"When he [Wolff] mentions glimpses of that, he has seen a glimpse of it. What's really important is we pull together as a team. We've discussed it and hopefully rectified it and it won't spring up again.

"Whereas what happened before, an individual [Rosberg, in 2016] just continued to go down that route. But that's not what we have here. We have a really great energy within the team. The respect is there. We have an agreed rule set out so we do finish the races one-two. We play supporting roles either way."

Hamilton has hinted in the past that the details behind the detonation of his relationship with Rosberg would remain private until he decided to write a book once retired.

Ahead of this weekend's Spanish Grand Prix, he said he didn't "need to talk about it".

"It's all internal, we keep everything internal, and it's not for the public domain," Hamilton said. "As I said everything is great within the team and the respect is still there. We continue to push on and won't have problems as we continue. Don't expect what you've seen in the past."

Hamilton and Bottas have produced four one-two finishes for Mercedes at the start of the 2019 season.

Bottas leads the championship by one point after winning the previous race in Azerbaijan, where he toughed it out against Hamilton through the first two corners.

"It will always be respectful," said Hamilton, who admitted he could have raced more selfishly against Bottas in Baku. Ultimately the core goal is for the team to finish at the top and I'm a team player.

"We're not going to be touch, that's for sure. The five-time world champion said that fights between himself and Bottas would involve "tensions" but that did not have to cause issues.

The fundamental key is we have to be a team player," said Hamilton. "We're not here for ourselves. What we're paid to do is win for the team and deliver for the team. As long as we remember that, we shouldn't have problems."