Hamilton says he will change the way he races after Monza 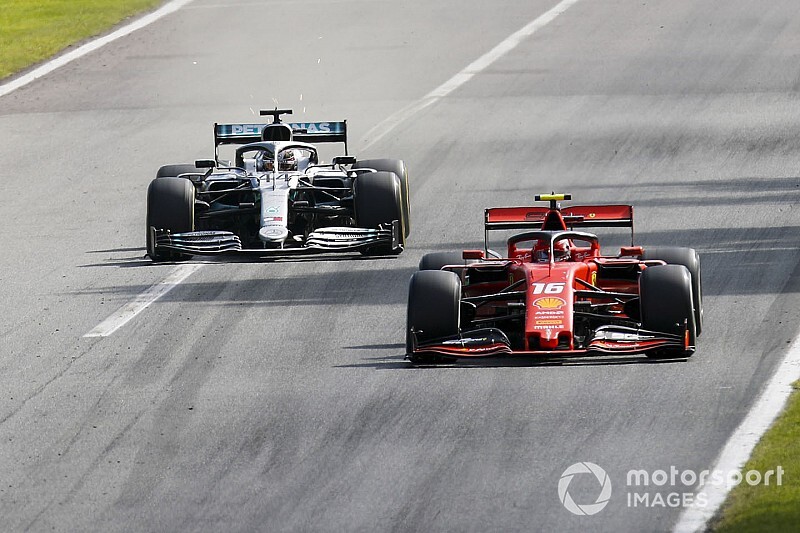 Lewis Hamilton will change the way he races and interprets what is acceptable in battle as long as Formula 1's rulemakers stand by new precedents being set.

Hamilton was unable to pass Charles Leclerc in the Italian Grand Prix, during which he complained about not being left a car's width while battling with the Ferrari driver and suggested his rival was being "dangerous" after another move.

Drivers have received more leniency since the Austrian Grand Prix, a race in which Leclerc lost victory after being bumped wide by Max Verstappen, as officials seek to allow harder racing to take place without penalties.

Leclerc said he learned from that experience and knew he could be more aggressive while battling Hamilton as a result, whereas last Sunday's battle was Hamilton's time in a wheel-to-wheel fight since officiating became less strict.

Hamilton suggested in the post-race press conference at Monza that the stewards were not being consistent, but when pushed later on what his issue was by Motorsport.com he clarified he wanted to know exactly what was acceptable.

"I don't think there's an issue, if that's how we're able to race then I'll race like it," he said. "As long as we know you're allowed to not leave a car's width, and you don't have to do that now.

"As long as you're not contradicting us, as long as we've got a clear message, that we're allowed to run wide if someone's there and you only get a warning flag.

"Then you only need that once to potentially keep the guy behind you. As long as it's clear, and that's the way going forwards, then it's fine.

"It's just so I know how to go into battle, same for all the drivers."

The FIA has worked with teams to review various incidents from this season and earlier, to establish how it can enforce the rules without being draconian.

It is hoped this will allow more so-called racing incidents to pass without a penalty having to be applied, and one example of this being enforced is the revival of the black/white warning flag.

Leclerc received one of these for moving under braking at the Roggia chicane, where Hamilton ended up being forced onto the run-off.

Hamilton stressed there was "absolutely zero issue" with Leclerc and all he would be interested in should the two drivers speak about their Monza fight would be to establish
Leclerc is "cool" if the positions end up reversed and Hamilton drives in that manner.

"If that's cool, that's how we race," he said. "You're supposed to leave a gap, and now I don't know if that's the case because that's unsure with the rules.

"It's good we're able to race hard. It was a tough battle and that's good."