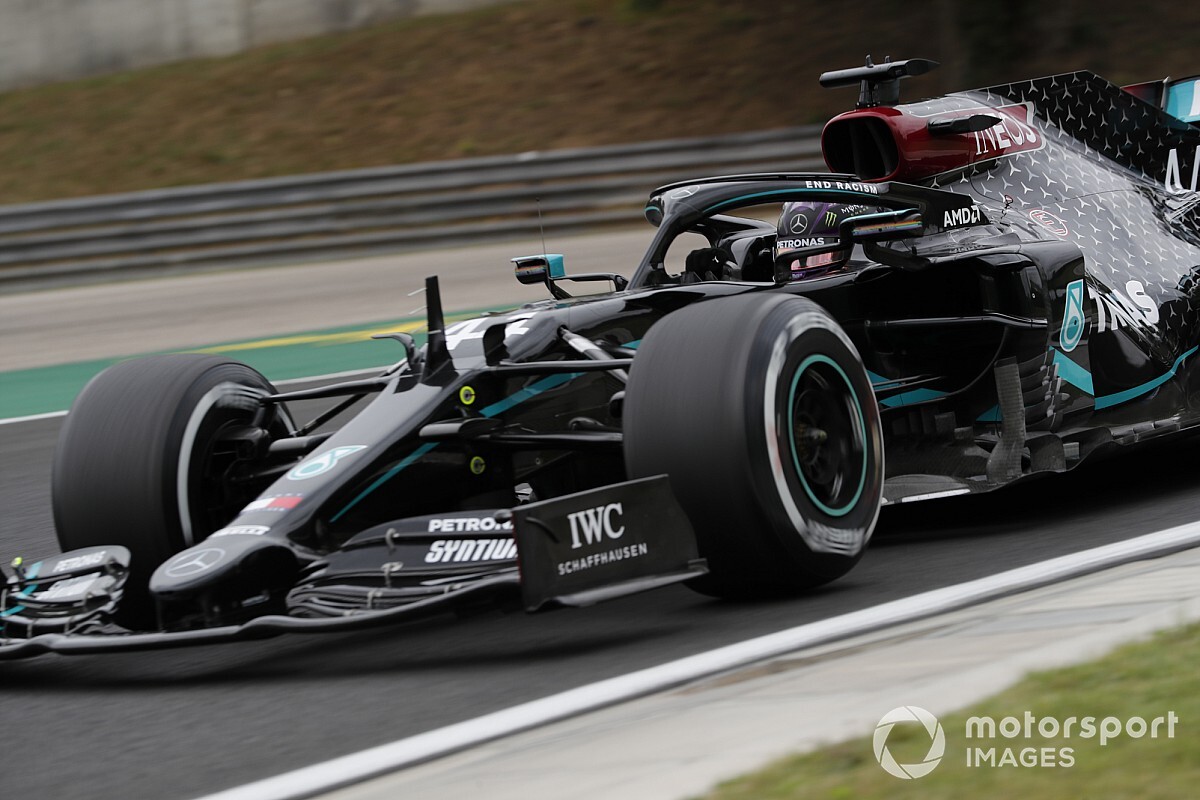 Lewis Hamilton has downplayed Mercedes’ Friday advantage in Hungary, saying he expects the rest of the Formula 1 field to draw “a lot closer” come qualifying.

Hamilton dominated proceedings in the only dry running of the day in first practice, setting the fastest time of the session on the hard compound tyre.

He edged out Mercedes teammate Valtteri Bottas by 0.086 seconds despite the Finn lapping on the faster medium tyre, while the Racing Point cars of Sergio Perez and Lance Stroll set their times on softs in third and fourth.

Red Bull had been talked up as Mercedes’ primary rival in Hungary, only for Max Verstappen to finish 1.4 seconds off the pace in eighth place, with teammate Alexander Albon down in 13th.

A wet FP2 saw Hamilton opt against posting a lap time as Sebastian Vettel headed the field for Ferrari.

Hamilton moved to talk down Mercedes’ pace advantage after Friday, though, saying it was hard to read into what each team was doing in their FP1 programmes.

“I don’t take too much from it,” Hamilton said.

“Everyone is doing something different, a different programme out there in terms of wing and fuel and engine and all these kind of things.

“We got through what we needed to get through. It was going OK.

“I think it’s going to be a lot closer when we get to P3 and qualifying, but yeah, the car, there was some work to do to it, so we did some work.

“Then it rained, and we won’t know until we get another dry session.”

The forecast for Saturday suggests FP3 could be affected by rain, with the possibility of showers extending into qualifying.

Hamilton produced a stunning performance to take pole in the wet in Austria last weekend by over 1.2 seconds, with some already talking it up as one of the greatest qualifying laps in F1 history.

But Hamilton doubted he would be able to produce a similar display should the rain return for Saturday’s qualifying, saying the Hungaroring was far trickier to drive in the damp compared to the Red Bull Ring.

“No car is perfect, and no driver is perfect. What we do is just try to continue to build on that solid foundation that we have,” Hamilton said.

“It is a great car, but we still are learning about it. We’re still trying to understand the small nuances and the changes we can make to just continue to build.

“It was great in the rain in Austria. It’s a little bit different here, it’s higher downforce, but the track seems to be a lot slipperier.

“If it is a wet qualifying, it’s not going to be like last week. However, who knows? Maybe I’ll do a decent job again. We’ll see.”

Verstappen has "a lot of work to do" after practice