Hamilton planned to "crash or finish" in "hardest" race 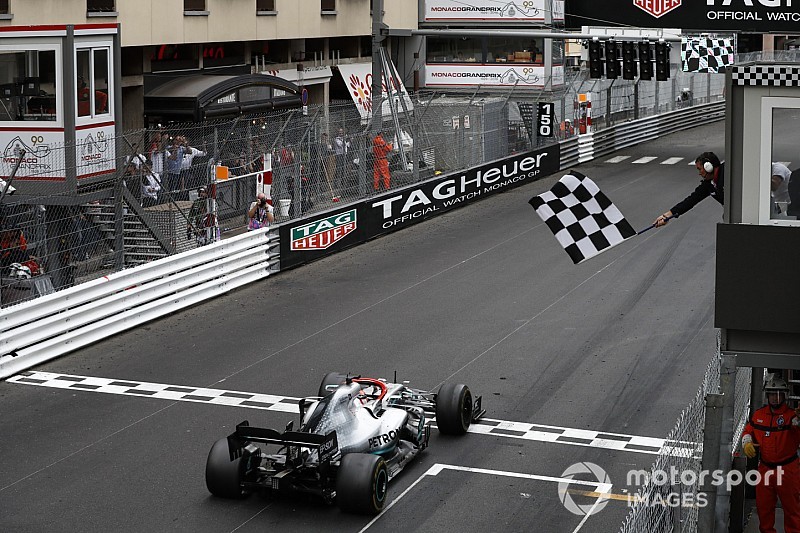 Monaco Grand Prix winner Lewis Hamilton says he was going to "crash or finish" nursing his severely worn tyres in the race, which he described as "the hardest I have had".

Hamilton led the way from pole but was forced into an early stop by a safety car for debris left by Charles Leclerc's accident at La Rascasse.

The reigning champion was equipped with medium tyres during his sole pitstop, which committed him to a 67-lap stint on the C4 compound – while his rivals behind had taken on fresh sets of hard rubber.

Hamilton began to struggle with his tyres well before the end of the race, taking care of a very worn front-left tyre as he fought off Max Verstappen's attacks until the chequered flag.

But while he repeatedly expressed his discontent and worry over the strategy to his Mercedes team over the radio, and labelled the tyres as “dead” at one point, Hamilton confirmed after the race that he never entertained a second pitstop – having lost a Monaco win to then-teammate Nico Rosberg due to an extra pitstop in 2015.

“I was never going to come in. A few years ago I was in the lead and then I’ve come in and learned the hard way as I lost the race,” Hamilton recalled.

“I wasn’t going to come in. I was going to crash or finish. I was driving around on nothing, you can see how much understeer I had, the car wasn’t turning.

“Ultimately it was the wrong tyre. Nonetheless this team has done an incredible job, what we have achieved in these first six races is remarkable.”

Hamilton said the drive for his 77th Formula 1 win was as difficult as any he could remember, while dedicating the victory to the late Mercedes non-executive chairman and F1 legend Niki Lauda.

“Definitely for me the hardest race I think I have had - nonetheless I really was fighting with the spirit of Niki [within me].

“Niki has been such an influential person in our team, helping us to get where we are, so I take my hat off today.

“I was trying to stay focused and trying to make him proud. We truly miss him.”

Verstappen attempted a late lunge down the inside of Hamilton at the chicane with two laps left to run, with the pair having what Hamilton described as “a light touch”.

The incident was investigated by the stewards, but neither driver was summoned and a verdict of 'no further action' was soon confirmed.

“It was close, a bit of a late dive, luckily I saw him last-minute," Hamilton said of Verstappen.

“But he wasn’t really... I think his front wing was alongside my rear wheel, so he wasn’t fully past.”