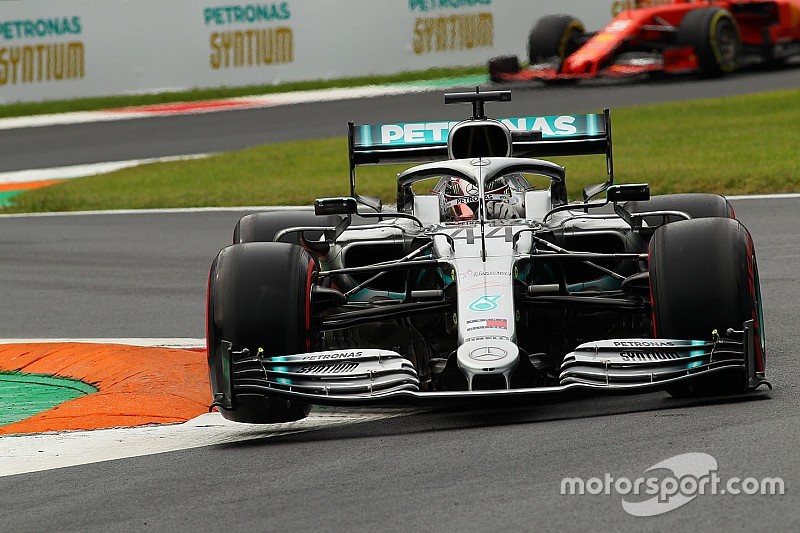 Lewis Hamilton says he wants the intense battles for wins in recent Formula 1 races to continue so his Mercedes team is regularly challenged by Ferrari and Red Bull.

Hamilton has amassed a healthy points lead in the championship because of Mercedes' strong start to the season but his team has come under increasing threat in the last few grands prix.

Ferrari driver Charles Leclerc has claimed back-to-back wins in Belgium and Italy as the high-speed circuits there played to the strengths of his team's inconsistent 2019 car.

Prior to the summer break, Hamilton had to overcome Red Bull's Max Verstappen to win in Hungary, while Verstappen won two of the three grands prix prior to that race.

Asked if the next few races will favour him and Mercedes after two 'Ferrari circuits', Hamilton said: "I'm not thinking that way. I'm not looking to the next race thinking it's going to swing our way.

"I'll go to the factory next week and go through the same process, hoping we can improve our car and improve our method on a weekend and do a better job.

"I hope it's competitive between us and the Red Bulls and the Ferraris in the next race. I personally want this battle to continue. More opportunities like that would be great."

Mercedes has enjoyed stronger performance at slow-speed circuits this year than Ferrari, although Red Bull's challenge at such venues has improved through the season.

Next week's Singapore Grand Prix should be better suited to Mercedes and Red Bull, and Hamilton's teammate Valtteri Bottas is particularly encouraged by how close Mercedes was to Ferrari even at the power-sensitive Spa and Monza.

"Singapore on paper is better than us compared to Ferrari," said Bottas. "And we're very close to them [at Monza].

"So it should be good. We have to see, it's a special track, very hot conditions, unique in what it needs mechanically from the car.

Gamer Gasly wants to get more involved in sim racing