Hamilton: FP2 "like sitting in headmaster's office" after crash

Mercedes Formula 1 driver Lewis Hamilton has described his Canadian Grand Prix practice crash as an "innocent mistake", which left him feeling like he was "in the headmaster's office". 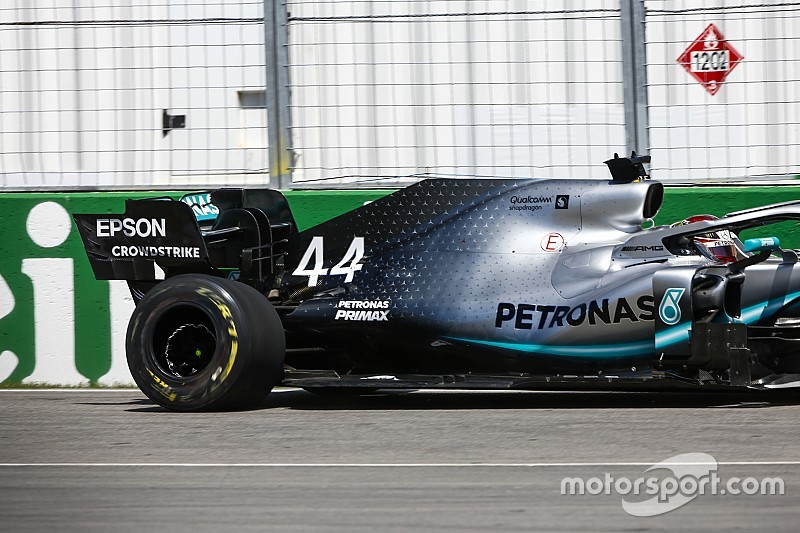 Hamilton, who had set the pace in the opening Friday practice from Valtteri Bottas, lost control of his W10 on exit of Turn 9 when running the medium tyre early on in FP2.

He slid off into the outside wall, making contact with his right-rear tyre - and while he then successfully brought his W10 back to the pits despite the damage, Mercedes was forced to change the rear suspension and he did not return for the rest of the session.

"The boys tried really hard to fix it, but there wasn’t enough time," Hamilton said.

"I don’t remember the last time I missed a whole session before. It’s definitely not great to watch the session from the garage; it feels like sitting in the headmaster’s office, wishing to be back in class.

"It was an innocent mistake, I was doing multiple laps on the medium tyre and was really trying to find the limit. Obviously I went slightly over, I had a big snap out of Turn 9 and was drifting for a long time, hoping I wouldn’t hit the wall.

"But these things happen; you just have to put it behind straight away you and get back on the horse."

Mercedes, which has introduced an upgraded power unit in Canada, was dominant in FP1, but its rival Ferrari team locked out the top two spots in the second session.

Tech chief James Allison said the team was now expecting "a good old fight between us and Ferrari, who we have long feared at this track".

Valtteri Bottas, who in Hamilton's absence finished FP2 0.134s down on the pace-setting Ferrari of Charles Leclerc, said his Mercedes "feels strong" but stills needs work in terms of balance.

"The car became more difficult to drive with the changes we made for FP2, but it also felt a little quicker," Bottas said.

"It's nice to have a new engine with a bit more power; it's not a huge difference, but you can feel it, and it's a really good feeling.

"The car seemed strong on both long and short runs, but Ferrari was very quick on the straights, so I expect it to be a very close fight tomorrow."