Mercedes had ruled out two-stop strategy before race 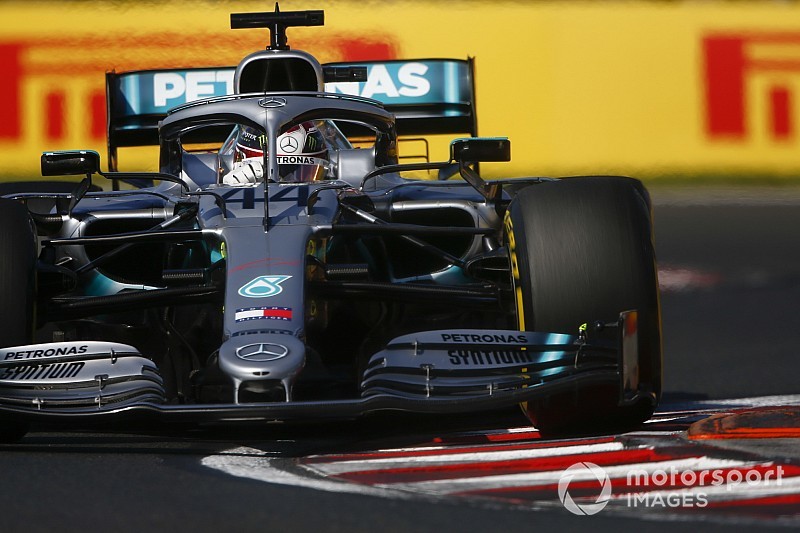 Lewis Hamilton says Mercedes had actually ruled out the two-stop strategy "gamble" he used to overhaul Max Verstappen to win Formula 1's 2019 Hungarian Grand Prix ahead of the race.

After Verstappen and Hamilton broke clear of the pack early in the Hungaroring event, Mercedes opted to extend Hamilton's first stint when Verstappen switched to hard rubber.

Hamilton stayed out for six laps and then used his newer rubber to quickly close in on the Red Bull before Mercedes pitted him again to switch to fresh mediums and a two-stopper.

The reigning world champion initially questioned the move as he had to close a 20-second gap in the race's final third, but he rapidly cut Verstappen's advantage as his rival lost performance on his aging hards and took the lead with a move around the outside of the first corner with four laps remaining.

"It will be interesting when we go back and talk about two-stop, because today this morning we talked about pit strategy and they said two-stop is not going to happen," Hamilton said in the post-race press conference.

"And even when we called to do a two-stop, I was like 'Jeez I don't know how this is going to work'.

"It felt like a big gamble for us, and at the time I felt like I had the pace on Max [on the hards].

"I don't know if he was backing off, but I felt like I may have [had] a few attempts at trying to pass him.

"But at some stage the tyres are going to go off, so I don't know how many attempts that would be. I really don't know how long I made those mediums go [at the end].

"I think it was just collectively a really bold, risky strategy call, and just doing the job at the end of the day.

"I had to do those laps to chew up the gap that he had on me - I think collectively as a team we did a really exceptional job."

Hamilton explained that he had to "put all doubt and all question marks out of my mind" to cut Verstappen's late-race advantage.

"[I just had to] do the best laps I could do, every single lap, with consistency and not dropping at any time whatsoever," he continued. "I had one of the more consistent period of laps that I think I've had.

"I don't know if he had traffic or whatever mistakes, but it looked like the gap started to drop down quite quickly and I think with four laps to go, five laps to go, I had four seconds ahead and I could see him in my sights, maybe struggling with his tyres.

"I was like 'OK, we've got a serious race on here' - and it felt like the steepest kind of wall to climb when I'd come out that far behind.

"But the team had relaxed faith that we'd do it - so I'm grateful for their hard work."

Verstappen: Hamilton push showed "how much margin" Mercedes has

Dan Wheldon: Has it really been three years?