Lewis Hamilton believes Sebastian Vettel wrongly moved twice during their Russian Grand Prix battle and would have caused a crash had the Formula 1 title favourite not braked. 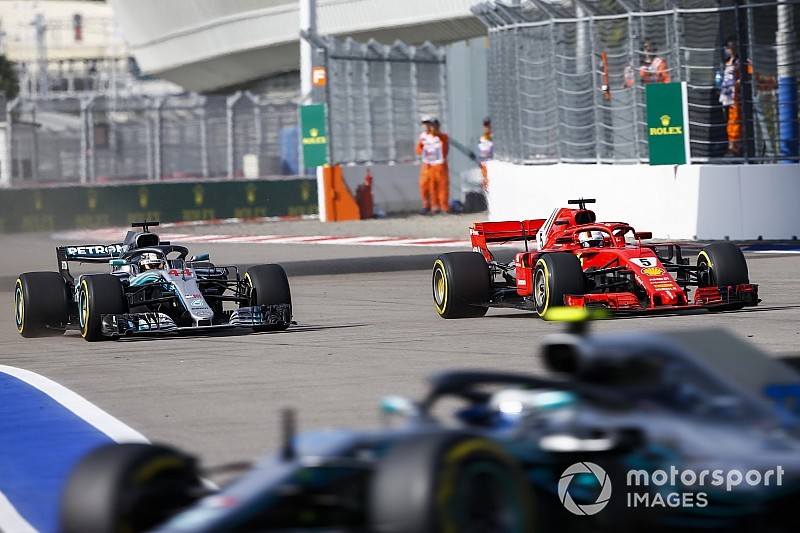 Hamilton dropped behind Vettel due to a Mercedes error leaving him out too long in his first stint but caught his championship rival and attacked on the run down to Turn 2.

Vettel moved to the right once and then moved further across, prompting an investigation that ended in no action being taken.

"It was quite frustrating once I came out behind both of them [Vettel and early race leader Valtteri Bottas]," said Hamilton

"I had grip in the tyres and I was like, 'I've got to take the opportunity now to race with him'.

"I slipstreamed down and I pulled out. From my view, Sebastian moved and then moved again. At the time, if I didn't brake I would have been in the wall. We would have crashed.

"It felt from my cockpit view that it was a double move, which we often talk about that we shouldn't do. Luckily I got away with it."

Vettel's defence forced him to run deep into the corner and Hamilton drew alongside the German on the outside of the long left-hander that followed.

Hamilton, who admitted "I was quite forceful at the next corner", toughed it out on the dirty part of the track and Vettel was forced to cede the position into the right-hand Turn 4.

Vettel said his defence was only to try to cover the inside, not swerve on Hamilton.

"I had a bit of a wobble into Turn 13, a lock up, and Lewis was quite close," Vettel said. "He got DRS down the straight, I saw him coming.

"It's very difficult to see with the mirrors but I thought I moved before the braking. I wanted to make sure I covered the inside. I didn't mean to be an irritation at any point."

Hamilton leads Vettel by 50 points in the championship with five races left of the season, and interjected Vettel's answer as they sat beside each other in the post-race press conference.

"In the heat of the moment it always feels one way," said Hamilton. "You might watch it and say 'yes I moved twice'."

Moving under braking and two changes of direction while defending are the two main problems the stewards assess during a battle if there is not a collision to investigate.

FIA race director Charlie Whiting explained that the stewards took "quite a lenient view on that" because they felt that Vettel's move "in reality didn't constitute two changes of direction".

"Their decision said that it was one change, but with a little hesitation in the middle," said Whiting.

How Mercedes made a win feel like a defeat