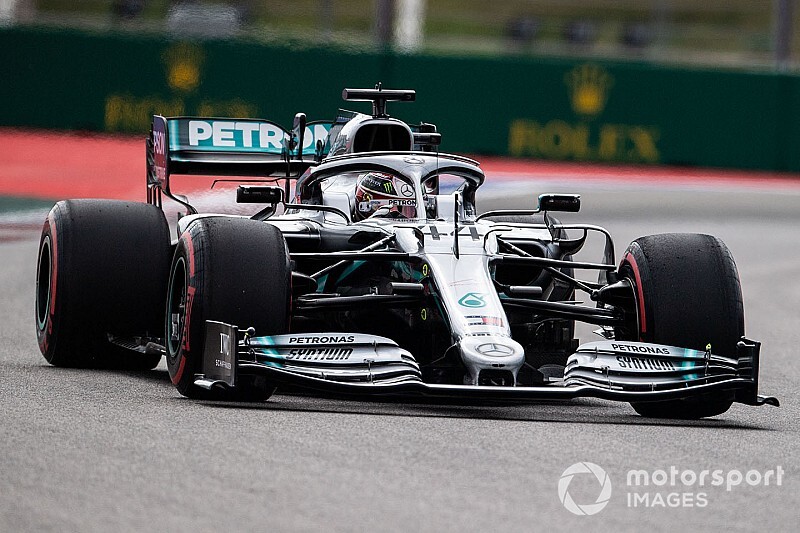 Lewis Hamilton says recent Formula 1 qualifying laps have felt worthy of pole position but his front-row start for the Russian Grand Prix is still "quite an achievement".

Ferrari's Charles Leclerc has taken all four poles since F1 returned from its summer break and Hamilton has been resigned to starting second in the last three grands prix.

The Mercedes driver was delighted to split the Ferraris in qualifying at Sochi, where he likened his rivals' engine advantage to having a "jet mode".

Asked by Motorsport.com to assess his performance in the context of the advantage he feels Ferrari has, Hamilton said: "I feel like the last couple of laps have been pole-worthy in terms of how it's come together, and optimising what's in the car.

"Naturally they are faster than us and Charles has done a good job but I mean in terms of being as close to the limit as possible.

"I've just been getting more and more comfortable in the car in the second half of the season, even though we've lost a little bit of performance compared to them.

"There is still work to do collectively, all of us including myself."

Hamilton stressed he did not want his belief his laps were pole-worthy to be taken "the wrong way".

"I just mean in terms of putting the perfect lap together I feel like each time I'm getting as close to that as possible," he added. "Then you finish the lap and it's quite a long way off pole.

"But it feels like quite an achievement to get in between the two Ferraris who have a bit of a delta to us at the moment."

Hamilton felt his lap at Sochi, which hauled him to the front row ahead of Sebastian Vettel, was "really good" and similar to the effort that earned him second on the grid in Singapore.

However, he said he was already around three tenths down after the start-finish straight, which made it "very, very hard to catch up".

"The last lap was the best of the weekend, as it should be, no mistakes or anything like that," he said.

"I really feel like I got everything and maybe a little bit more from the car to split the Ferraris again, which is not an easy task."

Mercedes opted to qualify both Hamilton and teammate Valtteri Bottas on medium tyres in Q2, which means they will start on slower but more durable rubber than Ferrari.

Hamilton said Mercedes had to try something different to beat its rival after three consecutive defeats.

"It will be tough off the start tomorrow but even if we were in the lead, or we were pole, they are just so fast on the straights," he said.

"By the time we get to Turn 1, the little kink, they [would] blast past us with the jet fuel or whatever it is!

"It's going to be about strategy, that's why we're on the different tyre. I hope we can utilise that and keep the pressure on."