May 26 (GMM) Lewis Hamilton and Niki Lauda have slammed those blaming a bulldog called Roscoe for the 2008 world champion's competitive dip.

Briton Hamilton has been outqualified by his teammate and 2013 pole master Nico Rosberg three times on the trot, and many are pointing fingers at the former McLaren driver's new freedom at Mercedes and a dog he walks in the paddock.

"How the hell can a dog be distracting?" Hamilton said in Monaco after qualifying second behind Rosberg.

"I don't really know how I could live my life any differently, so if people have a got a problem with that then that's their problem." 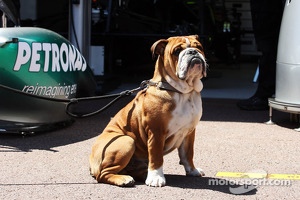 "He should be allowed his freedom to do what the f--- he lucks," the plain-talking Austrian told the Mirror.

"If it makes him happy, he will be a better sportsman."

Hamilton said his slight deficit to German Rosberg in the sister silver car at present is just part of his acclimatising to life at Mercedes, following an entire career with McLaren.

"I can't say I'm doing anything different in the car," he insisted.

"I think it's just because I'm still learning a new car."

And Hamilton said going through a slight dip of performance is not new to him.

"It doesn't hurt," he said. "I've been very fortunate to have lots of experiences like this in the past -- with Fernando Alonso, with Heikki Kovalainen and with Jenson Button.

"It doesn't make me doubt my abilities. It just makes me want to work harder."

Team boss Ross Brawn also expects Hamilton to bounce back soon, but he also thinks Rosberg will never be a pushover.

"What I think is that it will be pretty even spread between the two of them -- at least I hope that is the case, as we don't want one driver dominating the other," he told F1's official website.

Brawn told Germany's Auto Motor und Sport that it's obvious Rosberg has the upper hand at the moment.

"At this high level, little things play a big role," he explained.

"Nico knows every button in the car and could drive it almost asleep. Lewis is still working on it and we're also learning about him; what he needs from the car.

"He will also get the maximum from the car, but Lewis also knows that he is fighting against an extremely talented teammate," added Brawn.

Most teams struggling to survive - Fernley