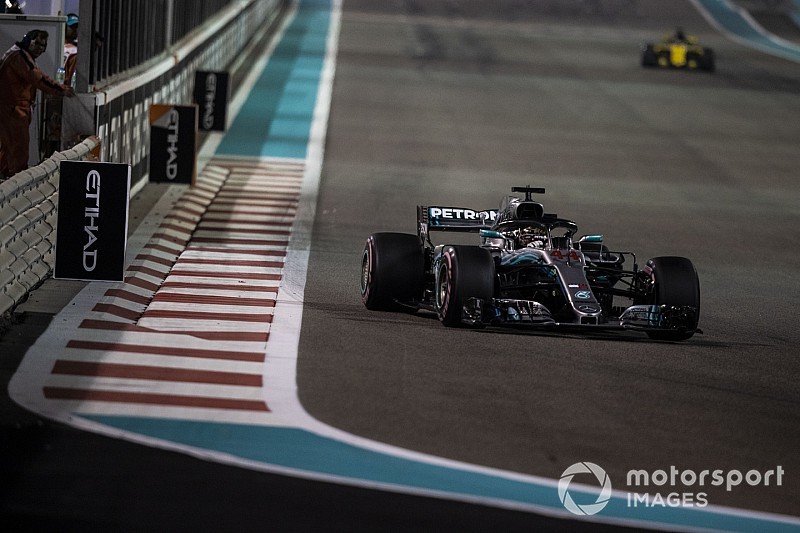 Lewis Hamilton says he and Mercedes are already working on addressing what they think will be a ‘weak spot’ in Formula 1’s new aero regulations next year.

Changes to the wing and bargeboards for 2019 aimed at improving overtaking have triggered a pretty major redesign for teams, and could serve to shake up the order.

Reflecting on a meeting he had with team personnel in Abu Dhabi on Friday to discuss 2019 plans, Hamilton says that they are already identifying the key areas they must focus on if Mercedes is to retain its place at the front of the grid.

“On Friday, sitting just talking to a couple of individuals who are not usually here but are up-to-date with next year’s car, we sit and have this in-depth conversation and it’s inspiring,” he said.

“They are so smart, incredibly intelligent and they think on a completely different wavelength to the normal person.

“Ultimately I want to make sure, through our debriefs, they’ve not misinterpreted something. For example, I know what I need in this car to make it faster and I’ve got to make sure that I communicate that with them so that they go and build and find that performance.

“For next year’s car, I have an idea where the weak spot will be with these new rule changes, as do they.

“[It is just about] working closely, communication and we’re all of us constantly working so closely together, really elevating each other and I think this year, if you look at the team’s performance on the race weekend, that our mechanics, our engineers, strategists, we’ve all raised our game."

Although rival Ferrari is hopeful it can move forward in 2019 and Red Bull believes a switch to Honda power will help its performance, Hamilton has faith that Mercedes has the qualities needed to not fall back.

“As long as they don’t do that, I believe that we’ll be able to stay on this path and continue to fight at the top.

"But Ferrari have been doing an amazing job this year so we cannot take anything for granted, we’ve got to keep the hammer down, keep pushing as they will be.”