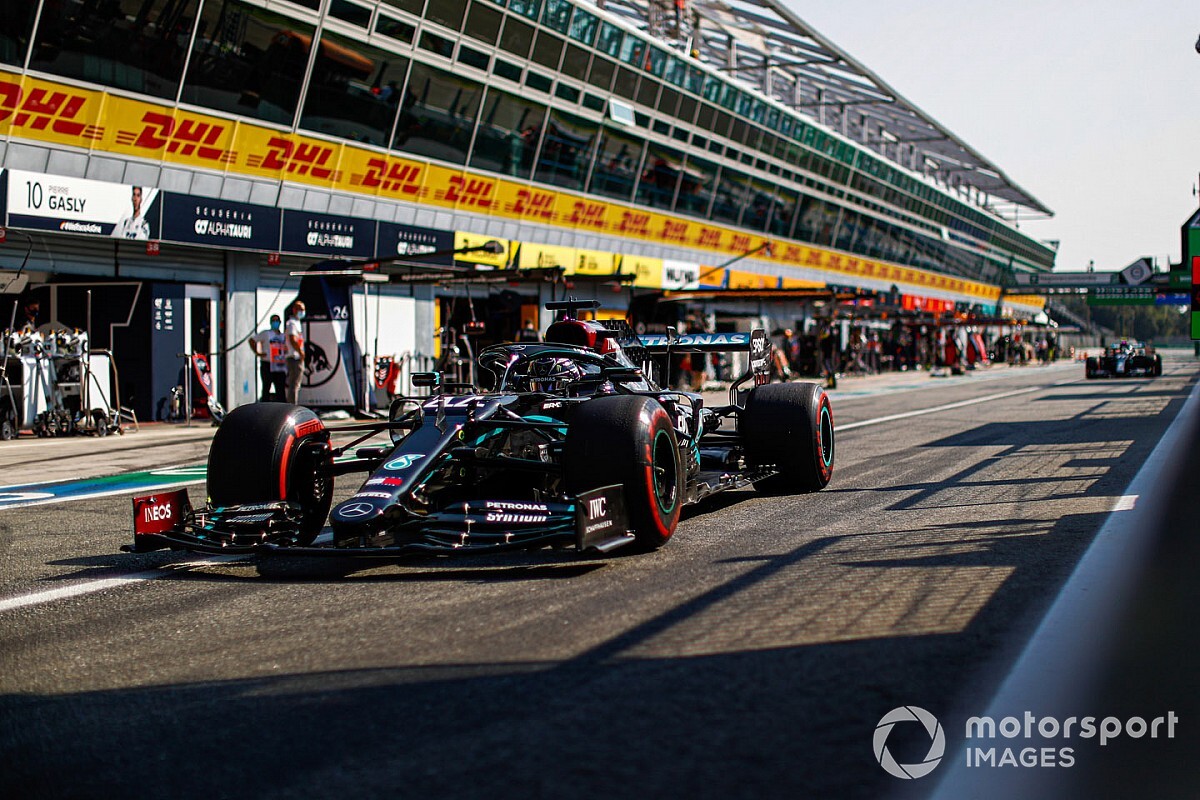 The Mercedes Formula 1 team has taken steps to ensure that it doesn’t repeat the mistake of missing the pit lane closed message on the FIA timing screens.

Lewis Hamilton pitted in the Italian GP just after the pit lane was closed after the safety car was dispatched to allow the retrieval of Kevin Magnussen’s stranded Haas, which was parked between the final corner and the pit entry.

The pit lane closed decision was issued by the FIA 11 seconds after the safety car went out, but the Mercedes team failed to spot it, and Hamilton entered the pits some 10 seconds after that.

Hamilton subsequently received a 10-second stop-and-go penalty that cost him a likely victory, while Alfa Romeo’s Antonio Giovinazzi received the same penalty for an identical transgression.

Mercedes is creating new software that will ensure that its engineers get notification of the pitlane closed message, having hitherto relied on someone noticing it on the timing screens.

“In terms of the sequence there were two pieces of information to tell us that the pitlane entry had been closed,” said Mercedes chief strategist James Vowles in a team video.

“The first was there were boards around the track that have a cross on it, a red cross indicating that’s the state, and when the driver sees that, he knows he must stay out.

“The second piece of information is we have TV screens in front of us. One of those is called page three and it contains a number of messages that the FIA wants to send us. That could be a yellow flag or safety car deployed, and one of those was the pitlane entry was closed.”

Vowles admitted that he, engineering chief Andrew Shovlin, sporting director Ron Meadows and others were focussing on the impending pit stop, and thus missed the message.

“This was a key point in the race where the entire field would have come into the pitlane,” said Vowles. “Lewis came on asking for a different set of tyres, we were reviewing whether or not we had time, whether it was the correct decision or not.

“These were all conversations that take just a few seconds, but they all add up. What you are not doing particularly is looking for a single line on the screen to indicate the pitlane entry was closed.

“Both Shov and myself have been through similar instances, 2016 was the last time this happened in Brazil, it happened twice there but it was clear that the pitlane entry would be closed then. There was a crash and almost a huge amount of debris, you wouldn’t want to drive into the pitlane at that stage.

“This was different, it didn’t really prompt us to necessarily look at the screen and look for a single line that was hidden amongst other information and we missed it. It didn’t take us long to spot it.”

Nevertheless the team saw the message in time to tell Valtteri Bottas to stay out. Vowles insists that rivals also took time to spot it, but because their cars were further back, they were able to give their drivers the appropriate instructions.

“We were able to still keep Valtteri out and for reference we can hear from other team radio that it took them about 10 seconds to notice it as well and that 10 seconds was the crucial period where because Lewis was so far in the lead of the race he was just able to come in.

“With all the benefit of hindsight we know what we would do differently now. We can put systems in place in software that will enable us to find and ensure that we see these critical messages in just a few seconds.”

Vowles says the team doesn’t blame Hamilton for missing the red cross signals out on track.

“He was just turning into Parabolica at that point, still at full racing speed.

“The driver there is trying to control the vehicle and just at that point also was getting himself down to the correct delta time for the safety car and preparing for the stop because we had already called him to come into the pitlane.

“There was a lot going on for him, and it’s not typically to be looking at a board that is on the far left-hand side of the track.

“There were two boards. The first would have been very difficult for him to see, one was on the left-hand side but as I say he was in control of the vehicle looking at the dash and he didn’t see it.

“As you come towards the pitlane entry if you look on board with Lewis, there is actually no indication at that point that the pitlane is at all closed. There are no further boards, there is no light, there is nothing to tell him anymore that it should be closed.

“So, from his perspective it would have been a very difficult call, just a matter of seconds to look up, look in the correct place and make a judgement call.”