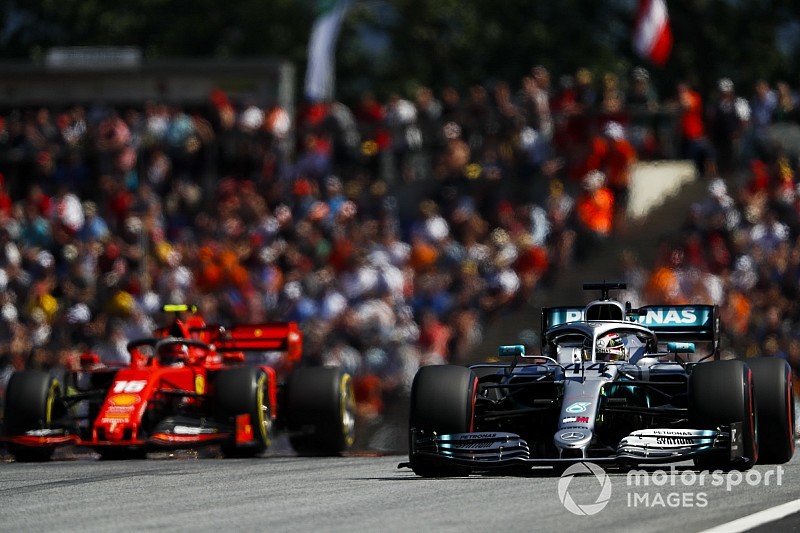 Leclerc set two laptimes good enough for pole as Hamilton improved on his final run to jump from fourth to second, 0.259s off the pace.

Though the long straights at the Red Bull Ring were expected to bring Ferrari back into the fight after a disappointing French Grand Prix, Hamilton admitted Leclerc’s speed through the rest of the lap was also a surprise.

“We’ve been chipping away at it but from the get-go we noticed a bit of a deficit to the Ferraris,” said Hamilton. “We thought it would be a bit closer than it was.

“They eked out some more time in FP3 and then in qualifying. We definitely underestimated how fast they would be, I would say.

“On the straights they really kill us, they’ve got that extra bit of power that works really well here.

“I guess they’ve managed to figure out how to get the car to work around the medium- and high-speed corners.”

Hamilton qualified on the medium tyres in Q2 whereas Leclerc opted for softs, but was then penalised three places on the grid for impeding Kimi Raikkonen and will start fourth instead of second.

“If we get to start the race with those guys it will be quite a fun race,” said Hamilton. “This is a track you can follow a bit more but it will still be tough at the top between us.

“I think the Ferraris are very quick on their long runs, it will not be easy to keep up with Charles but I’ll give it everything I have. If I can stay in the tow, for example, and be there on a different tyre.

“Them starting on that tyre, I would tend to think that means they’re going for a two-stop, most likely. Unless the tyre goes a lot further than we anticipate.

“I don’t have their numbers but the medium tyre I think will go a bit longer. A one- and two-stop is pretty close, so how you work them will be interesting.”