Hamilton: Mercedes "down on power" against Red Bull, Ferrari

Lewis Hamilton has blamed being down on power against Red Bull and Ferrari for Mercedes failing to seal a spot on the front row for the Brazilian Grand Prix. 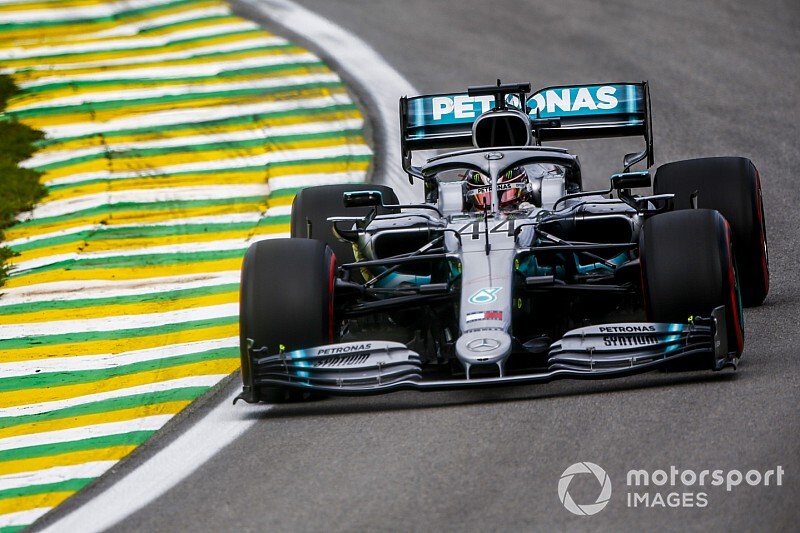 The world champion ended up third on the grid at Interlagos, just 0.191 seconds behind pole position man Max Verstappen, but says his fate was pretty much sealed by how much quicker his rivals are on the straight.

"We seemed quite competitive in P3 but then we seem to lose when we're going into qualifying, or they gain," he said.

"But nonetheless, I'm really happy that I was able to divide the Ferrari. It's always a tough challenge, but we've been down on power, I guess, compared to the others particularly.

"That's where we lose most of our time. But nonetheless I gave it absolutely everything I had."

Hamilton said that the time loss on the straights was "quite a chunk", with Mercedes have recently suggested that its power unit does not perform as well at high altitude as some of its competitors

However, Hamilton was happy that his final lap of the session was good enough to seal him a spot on the second row.

"I just kept chipping away at it," he said. "The last lap was actually as good as it could be for us, and the car felt pretty good. We were just lacking a bit of pace on the straights. But hopefully tomorrow that will be good in terms of [tyre] longevity."

And although Hamilton has now sealed his world title, he sees no reason to adopt a vastly different approach to the race in his bid to win.

"I mean my approach has been pretty much the same way all year long," he said. "But maybe we can try and be a bit more aggressive tomorrow.

"I don't particularly see there is any reason to make any changes from where I am today. So I will continue like that."