Hamilton: Q3 error down to "slacking" in middle sector 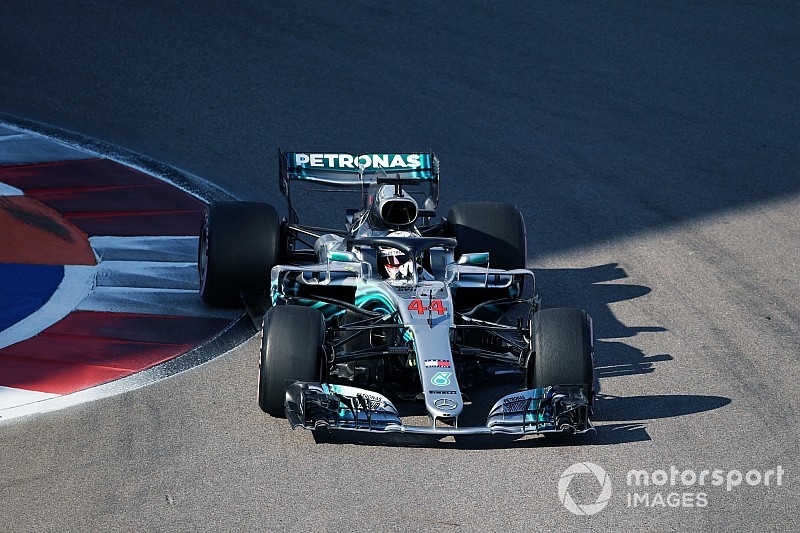 Formula 1 points leader Lewis Hamilton says he had been “slacking” in the Sochi Autodrom's second sector during Russian Grand Prix qualifying, which contributed to his error in the decisive final lap

Hamilton had led Mercedes teammate Valtteri Bottas in all three practice sessions of the weekend, as well as the first two qualifying segments.

However, he was left 0.004s down on Bottas after the opening runs of the Q3 pole shoot-out, with the time gained on the Finn in sectors one and three not enough to make up for the quarter-second loss in the middle part of the lap.

Hamilton was once again significantly up on Bottas in sector one on his final attempt, but overshot the entry into the Turn 7 right-hander, running well wide and ruining the lap, ending the session second to his teammate.

“I don't know where it really got away from me in Q3, but I struggled a little bit, and Valtteri obviously picked up quite a bit of pace,” Hamilton explained after qualifying.

“I think middle sector was really where I was slacking, but anyways it's great to have a 1-2.”

Asked by Motorsport.com whether the time he'd been losing in the second sector played a part in the mistake, he said: “Yeah, I think the middle sector I haven't been too bad through qualifying - Q1 was really good, and then Q2 wasn't so great.

“Just generally throughout the weekend it's been a bit up and down through that sector, but I've been quick in the first and third.

“The first lap in Q3, down three tenths in the middle sector but I was quickest in the first and last.

“So anyway I did push quite a lot because I knew also he would gain time, so it was not three tenths, it was like half a second I needed to improve.

“I just over-egged it a little bit. I think I picked up a little bit of dirt on my outside tyres and then there was less grip there for the next corner.”

With Hamilton's chief title rival, Ferrari's Sebastian Vettel, finishing a distant third, the Briton was not too dismayed to miss out on pole.

“Big congratulations to Valtteri, he did a great job in Q3,” Hamilton said. “It's been a really good weekend so far, honestly, really can't complain.”