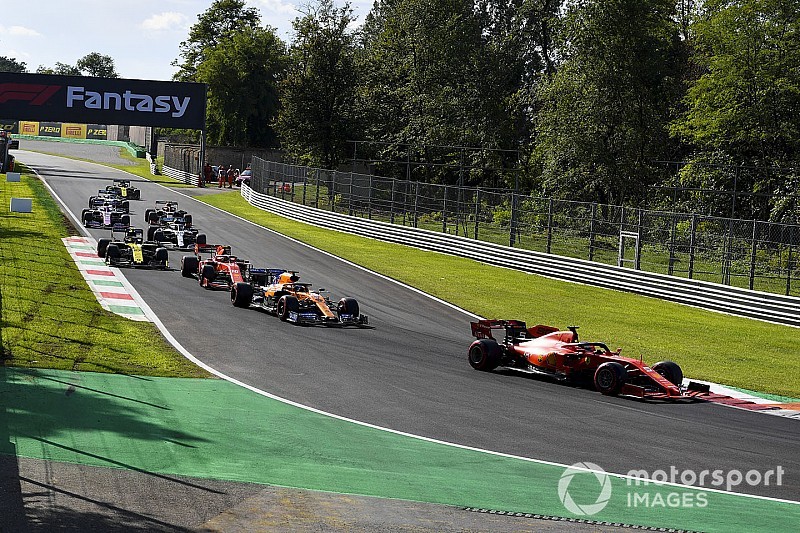 Lewis Hamilton thinks the changes needed to avoid a repeat of the farce that marred the closing minutes of qualifying for the Italian Grand Prix will only come when there is a crash.

Most drivers who made it through to Q3 failed to set a second laptime when, after deliberately slowing down to try to stay in a train of cars for a slipstream, they ran out of time.

The behaviour of the drivers is under investigation by the FIA, with Nico Hulkenberg the first to be called to see the stewards for having driven off the track at the first chicane in a move that appeared to be to avoid himself running at the front of the pack.

Hamilton, who missed an attempt to try to knock Charles Leclerc off pole position, labelled the situation "dangerous" - just a week on from making a similar remark in Belgium when drivers also deliberately slowed down to better get a slipstream.

The world champion suggested that only an accident would prompt action for change.

Asked if there was a risk of the situation being repeated again, Hamilton said: "I am sure it is going to be continue, as positioning is key.

"If everyone is going out so late it will continue to be an issue in places where you particularly need a tow. It won't be until someone crashes that they will change."

One suggestion Hamilton did have to sort the matter would be introduce a different qualifying format for venues where the tow was so extreme.

"We are all trying to get a gap which continues to be key," he explained. "In some places you want a bigger gap, and some places it is about the tow. These are track specific.

"I always thought they could do something different on different weekends anyway depending on the track but highly unlikely that will happen."

Pole position man Leclerc hopes that F1 would learn lessons from what happened in Italy to try to ensure things improve for the future.

"It is only a few tracks where we have this issue," said the Ferrari driver. "I have no quick fix to try and help this quickly, but maybe we can all think about it to try to understand.

"It has always been like this, and slipstream has always been this way. We just need to analyse a bit more the situation. Today was special and definitely not intentional from our side, as Seb was also capable of having the pole position and we didn't want to sacrifice one car for the pole of the other.

"It was quite tricky. I definitely think that situations like after the second corner should not happen. When two cars are side by side, they cannot go at 20kph. We could not go past and most of the cars behind wanted to pass, but didn't have the opportunity."

Hamilton agreed that F1 should look at ways of making things better, and look beyond handling out penalties to drivers.

"It is the system that needs to shift a little, but I don't think we need to start handing out penalties. We need to look at it and reflect and see what we can do to make it better: make it better for the fans and make it less dangerous.

"Already they made a change today that we had to finish the out lap with a certain delta time but even that is too slow. There are improvements we can make for sure, for safety and for the spectators that watch."