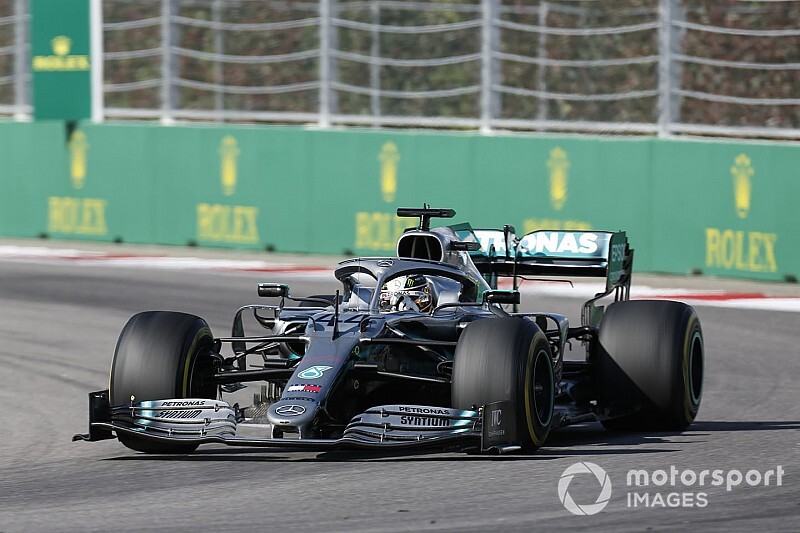 Mercedes Formula 1 driver Lewis Hamilton says he was trying to "do qualifying laps every lap" to keep pace with Ferrari in the first phase of the Russian Grand Prix.

The championship leader trailed Sebastian Vettel and Charles Leclerc during the opening stint at Sochi as Ferrari cemented its qualifying advantage and Mercedes committed to staying out longer on harder tyres.

Hamilton eventually took the win when Vettel retired with a suspect MGU-K failure and triggered a virtual safety car that allowed Hamilton to make his pitstop under a caution period and jump Leclerc, who had to pit earlier because he was on softs.

"When we did the laps to the grid, I didn't have a lot of grip," said Hamilton when asked about the significance of starting on medium tyres.

"I was a bit worried. And then we lost a little bit from the initial phase [of the start], but then I wasn't able to get to the tow because he [Leclerc] stayed on the left and gave Seb the tow.

"I tried to sneak in behind Seb but there was a McLaren there so I had no tow down to Turn 1 and I nearly lost another place.

Hamilton remained in DRS range of Leclerc during the first three laps of the grand prix but was more than 3.5s behind by lap 10.

By the time Leclerc made his pitstops that gap had come down by a second, while Hamilton had cut two seconds out of Vettel's race lead and was just five seconds behind when Vettel pit a few laps after Leclerc.

Mercedes' plan was to give Hamilton enough of an offset to come back at the Ferraris towards the end of the race, but Hamilton admitted afterwards that starting on the softs would have been better.

"Before the race we sat down and had our estimations of whether the soft tyres will last or not – either we'll be correct or they'll be correct," said Hamilton.

"Ultimately they were right, because the soft tyre was much stronger than we anticipated. Keeping up with their consistency and their speed was so hard. I wasn't expecting that."

While Mercedes was fortunate the safety car swung the race in its favour, Hamilton hailed his team's efforts to be in a position to capitalise.

"This weekend we knew that we had have to pull more out of this car and there was more potential there, but we didn't know where it was," he said.

"I think we pulled ourselves a little bit closer to the Ferraris this weekend and it was just enough to get ahead of them."